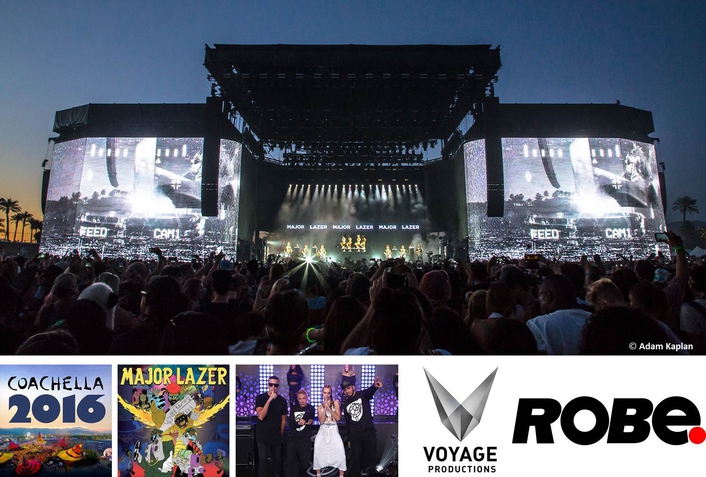 Major Lazer unleashed their new live show – which will be touring throughout 2016 – at the Coachella Valley Music & Arts Festival in Indio, California – playing two amazing Coachella (main) Stage sets, one on each weekend of the 125,000 capacity festival, one of the U.S.’s highest profile music events.

The show-stopping performance with all the energy, excitement and superlative sounds you’d expect from a Major Lazer experience.  The show featured a complete new set, lighting and visuals design by Kyle Kegan of Voyage Productions and utilized Robe BMFL Spots, BMFL WashBeams and ColorStrobes - amongst other lights. All the Robes were newly purchased by Rainbow Production Services (RPS).

“Those strobes are simply mind-blowing!!!!” declares Kyle, using them for the first time after receiving a demo and swapping the originally specified product for the new ColorStrobes!

He loves the colors, the mapping capabilities and the sheer retina-burning intensity … “At times you could hardly look at the stage they are just so bright – that’s what a strobe is all about!” he says with a giggle!

Major Lazer’s new stage set includes eight 3-sided Periactoi-style 13ft high towers which are about 7ft wide (6 were used at Coachella). The first facade is a scenic speaker cabinet design trimmed with LED tape and with LED blinders hiding in the cones. The second is an LED video surface … and the third contains moving lights and the Robe ColorStrobes! A pair of ColorStrobes is positioned on each of three levels - top, mid and bottom - of the tower.

The lights are all rigged on a trussing section that is also the structural backbone of the tower, and these have been custom engineered and fabricated by Rainbow for the tour.

To say the ColorStrobes and the towers ‘kicked ass’ would be an understatement!!!

He notes that as their first Robe purchase, they were immediately struck with the robust build quality of all the products. 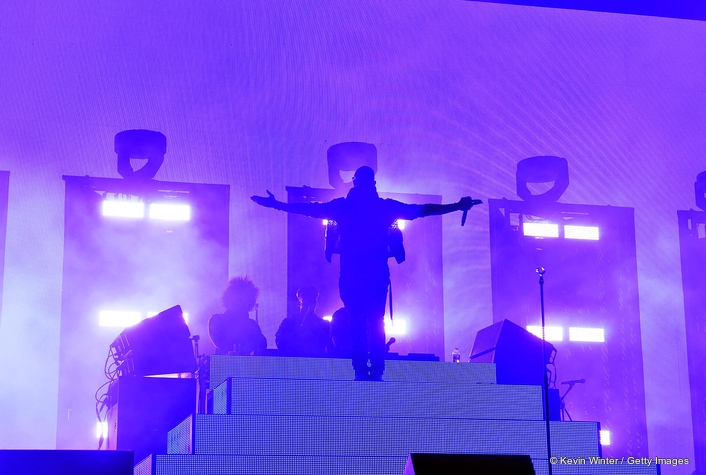 The BMFL Spots were used six a side, on the floor and on cases to vary the height, providing powerful cross lighting for the dancers in the fast-paced, fully choreographed show. Kyle was using them only at about 50-60 percent intensity!

The BMFL WashBeams – which are even brighter - were located upstage on the deck, dotted in and around the set pieces onstage, used for beam and wash effects and to help light the other set pieces.

“They are bright, fast and the optics are great,” Kyle comments. He’s been using Robe products in his work for several years, with the newest ones becoming more prominent on his specs as Robe has brought super-bright products like BMFL, Pointe and ColorStrobe to the market.

Chad likes having three power settings on the BMFLs and is also impressed with the optics and the shuttering.

The entire Major Lazer festival lighting package is designed to be wheeled onto stage and up-and-running in 20-30 minute changeover slots, but in reality the crew achieved this even quicker at Coachella, a serious feat for the first time ‘in situ’ as Major Lazer readied for their highly memorable primetime sunset slots that captivated their audiences. 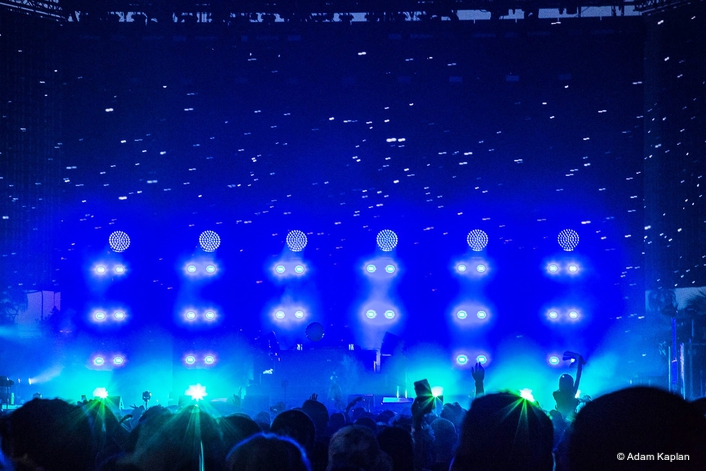 In addition to Major Lazer, Kyle and Voyage Productions also designed a new set as well as lighting and visuals for Jack Ű who played both weekends on the Outdoor Theatre Stage. This was based on a giant scenic Apple Macintosh ii classic computer, complete with giant floppy drive, rodent, etc. For this, he also utilized eight of RPS’s BMFL WashBeams, placed behind the computer for big ACL looks, and the 12 x BMFL Spots which were dotted around on the deck.

The festival package version of the new Major Lazer design featured at Coachella, and the full touring version – with lighting, sound, video and staging provided by Rainbow Production Services - can be seen at a combination of Major Lazer’s own headline gigs and festival headline slots throughout Europe and the US this summer, with two complete duplicate systems in operation.

Other Robe products in action at Coachella 2016 included 66 x Pointes used by Steve Lieberman on the Yuma Stage from Felix Lighting; 90 x Pointes and 48 x BMFLs on the Sahara Stage, supplied by Felix Lighting and Zenith to AG Production Services who also created the environment with their Mega Structure Mini enclosure; Felix provided Robe ColorStrobes to Ice Cube for their main stage set and to Halsey for her performance on the Outdoor Theatre stage.