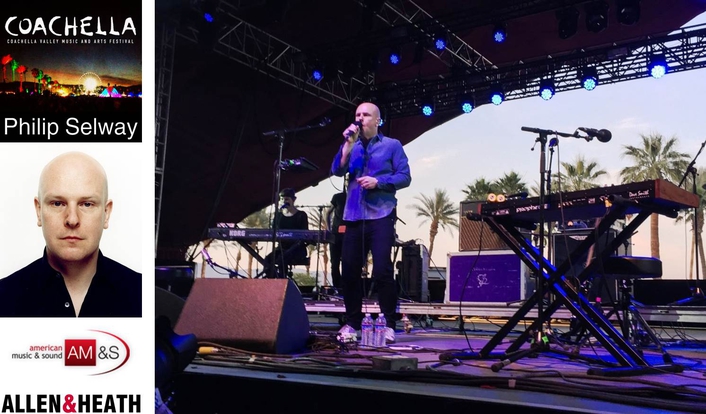 Allen & Heath’s iLive-T112 was the digital mixing system of choice for Philip Selway’s solo performance at Coachella Valley
A multitude of fans were entertained by Philip Selway’s solo performance, which used Allen & Heath’s iLive-T112 at the Coachella Valley Music and Arts Festival in Indio, California, USA.

Philip Selway, best known as the drummer in Radiohead, performed nearly an hour long set Sunday evening at Coachella, Weekend 2. Selway didn’t play drums but instead sang and played the keyboard in the Gobi tent. According to Rolling Stone magazine “Running Blind,” “Around Again” and “A Simple Life” revealed a thoughtful, gifted musician at work.

The audio engineer for Selway’s solo tour, Gavin McComb, explains how the Allen & Heath equipment is currently being used. McComb controls the FOH mix, while the band controls their own monitor mixes using the ME system.

“On this leg of the tour we are using an iLive-T112 surface, an iDR-48 and a ME-U with five ME-1personal mixers. They are all using in-ear monitoring, which is fed from their individual ME-1s. The only control I have with their mixes are mutes on channels that are not in use on certain songs. This is important as we have many open mics on stage, which can make monitoring a little swampy unless the various mics are muted when not in use,” said McComb.

All processing and FX are from the built libraries within the iLive system, which means there is no need for peripheral outboard gear. “Like I have said all along, from when I started using the iLive system, the internal FX and processors are very, very good,” he said.

iLive and engineer Gavin McComb, during set up

McComb is enthusiastic about the iLive-T112 and loves the features that come with it. “So far I have not found what it cannot do, so really it has all the features a touring audio engineer needs. It is a great sounding system. I would say that engineers who have found themselves stuck in the rut of Yamaha, Digidesign, Midas, etc. should give Allen & Heath products a real try,” he said.

Selway plans on performing at another upcoming music festival, Lollapalooza in Grant Park, Chicago in July. For more of his tour dates please visit http://www.philipselway.com/tour-dates/.