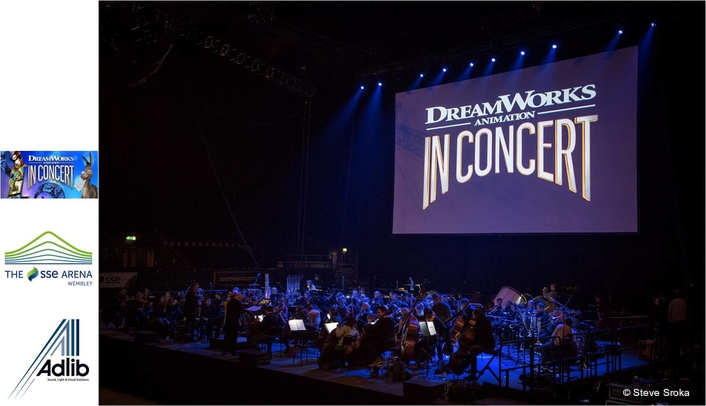 The Orchestra at work

Adlib supplied full production – sound, lighting, rigging and large format video projection - for a special one-off event at the SSE Wembley Arena in London, ‘DreamWorks Animation in Concert’ which was presented by DreamWorks Animation, CineConcerts, and The MJR Group. It featured music and many memorable moments from DreamWorks Animation’s numerous hit films like Shrek, Kung Fu Panda, How to Train Your Dragon and more with music performed live by The Royal Philharmonic Concert Orchestra.

Video
As you would expect, video was right at the core of the technical production and a starting point for the entire concept.
Adlib’s Charlie Rushton and John Haggart ensured that this all ran smoothly, starting with the large 40ft wide x 22.5 deep projection screen as specified by the production. Adlib has a number of Stumpfl screens and this one – a 40 ft. wide Vario 64 – was chosen for its quality and precision as well as the modular construction which ensures a nice rigid surface. 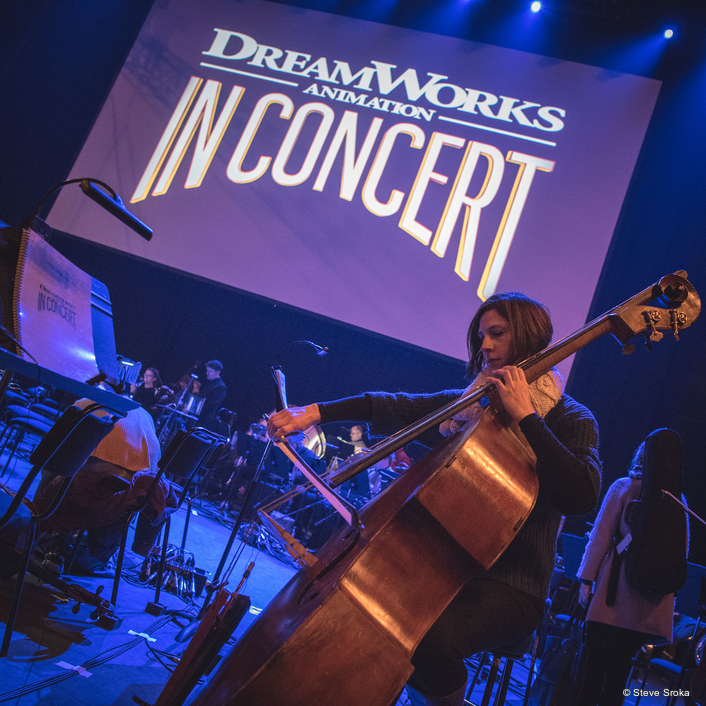 The powerful front projection system consisted of a double-stacked pair of Panasonic DZ21Ks.
The content was fed via the production’s CineMuse system servers and playback set-up running over Adlib’s fibre signal network. One feed was routed to the projectors and another to conductor Benjamin Pope’s stage monitor so he had a clear view of the animations at all times.

The biggest challenge for this aspect of the production was physically getting the screen built and floated in a timely fashion, allowing the orchestra to come in to a clear stage in time for rehearsals.
Due to the screen size, the build process occupied the entire stage and Adlib provided a dedicated crew to deal with its flying.

The Stumpfl product was also picked for the speed at which it can be assembled, which was of the essence here, with pre-rigged lighting trusses selected for the same reasons – so they could be wheeled in pre-loaded with fixtures and quickly picked up and flown to ’floating’ height. 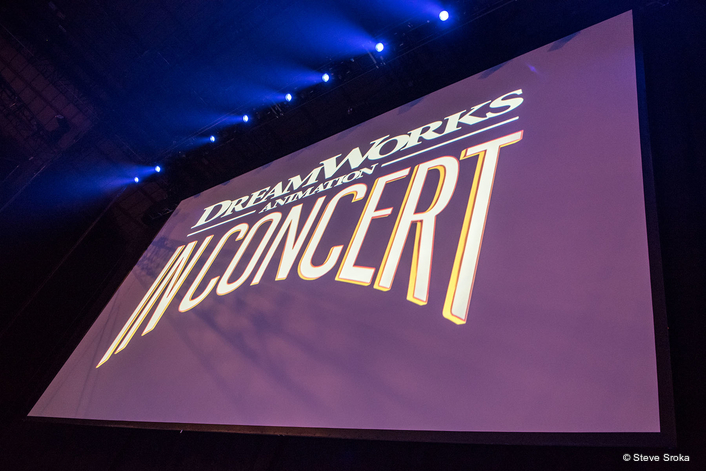 Audio
PA techs Otto Kroyman and Jethro Hall looked after the system, with Terry Smith and Chris Snow co-ordinating everything at the stage end.
They worked alongside the production’s FOH engineer Sylvain Denis and CineMuse’s Marko Ambachtsheer.
An L-Acoustics K1 System was specified for its universal popularity and appropriateness for delivering premium quality audio for arena shows and events. From experience, Adlib’s team knew it would provide exceptional coverage in the venue.

The system was a careful combination of L-Acoustics K1, K2 and KARA loudspeakers.
The main hangs were 12 x L-Acoustics K1 a side, with 4 x KARA-downs and the side hangs were 8 x K2 a side, with KARA also used for infills and outfills.
The low end of the spectrum was covered by the new L-Acoustics KS28 subs, six a side which were ground stacked in front of the stage.

All of these speakers combined to ensure a crisp, precise sound image across the whole arena, which is vital for delivering classical music in this environment.
The whole system was driven by L-Acoustics LA12X and LA8 amps and one of Adlib’s standard Lake LM44 control racks was used for zone control, EQ and signal distribution. 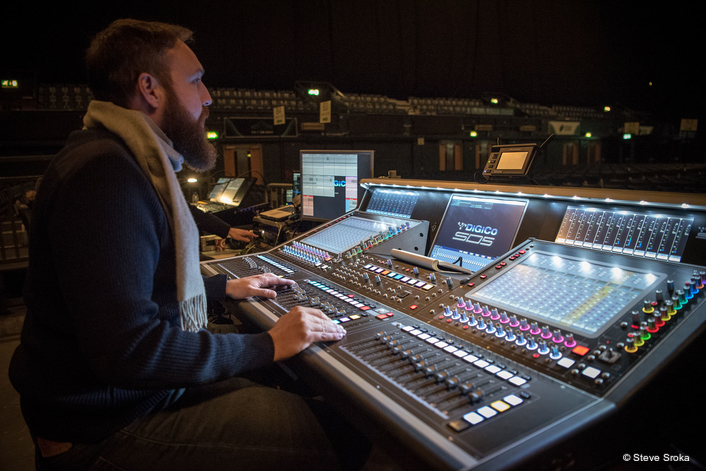 With over 80 inputs, a DiGiCo fibre loop system was installed in conjunction with 2 x SD racks at stage end and a mini rack at FOH to accommodate the large channel-count. Sylvain’s console of choice was a DiGiCo SD5 positioned at FOH.
“The most important challenge” commented Richy Nicholson, “was the tight timescale. Planning was key, so we worked alongside Barry Jepson (PM) and Sylvain ahead of the show to ensure there would be no surprises on the day. With such high channels counts, a very skilled crew was required to deal with the complexities of the set up and execute a practical, methodical plan resulting in flawless coverage”.

Monitors were controlled from FOH. The strategic location of upstage wedges and “fill speakers” helped the orchestra achieve a consistent stage sound and Ben Pope the conductor, a vital link in the whole show delivery, had a shout system to help with cues and other instructions.
A mix of DPA 4011 and 4099 mics covered the large string sections, with Neumann, Sennheiser and Shure covering the rest of the orchestra, as per Sylvain’s specific requests.

Lighting
Dave Eldridge and Adlib’s lighting specialist Tom Webber created a design based on the requirements from DreamWorks and Barry Jepson. They were asked to specify a package to illuminate the orchestra and provide subtle but effective keylight whilst ensuring that the projection screen remained the centre of attention.
Tom worked on site with Jon Barlow who tech’d both lighting and video and dedicated lighting tech, Ash Dawson. 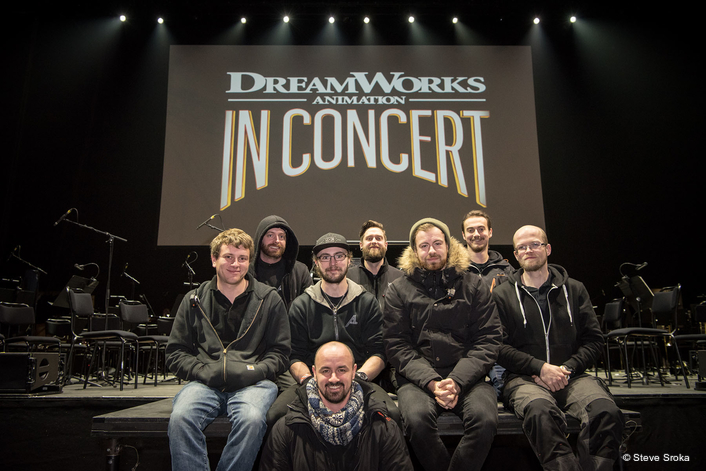 General orchestra lighting was kept low and understated, John Henry’s supplied illuminated music stands to enable the musicians to see their scores and conductor Ben Pope was lit from the back truss allowing the performers to see him clearly at all times.
Four trusses were utilised, the most upstage made up from Prolyte H40V for flying the screen and some drapes immediately behind.

The back lighting truss was Prolyte S36 pre-rig, with 10 x Martin MAC Viper washes positioned on it for covering the orchestra, plus two MAC Viper Profiles providing the all-important elegant return light on the conductor.
The front truss was also made of S36 pre-rig, containing eight MAC Viper washes giving a general stage wash, plus four Viper Profiles for additional conductor key light.

Finally the projector truss was flown just upstage of the front truss.
Vipers were chosen as a versatile source offering all the features needed for appropriately lighting the performance. A grandMA2 light – Tom’s console of choice - was used for lighting control.

Client Manager Phil Kielty commented; “To be part of something iconic and memorable in Wembley Arena was a privilege. All of our team worked extra hard alongside Barry, MJR & CineConcerts to ensure that the audience could just fall into watching the movie moments whilst enjoying the incredible orchestration. We really enjoy the richness and experience of delivering these orchestral projects and look forward to working on many more in the future.”