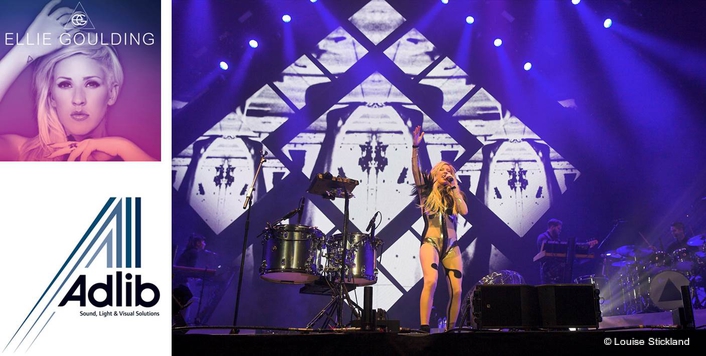 Adlib has worked as the audio supplier for Goulding’s live work for some time. Tony Szabo (KSE) was the Systems Engineer for the K1 system as specified by Joe Harling, with whom Adlib has also worked with previously on Lana Del Rey. Michael Flaherty and Steven Montgomery were the other audio crew members.

The main system for the two week tour comprised 14 x K1 speakers a-side with 4 x KARA downs at the bottom as the main left & right arrays, with side hangs of 8 x K1s and 4 x KARA downs, together with a centre cluster of 4 x KARAs.

Szabo initially suggested the centre cluster – installed conveniently on one of the lighting trusses for the European theatre tour preceding this arena run – to improve the front of stage coverage and increase the gain-before-feedback that would have been an issue if relying on covering that area with standard infill cabinets.

It made a massive difference to the quality, power and dynamics of the overall sound so they decided to continue the concept in the larger spaces. The extra effort entailed in the rigging each day proved well worth it!

The front fills were 2 x KARA and 4 x ARCS cabinets per side. They also toured four ARCS2s which were flown on their sides as an upstage hang to cover the 220 / 230 degree seating angle … with the shows all completely sold out as Goulding’s popularity continues to soar.

The subs were 16 x L-Acoustics SB28’s, arranged in a left-centre-right configuration.

The system was designed to be adaptable so it could be individually tailored to each venue on the itinerary.

At the largest arena, the O2 in London, the front hangs were increased to 16 x K1s with the same 4 x KARA downs. Adlib had just taken delivery of its second batch of K2’s, so the side hangs were both made up from 6 x K1s with 12 x K2s underneath.

Utilising the K1 / K2 combination gave an extremely neat and streamlined looking array as the speaker width is the same, with the signature K1 sound packaged in a medium sized cabinet with wider dispersion and lighter weight.

For delays at the O2, they utilised two hangs of V-DOSC, positioned level with the FOH mixer position to cover the top level of seating. All the elements were driven by L-Acoustics proprietary LA8 amplifiers.

The system proved ideal for Ellie Goulding’s lively and energetic performance, her animated band and for highlighting her refined & unique vocal style.

Adlib uses all the latest Lake technology in its control and processing racks so they ran LM44s at FOH as a matrix and LM26s either side of stage distributing signal to the requisite amp racks left and right via Dante - keeping the signal in the digital domain from the DiGiCo SD10 console at FOH to amp world. 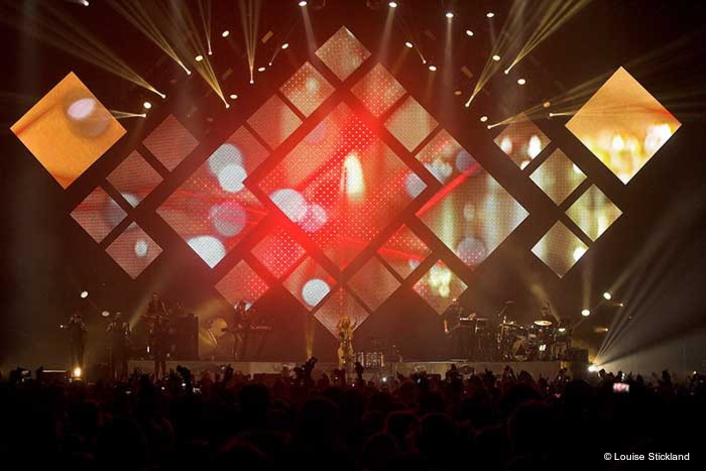 At FOH, Harling had a Waves server interfaced with the DiGiCo SD10 to manage his Waves effects, and a DiGiGrid MADI to Cat 5 interface which was used for recording and playing back the show, primarily to provide a source for virtual sound checks.

Adlib bought two DigiGrid MGB interfaces especially for the tour to allow both Harling and Neale to record each performance.

Neale mixed the monitors using a DiGiCo SD7 console which he loves for its capacity, features and elegant sound. He had eight band mixes plus Ellie Goulding, all of whom used IEMs with their own JH Audio custom moulds. So … it was a nice clean stage.

Adlib supplied a Sennheiser EM3732-Mk2 radio system with SKM5200-Mk2 handheld microphones and MD5235 capsules which was combined with the band’s own mics, including Sennheiser SKM2000 handhelds. Goulding’s mic was fitted with a DPA d:facto II vocal mic capsule.

James Neale has worked with Ellie Golding since 2010 and also has a long standing and highly productive working relationship for and with Adlib. He comments that the service – as always – from the Liverpool based company has been “Excellent”. 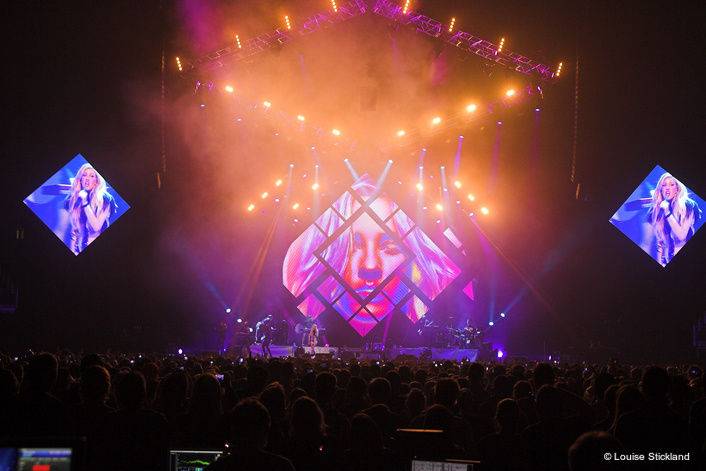 Adlib Director Dave Jones says “We’ve been fortunate enough to work with Ellie Goulding for nearly 5 years now. She is an outstanding artist and multiple award winner with a growing fanbase worldwide plus a great team around her. The O2 show was a particular highlight for many fans and the industry alike … and it’s fantastic for Adlib to be part of such a passionate group of people!”.