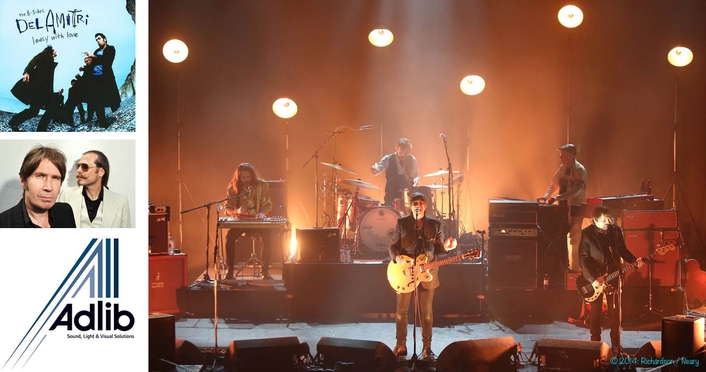 .
Twelve years after their last concert tour, popular Scottish alt rockers Del Amitri reunited and hit the road for the first time in 12 years with lighting, sound and expertise supplied by Liverpool based rental specialist Adlib.

Adlib were extremely proud to be working with the band again for the hugely successful tour which played three weeks around the UK and Ireland, including an acclaimed sell out show at the new 9000 capacity Hydro Arena in their hometown of Glasgow.

The band included Justin Currie & Iain Harvie, with Kris Dollimore on guitar, Andy Alston on keys and Ashley Soan on drums, all members had featured in one of the original line ups but had not played together at the same time. The legendary Quinner (Ian Quinn) was on the road again with the band as their Tour Manager , with Derek Fudge as production manager and nearly all of the original crew.

Adlib’s FOH Engineer Dave Kay mixed the last gigs they did back in 2002, and in the meantime he’s stayed in touch with lead singer / bassist Justin Currie and worked on several of his solo projects. Kay was absolutely delighted to be asked back, “Great people, great music and it’s been a lot of fun” he comments.

The tour encompassed a wide mix of venues – starting in a pub in Ireland, it went through several arts theatres before settling into a run of concert halls and the Hydro Arena – so everyone on the production team had to be flexible in their approaches.

They toured one of Adlib’s Coda PA systems, and also hooked their control into the house racks-and-stacks when this was the best and most practical option, which included all the venues with Adlib installations – Leeds and Bournemouth Academies and Cambridge Corn Exchange.

The Coda touring system comprised 12 x Coda LA12 speakers per side with 8 x Coda SCP subs a-side ground stacked, together with Coda ViRay cabinets used for balconies, in and out-fills.

Kay chose the Coda system because of the hi-fidelity sound of the band, the complexity of their mix and the system’s real adaptability. “They are great players and I wanted a fully transparent sounding system with good dynamic range” he explains. 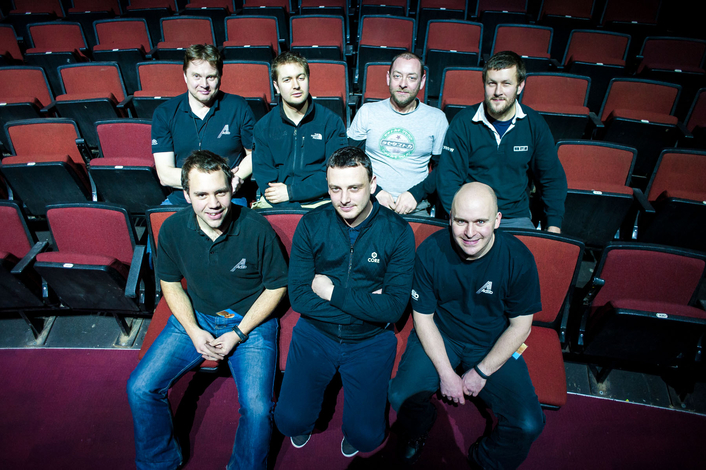 For the FOH set up however he decided to go retro and analogue with a Midas H3000 console plus a big rack of outboard.

“This worked very well the last time I worked with Del Amitri, so I decided to adopt the ‘if it ‘ain’t broken don’t fix it’ philosophy … and went analogue”.

It was clearly a good decision.

Kay loved mixing analogue, “If you don’t actually need digital snapshots and scenes ,,, then it is exceedingly quick and very reactive way to operate, there is so much visual feedback from an analogue console, and  with a great sounding desk like the H3000, you can create a lovely, warm, rich mix. Plus, as the resolution of modern loudspeaker systems increases, you can now clearly hear the differences between different types of digital consoles, analogue is still the benchmark” 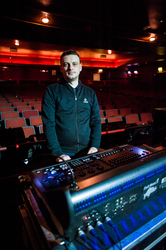 The 40 input console was filled to capacity, and he used the stereo returns for his effects. The usual Adlib Lake processing rack at FOH handled all the system EQ and time alignment.

Pressure pads were linked to the backing vocal mics which switched them on and off to reduce guitar spill and other sounds coming off the stage.

Sam Proctor was Adlib’s FOH tech, and all the shows were recorded using a DN9650 network bridge, part of the Midas PRO2 set up used by Monitor Engineer Marc Peers.

Peers has also worked for Del Amitri before for about 4 years at the end of the nineties and early noughties. “I actually can’t believe it was 12 years ago” he remarks, adding that it felt just like yesterday the first time he walked into rehearsals.

Like Dave Kay he was also really pleased to be back, and the fact that they are all accomplished musicians made it “Like slipping on a pair of comfy shoes!”

He chose a Midas Pro II console for the monitor mix so he could keep the onstage footprint extremely tidy – a bit of a contrast to the large area he needed when running  in analogue mode back in 2002!

The band use a mix of wedges and IEMs, so Adlib supplied eight of their low profile MP4 wedges, together with two L-Acoustics ARCs and an SB28 sub per side for side-fills plus a Sennheiser G3 system for the three band members on IEMs were - Justin Currie, lead guitarist Iain Harvie and drummer Ashley Soan. On MP4 wedges were - Kris Dollimore and Andy Alston on guitar and keys respectively.

“Technology has moved on exponentially since the last touring work, so the IEMs provided the main monitoring and the wedges were there for ‘additional weight’ and back-up” says Peers, who, like Kay, went straight back to having the excellent rapport with the band that he has always enjoyed.

“They are all experienced, they know how they want to sound and they are also prepared to listen to ideas - thoroughly professional, really pleasant people …and a great rock band!

Lighting was designed by Adlib’s Ian Tomlinson who’s brief was to create a cool  theatrical style show with no manic strobing and visual craziness. They carried their own rig and also made use of some of the house lighting rigs where appropriate.

Their rig was based around three trusses with nine Martin MAC 700 profile moving lights on each of these and a grey cyc hanging off the rear truss.

On the floor were six Altman Scoop Lights on wheeled stands. When practical - depending on stage space - these were moved manually during the set. They started at the back and were moved in by the lighting crew to surround the band for the acoustic section, and then back upstage when that was finished. 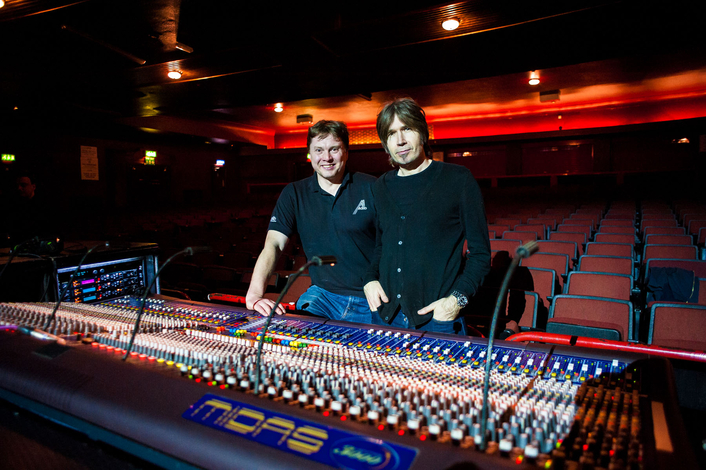 The Scoop which loosely resembles a large PAR, produces a diffuse, soft-edged beam of light and in an ideal fixture for color blending and creating smooth, even washes.

Also on the floor were 12 x MAC Aura LED washes dotted around, and seven Chauvet COLORado LED battens to up-light the cyc.

“The design underlined an old-skool concept and presented it with a modern twist stated Tomlinson, who also loved working with the band and getting into the whole Del Amitri vibe.

Adlib Managing Director concluded “I went to the Liverpool show and it was frustratingly brilliant…brilliant because it was one amazingly crafted hit after another, with a phenomenal band playing better now than ever. The combination of Dave Kay, the band and the incredibly defined CODA system, produced great audio. Brilliant because the majority of the crew on it where the original guys with the band providing a genuine and warm touring atmosphere…frustrating because I wasn’t mixing it!

Truly awesome band and people,… an honor to be associated with.”