Adlib Enjoys A Day to Remember 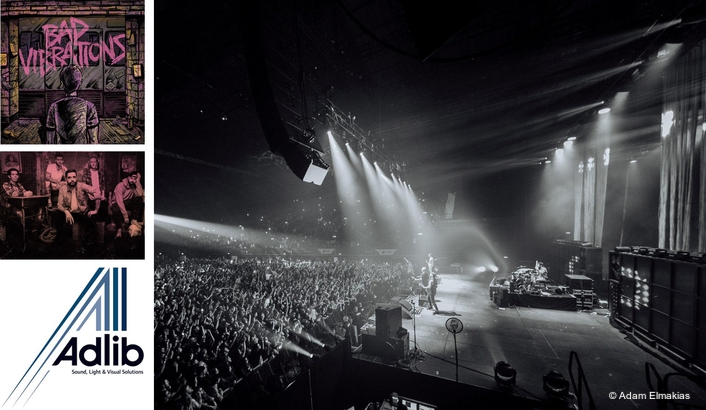 ADLIB’s busy start to 2017 has included supplying a full arena sound system for the European leg of A Day to Remember’s “Bad Vibrations” tour, complete with a consoles / control package for the other sections of the tour.

Adlib’s Sam Proctor and Mike Flaherty have been working closely with the band's own system tech Justin Lenards to fine tune the system each day for their engineers Nate Northway at FOH and Adam Schuler on monitors. “They are all great people to work with and we’ve really enjoyed being on the tour as well as supplying a suitably punchy system to match the energy of the (punk metalcore) music,” stated Sam.

Adlib has previously worked on UK arena tours with ADTR and their late FOH engineer / tour manager Jeff Kaplan, and was delighted to reunite with these very exciting live artists now being production managed on the road by Jacob Raggio (also known for his work with Slipknot).

The L-Acoustics PA was chosen for its power and dynamics - to match the intensity of the band. In its largest format, the main hangs were 14 x K1 per side with three KARA downs, a well-proven arena configuration which is great for loud and even room coverage. These main hangs were complimented by side arrays of 12 x KARA stage left and right.

Giving the all-important bottom end, some serious oomph came from 24 of the new L-Acoustics KS28 subs positioned across the front of stage, selected for their extra 3 dBs of SPL over the standard SB28 subs. They are also a lot tighter which has an audible effect explains Sam.

The speaker-count included a selection of KARA lip fills and ARCS2 infills, and the system was driven by 16 x L-acoustics LA8 amps per side with three LA12 a side powering the subs.

The FOH console of choice for Nate was a Midas PRO X. He ran a Neutron NB dual network bridge expansion module at FOH giving an additional AES 50 outputs into the DL451 I/O outboard insert rack.

Also in the I/O rack, they ran a DN9650 multichannel interface as an AES to MADI converter going through a ProTools HD rig for recording and providing material for virtual sound checks. This proved a great tool for exciting the room with a whole range of transient sounds that will be present during the show.

The band still do a physical sound check, but the virtual one enhances and optimizes the process, minimizing the time the band need to spend onstage and allowing the audio team to be well ahead when they arrive.

They also utilized two KT DN 9620 AES extenders running down a fibre multi to the stage, feeding into a DL351 stage rack.

The challenge each day was the get the maximum SPLs jumping around the room for A Day to Remember’s enduringly enthusiastic fans – known for their loyalty and dedication to the music and style which inspired the foundation of the Self Help Fest event in the U.S.

Onstage, Adam specified a Midas PRO 9 monitor console which he ran without any outboards using the DL431 input splitter preamps, and he also looked after the ProTools rig running various tracks. 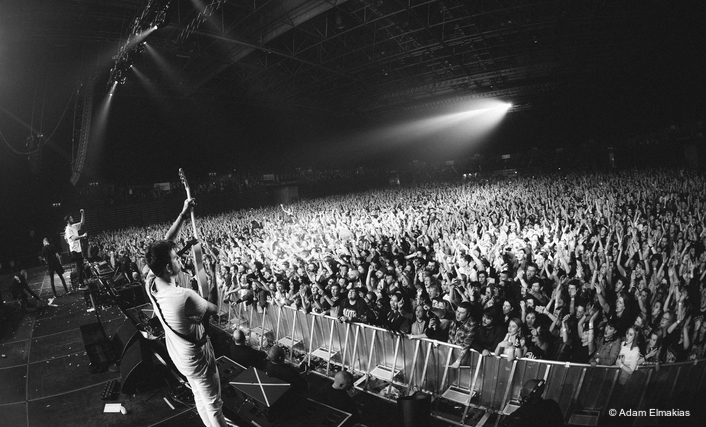 For additional atmosphere, they used a combination of floor monitors, including a pair of d&b M2 wedges at the front, plus side fills of two L-Acoustics ARCS with an SB28 sub underneath fills. To doubly reinforce the low end, drummer Bobby Scruggs had a couple of d&b QSUBS.

Singer Jeremy McKinnon uses a wireless Shure UR4D mic fitted with a Heil RC35 capsule as his standard, which is ideal for the potency and presence of his voice.

Adlib Client Manager Phil Kielty commented, “It has been great to get back together with ADTR again. Jeff Kaplan would be proud I’m sure of the incredible show they put on, especially at Wembley Arena. Jake Raggio has been great to work & deal with, he sets the tone for a happy & appreciative camp. We can’t wait to work with everyone again.”

Production Manager Jake Raggio stated, "My philosophy is that it's all about the people. Phil and Dave at Adlib make sure they only send out the best people for the job. Sam Proctor & Mike Flaherty in addition to Justin, made sure that we were cared for at the highest level in every single gig. In addition to providing a great kit with an efficient build and tear down, we had some of the finest techs in the world, making sure that each gig went as well as it could have, in any scenario. They make it easy to come back time and again!"

Specials tour for ADLIB
Adlib supports Death of a Bachelor!
Adlib Puts its Hands in the Air for Creamfields 2016