Adlib supports Death of a Bachelor! 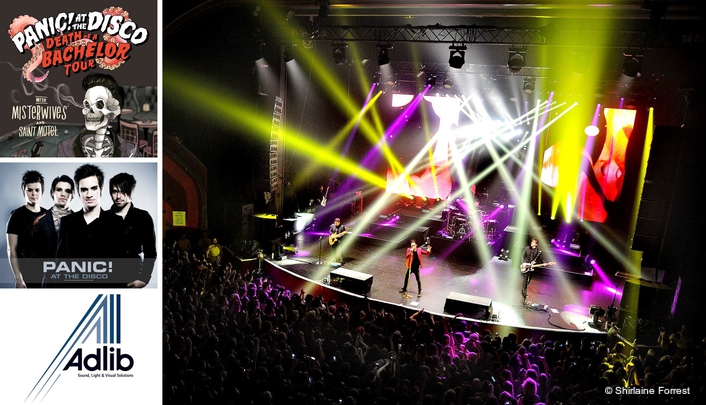 Adlib renewed its excellent and long term working relationship with Grammy nominated US rock band Panic! at The Disco, providing sound, video and lighting production, plus crew for their recent UK and European tours. Once again Tony Marino was at the helm as the highly-respected tour manager. The band released their fifth studio album, ‘Death of a Bachelor’ in January 2016 and have had a mega busy year.

Lighting designer Alex Specht took a floor package for the European dates, which was supplemented by a full overhead rig and video for the high-profile UK gigs in Manchester, Cardiff and two sold out nights at London’s Alexandra Palace where this leg of the tour came to an exhilarating end.

The high-impact floor package comprised two grids of 3 x 5 Ayrton MAGICDOTs which were built into special roll-on-roll-off dollies designed by Adlib and streamlined for quick deployment of the 30 MAGICDOTs upstage. There were also two Atomic strobes attached to the dollies, with four more dotted around the risers.

In front of the dollies on flight cases were four Claypaky Mythos plus two more either side downstage, giving a total of 10 Mythos, which offered many options due to their great flexibility.

Six Sharpy Washes were joined by six Chauvet STRIKE 4 LED blinders - a fixture in which Adlib has invested in this year due to rising popularity. These were all dotted around the three-tiered band riser with the piano upstage centre, drums in front of that, trumpets either side and two levels of steps at the front descending to stage level.

For the UK production was ramped up spectacularly. The MAGICDOTs were extracted from the dollies and the frames butted together upstage to create the 'Great Wall of MAGICDOTs' which was sub-hung from a rear truss and flanked by two 5-metre-high by 3 metre wide portrait format Absen A3 LED video screens.

For travelling, the MAGICDOT frames were fitted into meat racks instead of the original dollies. 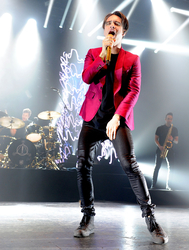 Three trusses - front, mid and back - were installed to provide standard lighting positions over the stage and populated with 16 x Claypaky Mythos’ as the main hard-edged / beam moving lights and 16 x Martin MAC Quantum washes for the wash movers.

Dotted around the back and mid trusses were eight Atomic strobes, with more STRIKE 4’s on the front and mid truss.

A grandMA2 light was supplied as Alex’s console of choice.

Two Green Hippo Hippotizer Karst media servers were used to store and play back all the video content which was timecode triggered. The content was supplied by Panic!’s production and had been created ahead of their summer shows in the US.

Tom Webber looked after the lighting package on the European dates and was then joined by Adlib’s Mike Summerfield, Jon Priest and Peter Lea, all of whom really enjoyed working on the tour.

One of the visual high points of a set action-packed with great looking moments, was a rousing rendition of Queen’s iconic ‘Bohemian Rhapsody’, - officially released as a cover in August this year - complete with video parody of the legendary rock anthem. The show was full of dramatic hard-hitting lighting interspersed with some more contemporary looks, all clearly inspired by classic rock lighting.

SOUND
For audio, Adlib supplied a complete control and monitor package for the European leg of the tour, tech’d by Julien Helme in Europe, adding a full L-Acoustics K1 / K2 racks-and-stacks system for the four UK dates and joined by Tony Szabo and Gavin Murray

Alexandra Palace was the largest iteration of the system, for which they installed 10 x K1 speakers a side, each K1 array had four KARA downfills. This was supplemented by the usual Adlib formula of two delay hangs of 8 x K2’s positioned just behind FOH. These same K2 hangs had been the side hangs in Cardiff Arena which is a wider lower room.

Now being able to fly off the main arch, which is part of the Alexandra Palace building superstructure, it is possible to attain the optimum 10 metre positions stage left and right for the main arrays, so everyone in the centre could enjoy a full sonic experience.

Sixteen KS28 subs were positioned under and next to the stage in a stack of two and then three and then another three stacked with four ARCS front fills on top.  L-Acoustics KARA speakers were utilised along the front lip of stage to cover those fans who managed to get the prime viewing position dead centre of the barricade. 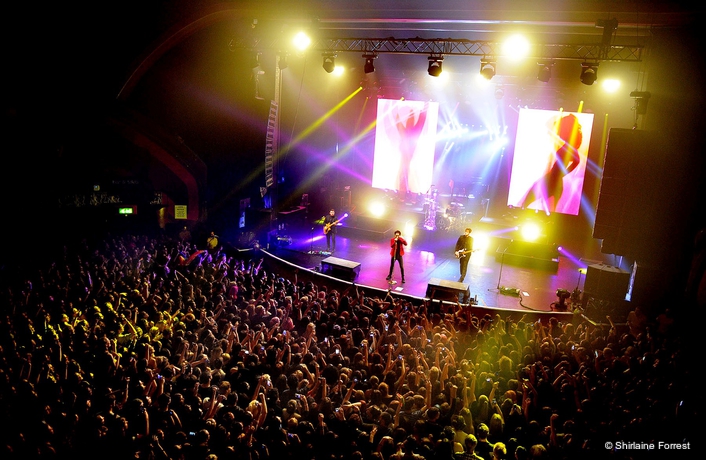 The subs and K2 were powered by the new L-Acoustics LA12X amplifiers with the rest of the system driven by LA8’s as Adlib have been growing their stock of the new amps. Adlib’s Lake Control rack dealt with the system EQ and signal distribution and runs over fibre and Dante. Tony has recently implemented Smaart v8 to sit alongside his Meyer SIM3 as his long time “go to” tool for system time alignment and tuning.

The Control rack utilises two Mac Mini’s in a Sonnet rackmount.  These computers are configured for redundancy and run everything to do with the system – L-Acoustics Network Manager, Smaart v8, Dante Controller, iTunes for wav playback, Focusrite RedNet. The Lake system is controlled using a Motion Computing tablet on 5G wifi. Finished off with a Lectrosonics HM/R400A RF system and Earthworks measurement mic.

A DiGiCo SD10 was specified by Spencer for FOH complete with SD rack and Madi interface, with an SD9 in the loop for the opening acts. The band supplied their own full set of Shure IEMs which were run with a set of Shure UHF-R wireless radio mics and control from Adlib who also provided a standard mics-and-stands package. 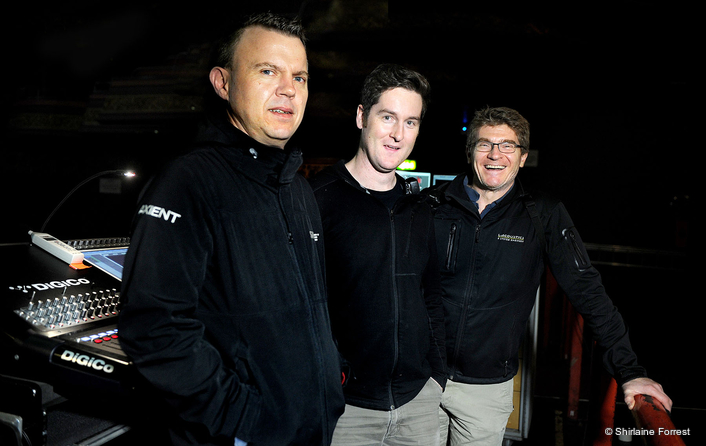 The challenge each night was getting the sound above the rambunctious loudness and piercing screams of Panic’s hugely enthusiastic fans who effortlessly hit the 112dBA mark as they become fully immersed in the set with the band.

‘It’s a tricky task, but Spencer has been doing it for some time and has fine-tuned his techniques to ensure everyone gets a fantastic sound” concluded Tony.

There was also a small stage package consisting of six Adlib bi-amp monitors plus the usual compliment of microphones, stands & cables for the opening act.

Phil Kielty Client Manager commented, “We’ve been incredibly fortunate to work with Panic! on and off for 10 years and seeing their live side evolve has been quite incredible. They came over in January and played an awesome and emotional show in Brixton, just after David Bowie had passed. Since then we’ve been with them from Moscow to Madrid and the energy put into the live shows is something else. Tony Marino and Spencer Jones have created a great family atmosphere amongst the crew, and it’s a huge pleasure to be involved.”

Panic at the Disco
ADLIB