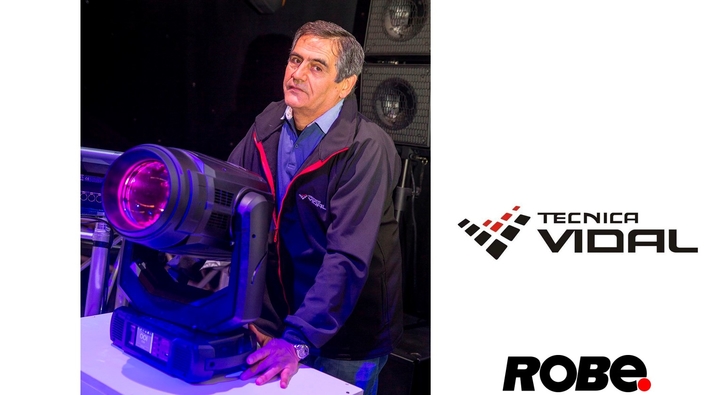 Tecnica Vidal is the largest rental and production company in the west of Argentina, and one of the top five in the country. Founded by Miguel Vidal in the 1980s … it is located in Rivadavia the centre north of Mendoza province, internationally renowned for its wine production.

The company has 20 full time employees at the moment and supplies the full range of technical production services, encompassing lighting, audio, video, staging, rigging and power, a ‘single-source’ solution business model that has proved very successful. Their specialist areas are concert touring, festivals, music shows and rental / staging, and they also have a healthy roster of corporate clients and event venues.

The first Robe investment was made in 2011 / 2012 when the brand was still emerging in Argentina. This was the first year of Robe’s partnership with Buenos Aires based TSD Group as a distributor … a move that has proved hugely positive and fertile!

Miguel had heard about Robe before he invested, mainly through travelling outside the country, but it was when TSD Group became a valued part of the Robe Family that he really started to check it out more seriously. His relationship with TSD and COO Daniel Lema goes back to the 1990s.

The first Robe purchase was MMX Spots, and he now has close to 150 fixtures in rental stock, the most recent purchases being 36 x BMFL WashBeams and 24 x Spiiders. They also have Pointes, LEDWash 600s and LEDForce 18 PARs.

The new BMFL WashBeams and Spiiders immediately went out on a number of different shows including concerts in the west of the country by Italian superstar Zucchero, UK rockers The Cult and Colombian singer Maluma for which Tecnica Vidal was the technical supplier.

Miguel first saw the BMFL in action on the famous Mendoza National Grape Harvest Festival two years ago and was blown-away with its power and features. He comments that he had heard about the luminaire, seen videos and images… but it was experiencing the full force of the BMFL and its many effects in situ that made him realise they were an ideal rental workhorse.

With the Spiiders, he knew an LED wash light would be a sensible and practical choice for multiple applications, and he also comments that Daniel Lema’s powers of persuasion were highly effective! Apart from that the colours and quality of light make them “an excellent complement to the BMFL”.

Typically the Tecnica Vidal crews will do all the prep, rigging and technical set up for a show or event and if there is a major artist headlining, they will most likely have their own LD with a design for them to work to. So this is a great opportunity to get their newest technologies in front of industry players.

His general impression of Robe – having seen the brand evolve substantially since the first investments six years ago, is that it’s a brand “with very strong growth in the market and with the savvy and foresight to be positioning itself for the future” when, he believes, it will continue to be an “industry leader.

He’s visited Robe’s HQ in the Czech Republic and was “massively impressed” with the set up and operation and the community and commitment that Robe has built in Valašské Meziříčí.

Technica Vidal crews all enjoy working with the Robe kit because it rarely breaks down, and it’s always their first option when specifying kit for a show. Consequently it’s very rarely in the warehouse … which is joy to the ears of any rental company owner!

Miguel has been involved in the entertainment industry since he was a child. His first ‘professional’ activity was as a DJ. He has always loved music which led to a keen interest in production and presentation, and from that he decided to focus his career on developing a premium technical production operation.