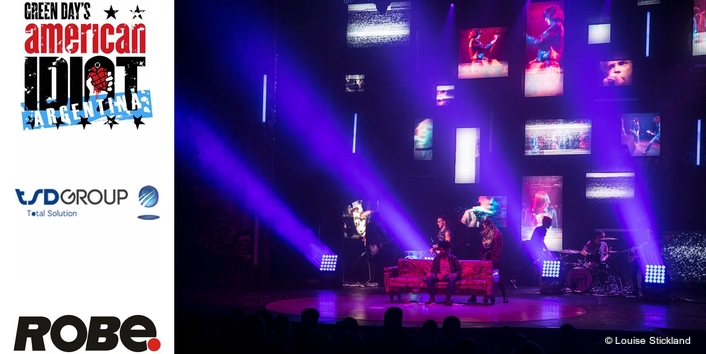 A top Argentinian creative team including director, set and lighting designer Ariel del Mastro, award-winning lighting director Ariel “el gato” Ponce and video designer Maxi Vecco have created a stunning production design for Green Day’s rock opera “American Idiot”, currently playing at the Broadway Theatre in Buenos Aires. It is the first time that the show has been sung in Spanish, and in fact the first time it has been produced in any language other than English!

Robe moving lights are central to creating the raw, edgy vibe … with Spiiders, Spikies and Squares prominent on the rig, and being used to the maximum by the two Ariels in their creation of a colourful, dramatic, contrasty fast-paced lighting aesthetic to complement the punky rock sounds and gritty narrative.

Both Ariels were instrumental in specifying the Robes on the rig after previous good experiences with all these fixtures. 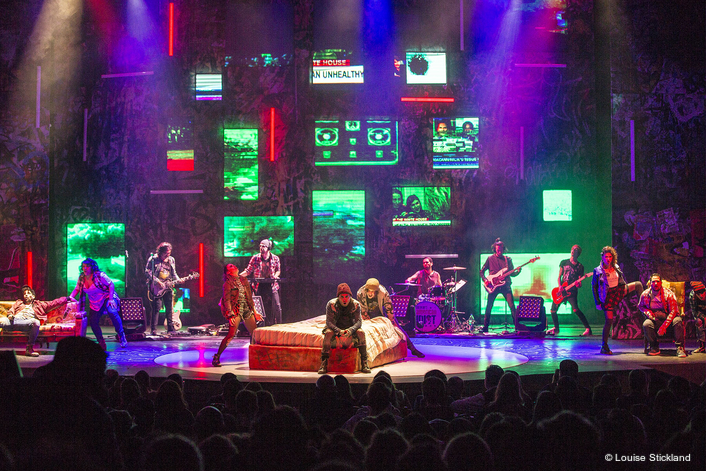 These Robe products were chosen for the flexibility and creative scope they bring to lighting three very different and dynamic shows. Having Robe on-board - along with a selection of other moving lights and generics - made the imaginative challenges they faced infinitely easier.

While the three shows utilize the same rig, they all look completely different. Some of the Robe fixtures are re-positioned and re-rigged in between, and Mahatma also utilises some additional Robe Pointes. 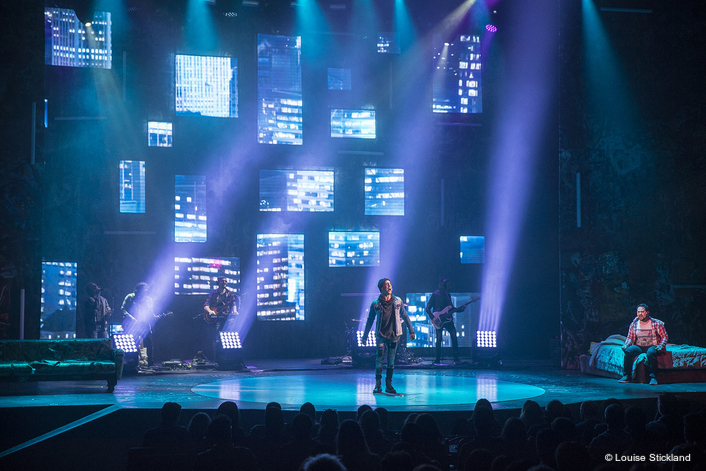 American Idiot – the stage adaptation of Green Day's 2004 critically acclaimed and commercially successful album - was inspired by many things including the ground-breaking work of The Who and their original 'rock opera' "Tommy". It was set against a backdrop of the 2003 Iraq War and, the Bush era in U.S. politics and corporate imperialism routinely choking individual enterprise and spirit. Its striking red heart-shaped hand grenade has become an iconic symbol.

Hard-hitting, energetic music and lyrics with attitude, cynical yet positive and an in-the-face call to action to all those fighting for a bit of identity … the lighting and visuals needed to match this vibe.

Ariel del Mastro – a larger than life character who thinks big all of the time - first saw the show on Broadway around 10 years ago and, captivated, dreamed about bringing it to Argentina.

It took some time for the circumstances to be right, he persevered, purchased the rights and looked for a producer … and this is the result.

The decision to perform in Spanish gave it much wider appeal to the local audience and was crucial to understanding the nuances of the narrative … a smart move as the crowds have been flocking to the theatre to catch the action for the four month run. 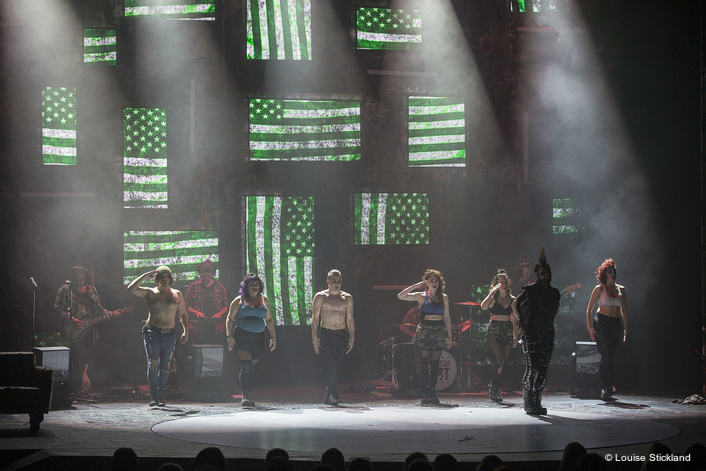 Ariel (del Mastro) also designed sets for the triumvirate of productions mentioned above and came up with the ingenious idea of masking the extensive video elements installed for Mahatma … to produce the fragmented back wall look that defines the American Idiot performance space.

“Effectively it’s more like a rock concert with a storyline than conventional theatre production,” explained Ariel “and so that’s how we approached and lit it”.

Ariel, based in Buenos Aires and working internationally, has quite recently started using Robe, and has specified the brand for 90% of his work over the last 18 months. “Basically because I think they make absolutely great lights!” he declared.

At the theatre – on the frenetic Avenida Corrientes, a main Buenos Aires artery along which a clutch of theatres are located, Ariel Ponce operates the show each night. The nickname “El Gato” - The Cat – comes from apparently being blessed with nine lives – he reckons he’s  currently on number seven!

Fresh from winning a coveted 2017 Hugo Award – honouring the creative and technical talents of those working in musical theatre - for his fresh and inventive lighting design work, El Gato chats about how the fixtures are positioned and used on American Idiot.

The 32 x Spiiders are all on overhead trusses installed in the theatre roof and are used for all the stage washes and colouring – of which there is plenty in the show. 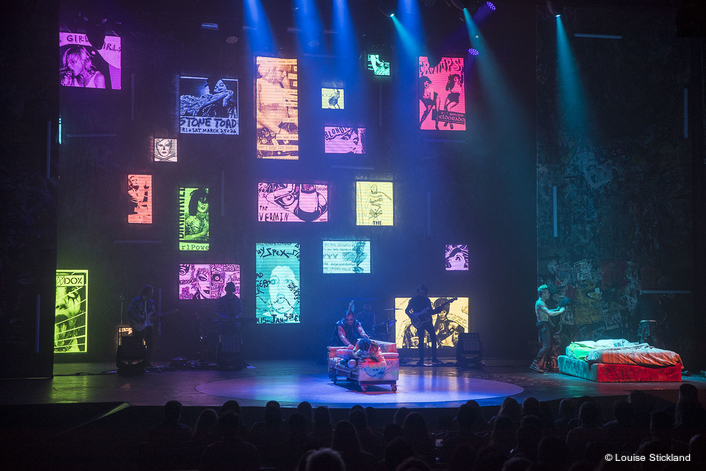 El Gato also uses the Spiider’s flower effect which he thinks is “Magnificent”! He’d first used this new wash-beam collaborating with Ariel del Mastro on the launch of the “Mahatma” show earlier in the year at the Luxor Theatre in Villa Carlos Paz, Cordoba.

They also like the amber colours and the realistic range of whites that they can get from the Spiiders … these have a quality and richness unimaginable from an LED source just a few years ago.

The Spikies are dotted all around the video screens upstage where their small size and light weight and the high speed continuous pan and tilt made them ideal for the position and the tasks being asked. 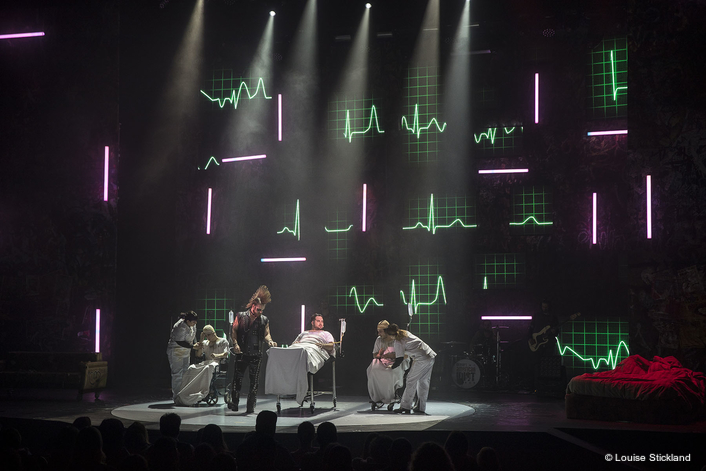 Twelve of the 16 Squares were used upstage of the back wall, blasting through the 6mm video screens, with four on the floor – brought on and off and positioned manually for certain scenes - for more in-the-face effects.

Again, the first time the two Ariels used this 5x5 matrix style luminaire from Robe was Mahatma in Cordoba. They loved it for the myriad of different effects and the mapping capabilities which create numerous different shapes in American Idiot like crucifixes, X’s, square / circular borders etc.

These are the first mainstream shows in Argentina to use these type of effects and the idea is still experimental and the source of many WOWs! 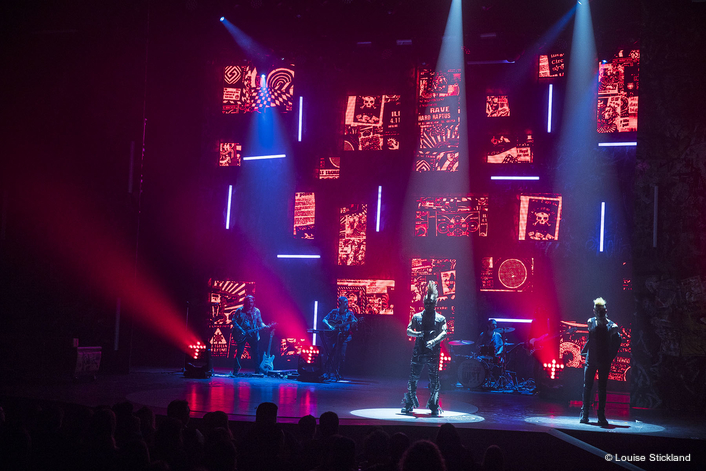 El Gato enjoyed the many challenges that they have encountered in lighting American Idiot.

The programming was an intense process. The video content was finalised later on in the pre-production process, so they had to start programing - there are over 230 multi-part cues in the grandMA2 - without having the material to refer to ... and then tweak once the video was all stored and programmed in the media server!

El Gato has been using Robe for around 6 years through different rental companies and also on his own lighting design clients. 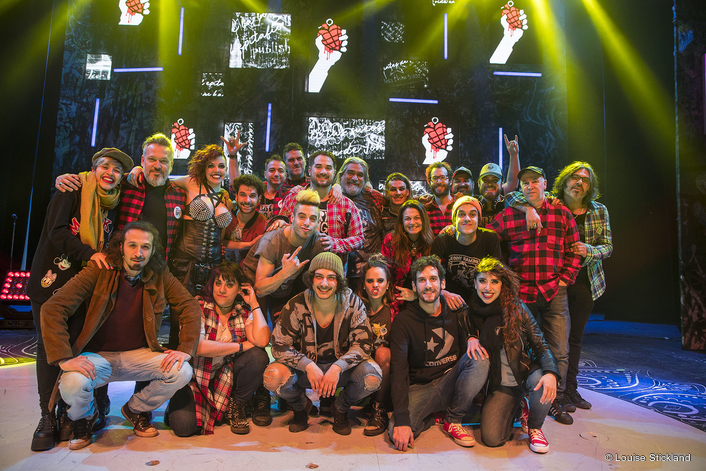 CDM Productions are supplying all the lighting for American Idiot, Mahatma and Taboo having made a large Robe investment earlier in the year which was delivered by Argentinean distributor, TSD Group.