Stage Tec Audio and Mixing over IP at ISE2017 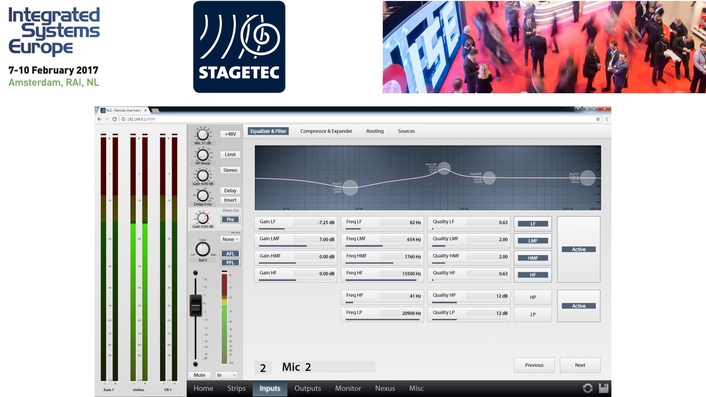 Stage Tec, the Berlin-based developer and manufacturer of digital audio equipment, is presenting an IP-based console at the ISE which performs extensive control tasks – the ON AIR flex. ON AIR flex is freely configurable and adapts easily to suit individual requirements. The system consists of three components – audio processing, control elements and control logic. They are separated from each other and communicate via the standardised IP protocol EmBER+. By separating the control component, the mixing console logic becomes freely configurable and available to all. It is possible to define the entire mixing console configuration and to adapt ON AIR flex to any workflow.

ON AIR flex is fully integrated into Stage Tec's powerful NEXUS routing system and can monitor and control the network directly. NEXUS is a decentralised, versatile routing network that switches and transmits audio and non-audio signals.

A special feature of ON AIR flex is its cross-platform user interface: the GUI builds on web technologies such as JavaScript and Webkit. This enables access to the console's control logic not only via dedicated hardware panels, but from almost any web-enabled user device. Mobile user devices such as tablets become control panels, irrespective of operating system. Stage Tec calls this concept the Remote User Interface (RUI).

The ON AIR flex control logic is implemented with the XACI (NEXUS Advanced Control Interface) control board. XACI is a powerful workhorse – running at 800 MHz, its quad core processor has more than enough reserve capacity to handle even the most demanding control tasks.

All types of control pulses can be integrated into the flexible control intelligence with the logic programming. Combination macros are also possible, such as assigning a button that, when pressed, instructs ON AIR flex to load a pre-defined source routing complete with mixing console channel usage and channel parameters. "The logic programming behind ON AIR flex works is a great advantage," explains René Harder, a member of the board of directors. "With it a very minimalist mixing console can be installed, which is able to control complex sequences and switching in the background via the extensive logic control.

Thanks to its IP infrastructure ON AIR flex can be used as a compact broadcast mixing console in radio applications, or to perform minor monitoring tasks and pre-mixes in OB vans, or to implement any type of control function in a wide range of applications – also from a distance, e.g. from a broadcasting centre.

Installation only requires a few cables, which offers a lot of freedom in distributing the individual elements. The control interface of ON AIR flex is flexible and scalable, extra fader and monitor cassettes can be added.

An independent company based in Berlin, Germany, Stage Tec Entwicklungsgesellschaft für professionelle Audiotechnik GmbH has specialised in developing and manufacturing digital audio equipment. Its flagship products include the digital routers NEXUS and NEXUS STAR as well as the professional mixing consoles AURUS Platinum, CRESCENDO Platinum, AURATUS and ON AIR flex.
Assisted by a business partner, Stage Tec was established in 1993 by 13 engineers (nearly all of whom still work there). The company is headed by Dr. Helmut Jahne, who was one of the founding members of the Stage Tec team and who continues to drive the technological supremacy of the product lines.
A leading pioneer in the transition from analogue to digital audio technology, Stage Tec has an international reputation and raised the bar in digital audio technology with a continuous stream of developments and innovations. Today, Stage Tec offers a comprehensive range of products ranging from the smallest to the largest of mixing consoles.