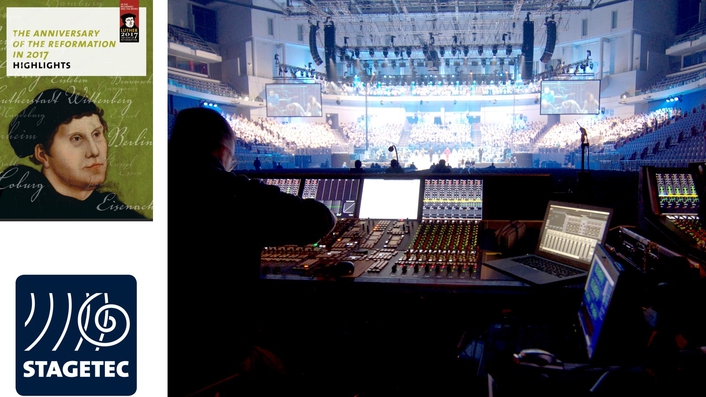 Carsten Kümmel, the project's leading sound engineer, at the Stage Tec AURUS platinum during the show in Hannover

In the year celebrating the 500th anniversary of the Reformation, a spectacular show is touring Germany: a 40 piece symphony orchestra, a rock band and 12 musical actors are coming together with choirs of up to 3000 singers in 11 cities to perform the 'Pop-Oratorio Luther' production. Countless components from Stage Tec ensure outstanding audio for these live events, forming a large audio network with three embedded mixing consoles.

The ‘Pop-Oratorio Luther – Project of a Thousand Voices’ is presented by the Creative Church Foundation. Dieter Falk is the composer and producer, and Michael Kunze is the librettist. The storyline centres on Martin Luther, who in 1521 was called to the Diet of Worms to retract his statements critical of the Church. The Pop-Oratorio tells of Luther's struggle against the authorities and the Church – a captivating tale of politics and religion.

"I'm delighted about the show's realisation and the assistance that Stage Tec is providing. The extraordinarily versatile configuration of the eleven NEXUS Base Devices gives us maximum flexibility to adapt spontaneously to the specific circumstances of each arena," says Carsten Kümmel, the project's leading sound engineer. "Furthermore the NEXUS system combined with the AURUS consoles also provides the utmost freedom and options during the operation and interaction of the four mixing desks, which was simply not possible with the previous products."

The Oratorio is mixed by a 32 fader AURUS platinum at the FOH position. The second AURUS platinum with 16 faders, also located FOH, mixes the soloists. A NEXUS STAR, generously equipped with seven platinum DSP boards, supplies the processing for both consoles. An AURATUS with 16 faders is responsible for choir monitoring. The fourth mixing position features an SD7, supplemented by a second NEXUS STAR router. These four consoles are embedded in a large audio network with 11 NEXUS Base Devices, which provide 1500 into 1500 audio I/O. Five NEXUS Base Devices provide TrueMatch mic inputs for the large choir. Thanks to the quad split function, each mixing console can make its own preamplification adjustments at the mic without affecting the others. "The challenge this project poses is the limited rehearsals, because there's a new choir performing in each city", explains Alex Nemes, Head of Sales at Stage Tec. "This makes it almost impossible to use scene automation. Most mixing has to be done live." 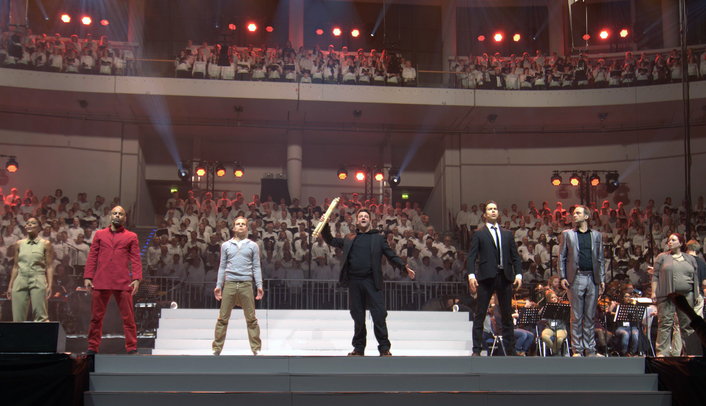 Musical actors during the Pop-Oratorio Luther in Hannover

Supporters of the project include the theologian and cleric Margot Käßmann, presenter Eckart von Hirschhausen, chair of the Council of the Evangelical Church in Germany (EKD) Heinrich Bedford-Strohm, and Olaf Scholz, the Mayor of Hamburg. The first performance took place in Hanover on 14th January, and the grand finale will be in Berlin on 31st October, recorded by ZDF.

Continued expansion at Stage Tec
Over 100,000 channels of Stage Tec TrueMatch® converters are now in use
18 Stage Tec mixing consoles for RAI