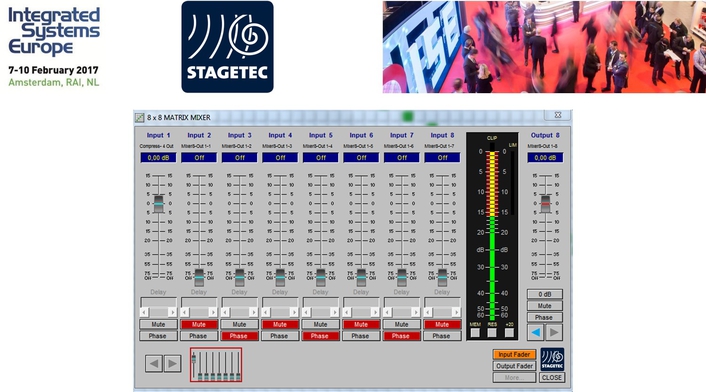 Stage Tec, the Berlin-based developer and manufacturer of digital audio equipment, is presenting its versatile routing system NEXUS at the ISE for the first time. NEXUS distributes and converts audio and non-audio signals. The routing system is consistently decentralised. Networking is via duplex fibre-optic cables with variable SFP+ transceivers. NEXUS is operated via a graphical user interface, control by external systems is also possible thanks to open control protocols.

The routing system is based on decentralised, networked Base Devices which are populated with I/O boards corresponding to customer requirements. NEXUS converts and transmits a wide range of formats. All major audio formats, such as DANTE and MADI are supported. NEXUS connects to external control systems seamlessly utilising powerful protocols such as EmBER+ and SNMP, as well as MIDI and GPIO.

NEXUS offers outstanding AD/DA converter technology: The TrueMatch® microphone converter achieves up to 32-bit internal resolution and a dynamic range of 158 dB(A), unrivalled in the world. TrueMatch® technology dispenses with microphone preamplifiers once and for all.
In addition to transmitting and processing high quality audio signals, NEXUS can also be used to transmit non-audio signals transparently, ranging from basic serial data streams to broadband Ethernet streams. In combination with with the, powerful, integrated logic-based macro controls, NEXUS can handle virtually any external control task such as lighting controls. Other third-party devices such as amplifiers and machines can also be controlled.

Fibre-optic connections, central control boards, power supplies and certain digital audio formats can be configured for redundancy.
The concept of distributed intelligence ensures that subsystems operate independently. NEXUS merges the technologies of dynamic TDM and Matrix into a single routing system and caters to all conceivable network topologies and customer requirements.