Over 100,000 channels of Stage Tec TrueMatch® converters are now in use

Stage Tec not only has large-scale equipment such as audio mixing consoles and routing systems in its portfolio, it also offers a technology that is celebrating a spectacular milestone. The patented TrueMatch® technology is now in use as an analogue frontend in the NEXUS audio routing system in more than 100,000 channels worldwide. It is a high-end A/D converter that, for the first time ever, eliminates the need for analogue microphone preamplifiers with all their well-known shortcomings due to its outstanding dynamic range of 158 dB (A).

TrueMatch® technology makes it possible to increase the dynamic range of conventional A/D converters. Outstanding analogue circuit design and modern DSP technology combine to form the basis for a reference converter that is characterized by minimal converter errors, very low harmonic distortion, homogeneous noise spectra and substantially improved aliasing suppression. The microphone converter achieves a resolution of up to 32-bits and a dynamic range of 158 dB (A) at sampling frequencies up to 96 kHz. It guarantees precise sound reproduction.

The patented TrueMatch® converter technology has a lower digital noise floor than the thermal self-noise typical of any microphone. For the first time ever it is solely the microphone which determines the acoustic characteristics and not the converter or an analogue microphone preamplifier. TrueMatch® is therefore considered by experts to be one of the finest converters in the world.

The TrueMatch® converter is available in two versions. As an analogue front end in the NEXUS audio routing system, the Stage Tec A/D converters (XAD+, XAD) and the microphone board (XMIC+, XMAD) are equipped with TrueMatch® converters.
The second version is the self-sufficient RMC (Reference Microphone Converter). Microphones are connected directly to the RMC. It is no longer necessary to use conventional, analogue microphone amps with downstream A/D converters. 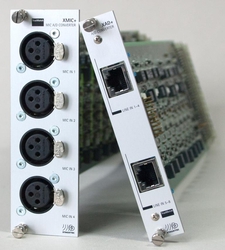 Stage Tec received the coveted Emmy® Award for its NEXUS system in 2010, in part due to the pioneering TrueMatch® technology. The award committee emphasized the natural and faithful signal conversion from analogue into the digital domain. The Emmy® Award is the most prestigious TV award in the USA and recognizes innovative developments that have a lasting impact on television broadcasting, recording or reproduction.