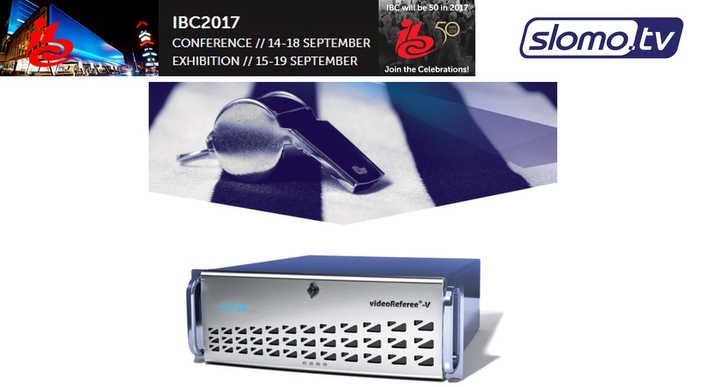 Revolutionary new system gives referee and TV audience access to all the action, all the time!

On its booth (8.B40) at IBC 2017,  slomo.tv, a leading international supplier of cost-effective, high performance server-based video recording and replay systems, will introduce the ninth generation of its videoReferee® system. Designated videoReferee® VG, the system supports up to 24 discrete 3G SDI video channels and supports 3G/HD/720p signals in any combination.

The system records up to 24 camera channels. The referees can analyze in-play incidents frame by frame simultaneously from several cameras and if necessary, the video image can be magnified (zoomed in). The slow motion playback is of sufficient quality that besides being used by the judges, it can be included in television broadcasts, explaining the referee’s decisions during a game.

In addition, videoReferee VG provides an extra multi-viewer output for the referee's assistant. It supports the vR-Keypad, which enables the assistant to easily mark and label in-play incidents for subsequent or immediate search. The new system supports timing of 1/10 second increments from scoreboard computer. To achieve this level of precision slomo.tv has worked closely with more than 20 scoreboard controller manufacturers.

To comply with the latest Continental Hockey League requirements regarding archiving of recorded material, slomo.tv has developed batch export functionality in H.264 and XDCAM formats, so that the operator can start exporting with the push of just one button.

Ultra fast, intelligent operation
With slomo.tv’s videoReferee systems, events can be marked live or on recorded video and the footage is instantly available for review. When an event is created, the system remembers the active channel, and when returning to this event starts with the same view. Also, broadcasters using slomo.tv replay servers can use marked events to create video highlight packages with controversial moments from the game.

Using the vR-Keypad, the operator or assistant can assign different event tags with a single click. A special search engine enables instant retrieval of tagged events - for example, all goals scored by one team or all off-sides by another.

The standard videoReferee system setup includes two monitors – an engineering interface monitor with built-in multi-viewer of all the channels and a folder of marked events and a separate referee's monitor with a controller for the video judge. The video referee can work with 1, 2, 3 or 4 cameras simultaneously in live or search mode. The view from several cameras simultaneously helps accurate and quick decision making. The system can also magnify any frame for detailed analysis.

Besides the referee's and engineering monitors, videoReferee VG can accommodate a third monitor working as a separate multi-viewer. This is useful when there is a video assistant who can mark events on live video when the referee's monitor is used for analyzing in-play incidents.

In sports events, controversy can be closely related to timing. For example, in ice hockey, a goal scored after time stoppage does not count; in basketball a successful throw 0.1 sec. before the end of the game or attack time is counted. That is why the judges must have access to official game timing data. VideoReferee has two ways of solving this challenge - using a special interface for receiving data directly from the scoreboard computer or selecting the appropriate scoreboard clock view and displaying it as a picture-in- picture (PIP). In both cases, information is recorded in each video channel of the system. For the unlikely situation when none of the 24 channels contain a scoreboard image there is an option - dedicated to scoreboard camera input device, which supports SDI and HDMI cameras. videoReferee makes it possible to use 720p, 1080i and 1080p cameras in the same project.

TV audience sees what the ref sees!
In sports broadcasts today, TV viewers are eager to follow the referee’s decision making process. If this is not prohibited by the league regulations, the referee's monitor image can be provided to broadcasters via optional SDI output module.

Also, many sports federations require a video report in the form of H.264 or MPEG files. In addition to marked moments, the system can batch export all video channels with the use of single button, which significantly reduces the time spent export.

About Slomo.tv
Over the last decade, the company has successfully introduced complete lines of high quality multi-channel professional video recording products. Slomo.tv has brought to market a number of effective solutions for tapeless video production technology. Its products became de facto industry standard in Eastern Europe and the Baltic region. Slomo.tv systems, such as Dominator and Simple R, are widely used on major TV channels, and the company’s sports video judging system videoReferee, has become an integral part of many sport arenas worldwide.