Roland has today announced the global launch of the O.H.R.C.A M-5000C Digital Mixing Console. This eagerly anticipated console closely follows the launch of the award winning O.H.R.C.A M-5000 console earlier this year.  Measuring under 30 inches (74 cm) in width and weighing just 70 pounds (32kg), the compact M-5000C offers all the flexibility and power of the M-5000 console but in a smaller footprint - making it the ideal choice for touring, broadcast, theatre and live performance.  The M-5000C will make its debut to the European market at the forthcoming IBC2015 Exhibition (Amsterdam RAI, 11-15 September).

Using the same O.H.R.C.A (Open High Resolution Configurable Architecture) platform that has made the M-5000 so popular with engineers, the M-5000C brings a new dimension of user configurability to consoles of this size at an affordable price-point. The O.H.R.C.A. platform delivers 128 freely definable audio paths, expandable protocols and multi-format I/O choices combined with a flexible user interface and workflow - all at a pristine 24-bit / 96kHz sound quality. This open audio architecture supports Dante, MADI, Waves Sound Grid, and REAC audio protocols, as well as audio delivery over video using SDI, DVI and SFP cabling.

Along with a 96kHz sampling rate for superb sound quality, M-5000C has a 72-bit summing bus, newly designed, discrete analog circuitry and redundant power supply. In addition to 16 inputs and 8 outputs on the console, the M-5000C also features two expansion interface slots that can accommodate REAC, Dante, MADI, Waves SoundGrid and other XI-Series expansion cards.

An intuitive and flexible workflow is key to the design of the M-5000C with an abundance of user-centric features such as the 12” colour touchscreen that is controllable by multipurpose knobs below the screen.  Sixteen (of a total of twenty) faders are divided into two banks of eight that can work together or isolated, each can be assigned with a total of four different workflows; Scroll, Spill DCA, Anchors and User Assignable Layers.  The remaining four faders can be freely assigned by the user depending on their requirements.  Also free to be assigned by the user are three banks each with four knobs and eight buttons (total twelve knobs and twenty four buttons) ensuring the M-5000C truly meets the demands for compliancy that professionals now expect. 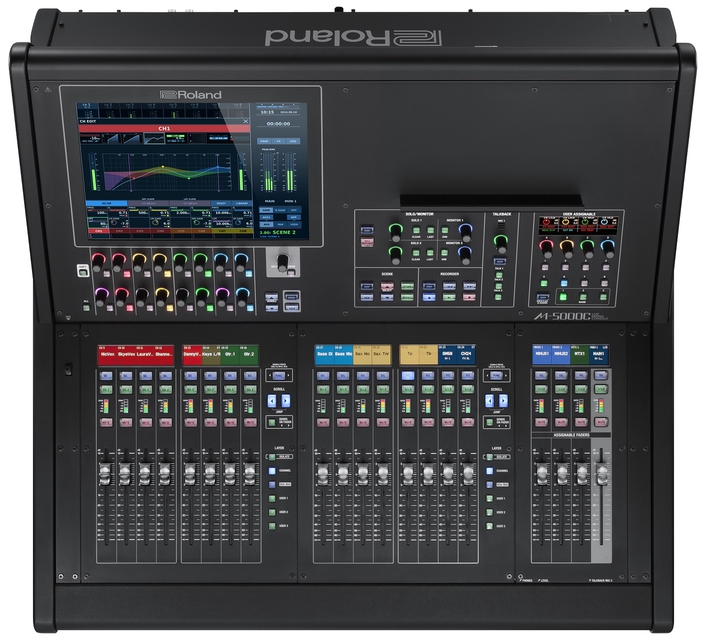 Naturally, the extensive family of existing Roland products integrates seamlessly with the new platform – knitting the M-5000C into thousands of systems already running worldwide. Scores of digital snake options already exist for I/O, but the Roland M-48 Personal Mixer offers a particularly powerful solution. Hybrid monitoring takes the lead performers’ mixes off the console busses in the traditional way, while the rest of the musicians use M-48 Personal Mixers. Connecting M-48 and M-5000C via the powered REAC port on the console, the engineer can seamlessly mix between those artists on aux busses and those musicians on personal mixers. Finally, the R-1000 48-channel Player/Recorder completes the family of devices fully integral with the M-5000C.

The M-5000C is the latest addition to the growing line-up of O.H.R.C.A. based consoles that include the 28 fader M-5000, winner of the ‘Best Mixing System (Live)’ award at the pipa/Prolight & Sound International Press Awards.