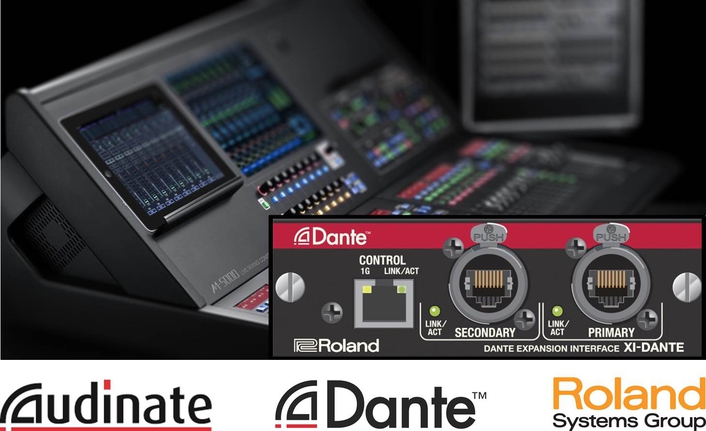 Roland is a premier pro audio and video manufacturer and is most notable in the audio market for their live digital mixing consoles, digital snake systems, multi-channel recording/playback systems, and personal mixing solution – all over Cat5e/6 Ethernet network.

Roland’s offering of a Dante solution addresses the need from system integrators, consultants and pro audio professionals wanting to interconnect digital audio products. Supporting Dante in addition to REAC, MADI and Waves SoundGrid positions the new Roland M-5000 Live Mixing Console and the O.H.R.C.A platform as one of the most openly networked audio consoles on the market.

“We are excited to be working together with Audinate in offering Dante connectivity to our users,” explains Roland Corporation U.S vice president, John Broadhead. “The Roland Pro Audio lineup is one of the most comprehensively integrated audio solutions available and with the ability to now integrate with Dante networks, it delivers an enormous amount of power and flexibility to our clients.”

The Roland M-5000 Live Mixing Console sits on a new platform called O.H.R.CA. This represents “Open”, “High Resolution”, and “Configurable Architecture” by delivering definable audio paths, supporting multiple audio format protocols, plus pristine 96 kHz sound quality throughout the system. The M-5000’s internal mix architecture is not fixed and can be freely defined for mixing channels, AUXs, Matrices, subgroup buses, MIX-MINUS buses within a range of up to 128 audio paths allowing the user to create a console structure to suit the needs of the application.

“We have been working closely with Roland for some time now, and the culmination of the new Roland M-5000 Live Mixing Console with Dante networking will be extremely well received in the market” stated Lee Ellison, CEO of Audinate. “Dante offers the most extensive portfolio of networked products in the pro audio market and we are thrilled to welcome Roland into the Dante family.”

The Roland M-5000 along with the Dante Expansion card will be available early 2015.

About Audinate
Audinate revolutionizes AV systems to enable our customers to thrive in a networked world. Audinate’s Dante media networking technology has been adopted by the leading OEM manufacturers and has become the standard and dominant networking technology in the professional audio/visual industry.
Dante is used extensively for live performance events, commercial installation, broadcast, recording and production, and communications systems. Audinate offices are located in US, United Kingdom and Australia.