Colour Sound for Above & Beyond Acoustic

Lighting and visuals for the tour are designed by Neil Marsh, while equipment and crew for these and a warm up in Utrecht, were delivered by Colour Sound Experiment.

Colour Sound also took the opportunity to invest in more high powered Barco 30K projectors to service these shows, and having also just purchased some for another tour, are now well equipped to deliver the most demanding large format projection projects.

The company’s association with Neil and Above & Beyond goes back some years and H (Haydn Cruickshank) comments, “Above & Beyond are known for producing amazing trance music, however reworking these well-known dancefloor anthems takes the dynamics of their work to completely new levels. We were very proud to be involved”. 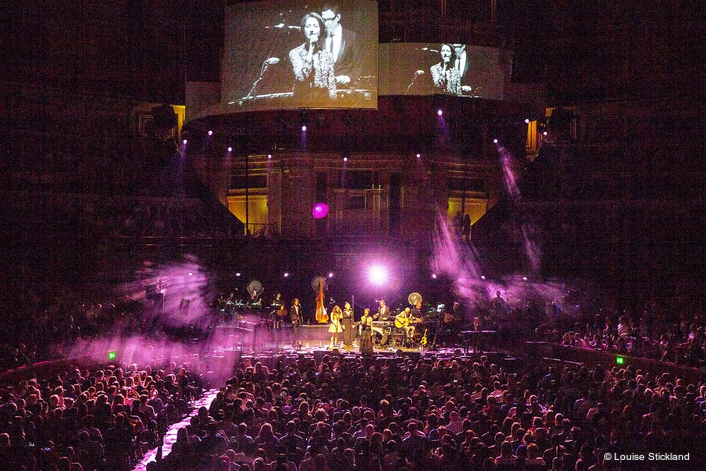 Performing some of their favourite compilations in a new acoustic / orchestral environment pushed boundaries for the band and propelled Neil into a completely different head-space in terms of design. Added to that was the challenge of both Albert Hall venues being unique, all of which needed to reflect in his visual scheme.

At the RAH, tickets were so in demand that the show was sold 270 degrees, which dictated the site-lines and set the top truss trim heights very high. The design contained two semi-circular projection surfaces hung on two fractional segments of 10 metre circular trusses (a half and a three-eighth curved section respectively).

These also featured different height hangs of double-layered deco linen with a burgundy red Voile CS from Showtex on the reverse side. Neil wanted a rough surface, and the idea was to have ephemeral diorama-style video images flickering away creating atmosphere… rather than it being a virtual IMAG of the performance. 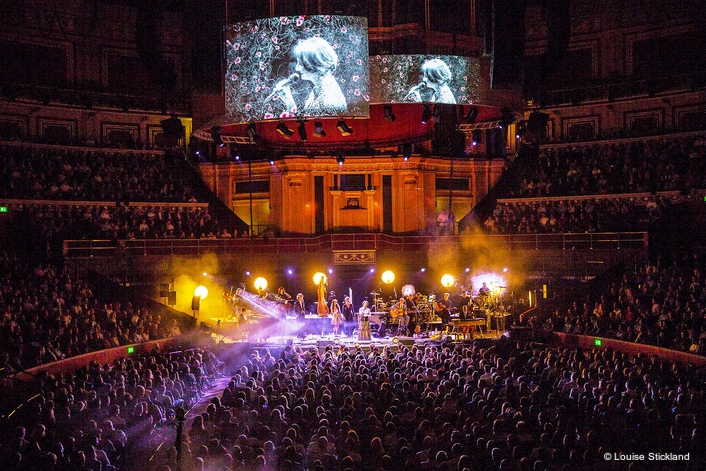 The two Barco 30K projectors were rigged on the gallery level of the RAH auditorium approximately 70 metres away, and the desired effect was replicated extremely well.

Six HD mini-cams were dotted around the stage and their inputs fed directly into the AI server also running and treating the playback video sources created for the show by Dylan Byrne.

The AI received timecode from a JoeCo playback machine operated by ‘Bid’ Sebastian Beresford, the percussion section of the band (of Leftfield and Rodriguez fame!) It carries the extra string / horn parts and a timecode channel that is sent down the audio multi returns to FOH, triggering specific effects and cameras to run for certain parts of the music – like horns or strings. It was a neat one-box-over-Ethernet solution for video control in this instance. 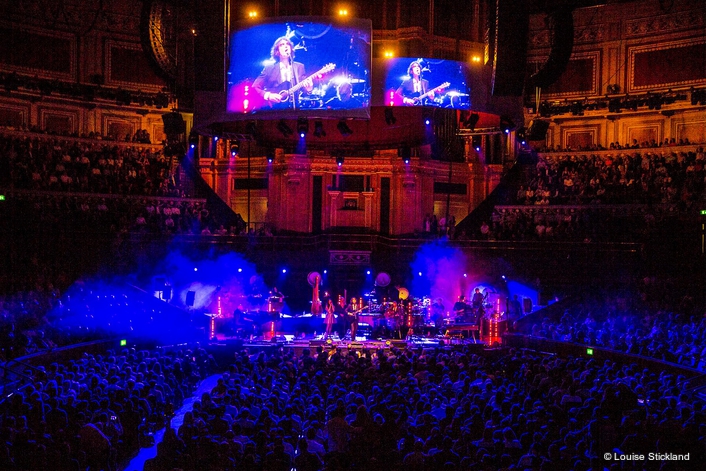 When it came to lighting, Neil needed to match the vibe and mood of the video visuals and he also wanted a thread of continuity from the previous four Acoustic shows that were played in 2014. This came in the form of eight 2K Skypans on stands, positioned onstage in close proximity to the band, bringing a nice touch of retro.

In the air above were three curved trusses maintaining the arc theme, with 22 x Robe BMFL Spots as the main profile luminaires, chosen for their brightness and power with the high trim … even when zoomed out wide or heavily effected with gobos and in darker colours.

They had some custom gobos made and fitted – inspired by David Lynch’s Red Room from Twin Peaks – which were used prominently for the song “Black Room Boy” featuring band member Tony McGuinness singing. He’s a big fan of the cult TV series! A single 4K Mole Beam positioned upstage right highlighted him during this moody and esoteric song. 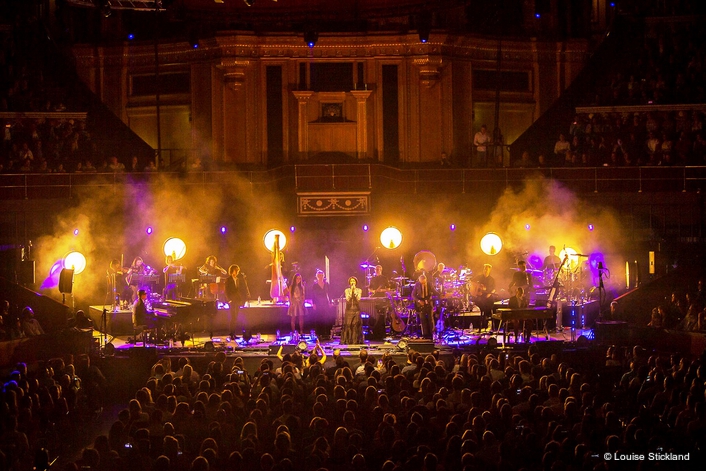 Neil worked in a row of 12 Sunstrips along the front of the stage which made ideal footlights in the limited available space.

Sixteen Martin Sceptron LED battens were vertically K-clamped to mic stands and positioned wherever they would fit in amongst the band and musicians. Lightweight and slim, they were ideal for this setting, and were run as DMX fixtures rather than video surfaces for additional flexibility … although hungry on channels!

The lighting was completed with some ETC Source Four PARs dotted around for general band illumination, and an arc of blinders on the back lip of the stage mimicking the curvature of the Skypans.

“I wanted it to look organic rather than too ‘techie’ and a complete contrast to the electronic show,” explained Neil. 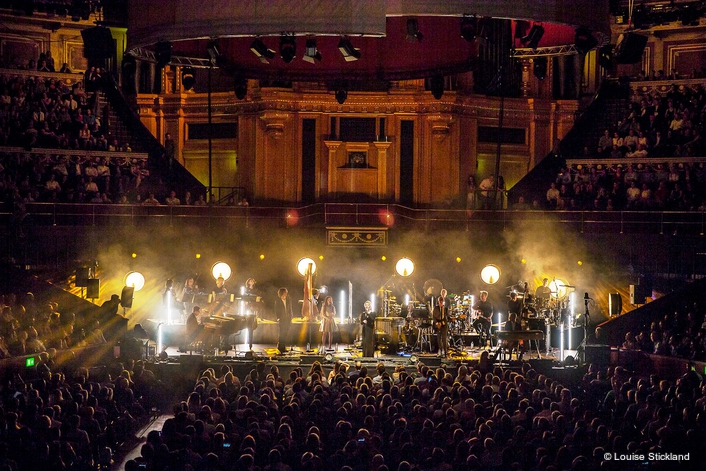 Neil programmed and ran the show on a ChamSys MQ300 console with an MQ200 running as a spare, and was assisted by Dave Kyle who co-ordinated all the video elements making all the FOH operations run super-smoothly.

He was supported by a fabulous Colour Sound crew, chiefed by Simon Robertson and John ‘Afghan’ Lahiffe who looked after dimmers, with technicians Alex McCoy and Chris Foot.

For the RAH show, they got in at 7 a.m. and worked non-stop throughout the day to make sure that everything ran smoothly for Neil. For the Albert Hall Manchester, the rig was scaled down to around a third of the size and preceding both of these, the show at Utrecht’s TivoliVredenburg was staged in-the-round, so three different variations of the rig were seen in as many days!

Above & Beyond Acoustic
Colour Sound Experiment