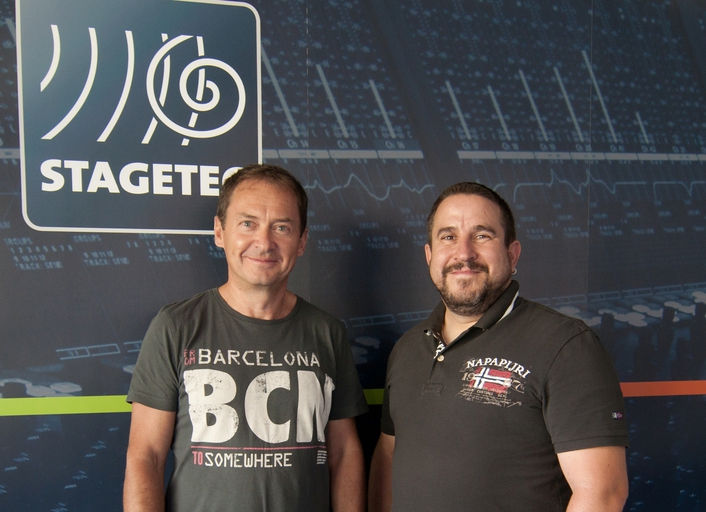 Stage Tec, the Berlin based manufacturer of professional audio mixing consoles and routers, is pleased to announce that Reinhold Friedrich and Michael Müller have joined its sales force since 1 September. The new additions are part of an effort to work more closely with theatre customers and enhance sales. Reinhold Friedrich and Michael Müller will primarily act as contacts for theatres throughout Germany, Austria and Switzerland. “Reinhold and Michael are well versed in working on projects with customers, planners and systems houses, and complement our sales team very well. Their professionalism and expertise will prove valuable as we intensify our sales activities” commented sales manager Alexander Nemes.

Reinhold Friederich is a trained electrical and electronics installation engineer. He studied to become an electrical engineer at the DAG Technikum College in Würzburg, majoring in data processing technology. He then gained several years’ experience in integrating and overseeing building management systems at Robert Bosch GmbH, then worked in sales for Visolex in Berlin and later in product management for Wieland Electric GmbH in Bamberg. Since 1998, Reinhold Friedrich has been working for Salzbrenner media, focussing on product and project management. Mr Friederich’s projects have included the refurbishment of the stage management and PA systems at the Sydney Opera House and the Darmstadt Staatstheater. He was also responsible for modernising the PA and evacuation system at the Mercedes Benz Arena in Stuttgart.

Additionally, he oversaw the project integration and systems configuration of stage management and PA systems at the Staatstheater Wiesbaden, Muziektheater Amsterdam and the Den Norske Opera in Oslo. ‘I have always enjoyed working closely with customers. I’m delighted at the opportunity to develop new markets and realise fascinating projects with Stage Tec’, says Reinhold Friedrich.

Michael Müller is a trained electrical engineer and graduated from the Erlangen Technical College as a certified electrical engineer, also majoring in data processing technology. Since joining Salzbrenner media in Buttenheim in 1995, he worked mostly worked in plant engineering and after graduating was employed as a project manager. Michael Müller can look back on more than 20 years’ experience in the industry. Projects he has managed include the Linz Music Theatre, the Munich Kammerspiele Theatre, the Bonn Opera House and the Bolshoi Theatre in Moscow.

For the past two years, Michael Müller has worked in Sales Support for Communications Equipment and Project Management. Here he has provided technical support in the sale of communications and media equipment for event venues and advised end users and design offices on new projects. He also devised system concepts for budgeting and execution planning. ‘I am convinced that my project experience will benefit the sales team and enable us to provide an even more comprehensive service to theatres. I am looking forward to my new responsibilities at Stage Tec and to working with my colleagues in Berlin’, concludes Michael Müller.