L-Acoustics Soars with the Arizona Cardinals 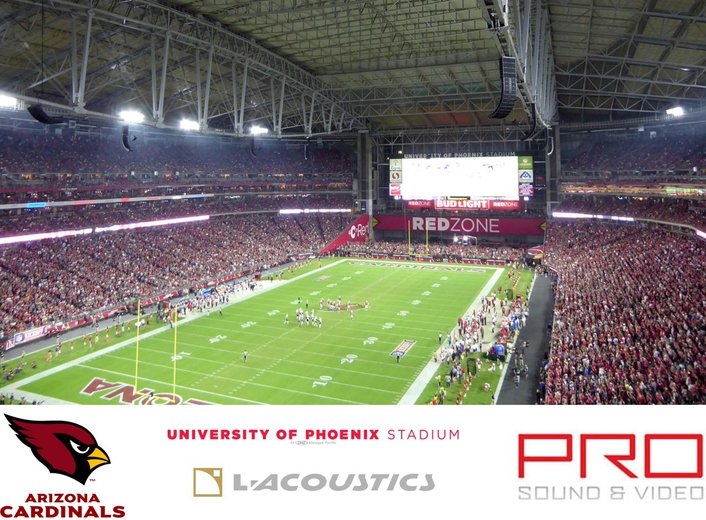 The design of University of Phoenix Stadium, home of the NFL’s Arizona Cardinals, is singular in an already innovative universe of sports venues. Opened in August of 2006 with a retractable roof and the nation’s first fully-retractable natural grass-playing surface, the facility’s entire playing field is able to roll outside of the building via an opening on one side of the stadium.

In keeping with the organization’s long-standing commitment to elevating the fan experience, the Arizona Cardinals unveiled a new sound system in University of Phoenix Stadium for the start of the 2016 NFL season. Designed and specified by the Arizona Cardinals, the system consists primarily of flown L-Acoustics K2 arrays permanently installed in July by AV systems integrator Pro Sound & Video.

“We are committed to providing a world-class stadium atmosphere in every possible way,” said Cardinals President Michael Bidwill. “Because the audio-visual experience is a huge part of that, we understood how significant an initiative and investment this was for our team. The upgrade has not only been incredibly well-received by our fans but also keeps University of Phoenix Stadium at the forefront in a very competitive landscape of sports and entertainment venues.”

University of Phoenix Stadium is also unique in another way: nearly all of its AV requirements can be met by its own in-house AV/IT systems staff. And who better to understand the nuances of a major venue like an NFL stadium than those who work inside it every day?

Over the past 10 years, the music playback needs of the stadium had also expanded, requiring better low- and high-end reproduction, according to Jamie Gillespie, systems audio engineer for the Arizona Cardinals. At the same time, both the stadium and the Cardinals are always looking ahead, needing a lighter system to take into account the venue’s structural ratings for their massive truss system, which will be used for a center video cluster for NCAA Final Four games scheduled for 2017. 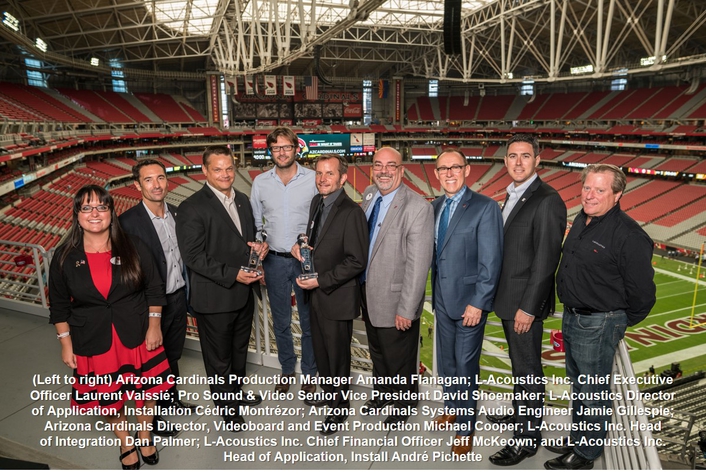 L-Acoustics’ K2 was the solution to all of these issues. “The K2 box weighs only 123 pounds, but it’s in the same class and has the power and throw of boxes that weigh twice as much,” he says. In fact, Gillespie adds, the K2’s power and high intelligibility meant that he could dispense with the delay rings that had been necessary in the previous system’s design to ensure sound reached the upper levels of the stadium.

Using L-Acoustics’ Soundvision 3D modeling software, the Cardinals were able to design a simpler yet more powerful system consisting of a total of 10 array hangs: eight arrays comprising 13 K2 enclosures each topped by four K1-SB subwoofers, and two end-zone hangs of nine K2 enclosures each, for a total of 122 K2 and 32 K1-SB. Installed by AV integrator Pro Sound & Video, the system is rounded out with a dozen ARCS Wide enclosures used to fill the upper seats at the north end of the stadium and end zone, and eight X8 coaxial speakers to fill in a “shadow” area for seats used for special events under the main scoreboard. A field fill system, using four hangs of four L-Acoustics Kara enclosures each, is hung behind four of the main arrays and used to cover the playing field for the Cardinals cheerleaders’ presentations and other on-field activities. A total of 81 LA8 amplified controllers power and process the entire system.

“The design approach was to cover from the lower bowl’s front row to the top of the stadium’s back row from a single point without the need for delay speakers, and the K2 arrays perfectly accomplished that,” notes Pro Sound & Video Executive Vice President David Shoemaker, who led the installation project. “The full bandwidth of the K2 enclosures also provided an incredible amount of usable LF, which, combined with the K1-SBs, eliminated the need for ground-based subs. This setup has provided the facility with an unmatched performance in stadium sound.” 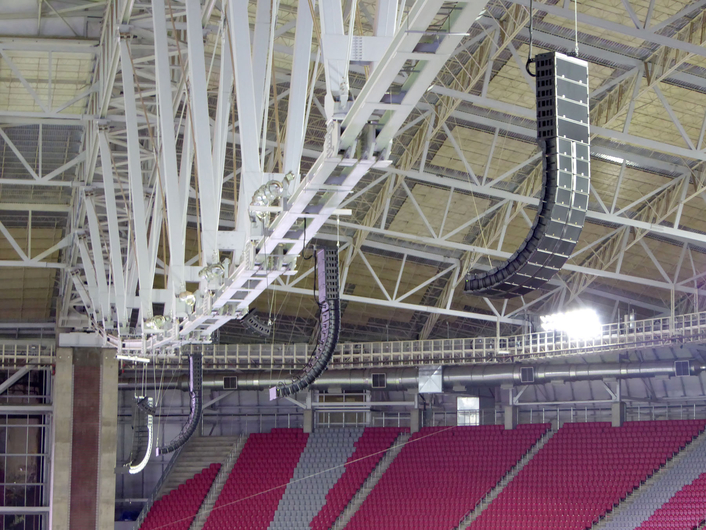 For outside live events, as well as indoor events and conventions, the Arizona Cardinals have an additional two-dozen Kara enclosures on hand, which served as the sound system for an appearance by Blake Shelton at a private event earlier this year.

Despite the fact that this project represented one of the largest fixed installation projects in L-Acoustics’ history, the full system was on-site within four weeks of the official order. “The timeline to perform the installation by the first game was aggressive,” Shoemaker recalls. “Our immediate concern was whether L-Acoustics was able to deliver 122 K2 cabinets with just a few weeks until our deadline, which was the Copa America Games. We were absolutely thrilled when L-Acoustics was able to ship the entire order at once, giving us plenty of time to put in a temporary system for this world-class soccer event as well as ample time to prep the permanent rig for flying.”

With the permanent loudspeaker system in place well in advance of the Cardinals’ preseason opener, Gillespie notes that everyone has been overjoyed with the results. “The Cardinals have always been willing to invest in its AV systems, and this is another example ,” he says. “That’s why University of Phoenix Stadium has hosted such a wide variety of events. And that’s why L-Acoustics was the best choice. It’s all about the fan experience, and the stadium audio system is a huge part of that.”

Shoemaker agrees, “The L-Acoustics K2 system has proved to be a significant upgrade to the stadium. The voicing is exceptional; the coverage is smooth and consistent from row to row, array to array, and all with plenty of headroom. All reports back have been over the top, and we are very pleased to be part of the success that this system has provided.”