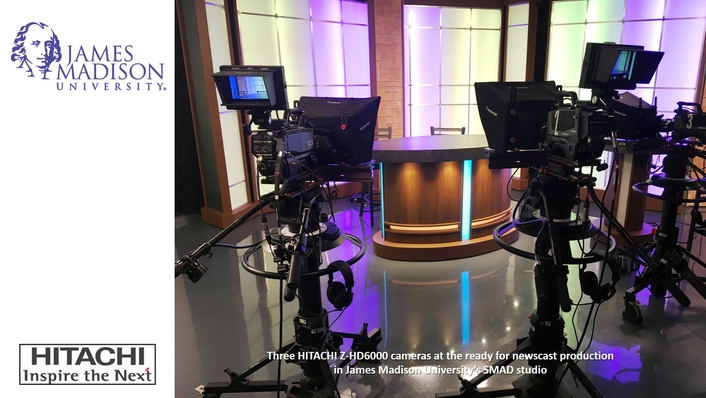 At James Madison University in Harrisonburg, Virginia, the vision of the School of Media Arts and Design (SMAD) includes delivering innovative media education programs that integrate traditional concepts, values, and skills with new and evolving technologies. When the university undertook a major upgrade and refresh of the equipment in its television studio last year, it selected Z‑HD6000 HDTV cameras from Hitachi Kokusai Electric America Ltd. (Hitachi Kokusai) to give students valuable, practical experience while meeting the school’s uncompromising quality, performance and budgetary goals.

Three Z-HD6000s are deployed in the SMAD studio for hands-on instruction in a broad array of multiple-camera production disciplines, from media arts fundamentals to filmmaking and television news. Weekly newscasts produced as part of the university’s Broadcast Journalist curriculum are seen live on its on-campus, HD cable network and online, while select programs from SMAD’s Studio Production class including variety and talk shows are also seen on the school’s closed-circuit channel.

SMAD set out on its studio refresh project for both educational and practical reasons. “We wanted to stay current with technology for instructional purposes, providing students with experience that will benefit them in their subsequent careers,” said John Hodges, technology manager for SMAD at James Madison University. “At the same time, much of our existing equipment was showing its age, and we wanted to avoid the expensive maintenance and parts costs that would have been required to keep it going.”

When choosing products and vendors for the upgrade, the school’s criteria were similarly two-pronged. “We wanted high-quality equipment for the studio, but without spending excessively for an instructional environment,” Hodges explained. “With the HITACHI cameras, we were able to strike the perfect balance, giving our students real-world, hands-on experience on high-quality gear, while fulfilling our duty of stewardship to the taxpayers of the state who ultimately pay for it. Great image quality is most important, but being able to get that in a cost-effective way is a tremendous bonus.”

Supplied by systems integrator Digital Video Group, the cameras are connected to HITACHI CU-HD500 camera control units (CCUs) using the studio’s SMPTE fiber infrastructure. Hodges points to the Z‑HD6000’s uncommonly rich array of built-in features – such as dual-channel communications, and prompter/floor monitor power and video at the camera head – as simplifying wiring while delivering additional benefits. “It’s so nice that we don’t have a bunch of extra cables hanging off the camera that the students could get tangled up in, or even just looking unsightly on the studio floor,” he noted.

Hodges also highlights the cameras’ seven-inch VF-701HDA high-resolution, color viewfinders as a significant upgrade from their previous units, and the ability to transfer setup parameters easily from one camera to another as both efficient and effective. “Our students really enjoy having the menu-driven, color viewfinders, which are great for critical focus and adjustments, and make it easier for them to follow directors’ instructions,” he said. “And we really like that we can set up one camera and copy its settings to the others, so we get an absolutely consistent look across all three cameras.” 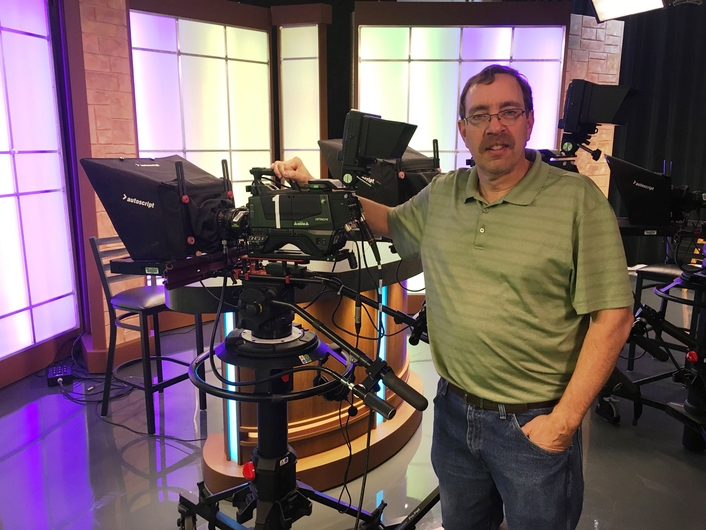 The Z-HD6000s have proven reliable in their first semesters at the university, while delivering the quality and cost-effectiveness that Hodges had sought. “We’re a year in, the cameras haven’t given us a lick of trouble, and they look great,” he concluded. “I think it was a great decision. Bang for the buck is such a cliché, but it’s very true here.”

About James Madison University
James Madison University is a comprehensive public university in Virginia that’s home to more than 21,000 students. Established March 14, 1908, the university offers programs on the bachelor’s, master’s and doctoral levels with its primary emphasis on the undergraduate student. JMU provides a total education to students — one that has a broad range of the liberal arts as its foundation and encompasses an extensive variety of professional and pre-professional programs, augmented by a multitude of learning experiences outside the classroom. The university has been a coeducational institution since 1966 and is located in the heart of the Shenandoah Valley.