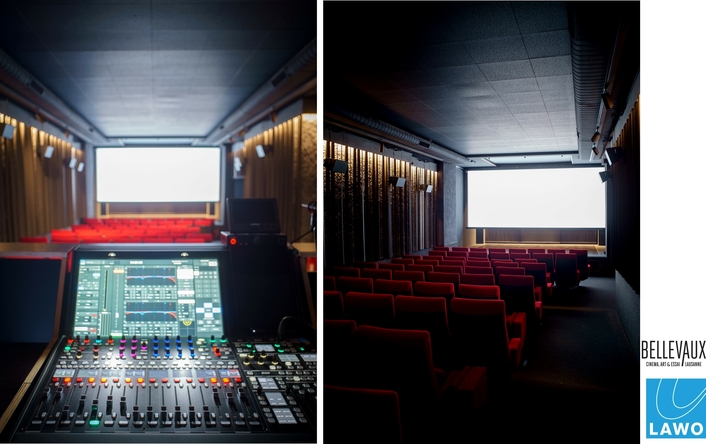 Cinéma Bellevaux, an independent, experimental cinema house in Lausanne, Switzerland, re-opened on 12 October 2021, the first time in a year-and-a-half that lovers of cinema, music and the performing arts could enjoy a live event there. The evening was headlined by the Ensemble Contrechamps, a renowned New Music ensemble based in Geneva; it also marked the debut of Bellevaux’s new Lawo mc²36 mixing console, installed by Lawo’s Swiss systems integrator SLG Broadcast.

“I want to preserve the cinema as a public and social place that delivers a rich experience from the combination of motion pictures, events and the venue itself,” explains Grossfeld. “We mix live music to complement the movies, which I record and replay during subsequent showings of the film. Theater lighting is synchronized to the audio via automation, creating a holistic viewing experience.”

In choosing Lawo to upgrade Cinéma Bellevaux, Grossfeld explains “I knew that I needed a digital audio console that could drive the cinema’s 22-speaker audio system, and also accommodate a lot of audio sources. But I had never used a digital console before; only analog.” References pointed him to Lawo, who provided an mc²36 console for evaluation. What followed was love at first mix: “The Lawo mc²36 is very intuitive to operate,” says Grossfeld. “It was easy for me and a sound engineer friend of mine to dive right into working with the mc².” Also important was the ability to integrate with d&b Soundscape, which can be controlled directly from the Lawo mc²36.

mc²36 is ideal for FOH applications thanks to its small physical footprint and high performance; it has an I/O capacity of 864 channels and accommodates up to 256 audio processing channels, plus native support for ST2110, AES67, RAVENNA, and Ember+.

Grossfeld sees a bright future for his new cinema concept. “Our objective is to transform movies from being on-screen art with musical support into an immersive experience of film, lighting, sounds and music in a unique venue. Lawo and SLG understood our goals and found the right solutions.”

“Ironically,” notes Grossfeld, “we had to postpone our re-opening until October, but not due to sound issues — the delivery of the screen, of all things, was delayed!”

About SLG Broadcast
SLG Broadcast provides systems and products for radio and television broadcasters. As an independent systems integrator, we are the experts for networked radio and TV content production workflows. Our services ensure the successful migration from baseband to IP-based realtime production environments. We are based close to Zürich, Switzerland, with a German subsidiary in Rastatt. SLG is member of the RAVENNA PARTNER COMMUNITY.