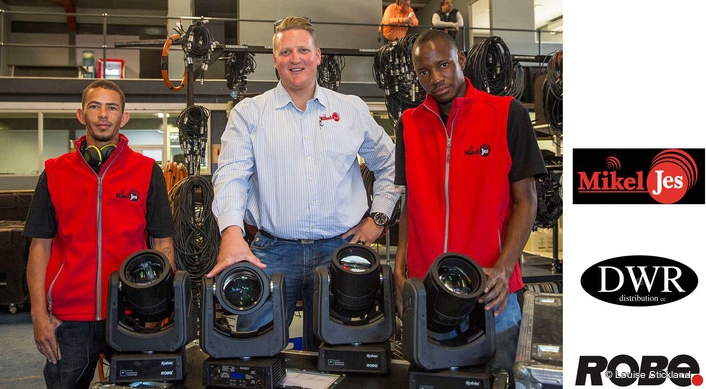 The first Robe Spikies to be purchased on the African continent have gone to Windhoek, Namibia based rental company Mikel-Jes … who purchased 8 units from Robe’s distributor DWR in Johannesburg, South Africa.

The events market in Namibia is currently buoyant, and Robe – thanks to the hard work of DWR and the leading Namibian rental companies’ willingness to invest in premium products - is well established as a moving light brand amongst the top production companies in the country which is most definitely ‘emerging’.

Michael Vermeulen founder and co-owner of Mikel-Jes already has around 80 Robe fixtures in hire stock and has been a steady investor in the brand – along with other quality names in the entertainment technology world – since founding the company in 2008.

When he saw the Spikie in action at Prolight+Sound in Frankfurt this year … he knew it was a perfect fixture for Mikel-Jes’s core business ... which is all sized events delivered to the highest production standards.

“It is really bright” was the first thing that Michael observed about the Spikies “and being a wash and a spot … plus having some high-impact effects was all good for us”. It’s not unusual for their brief in lighting a show to change at short notice, so having the choice of beam or spot mode on one unit “is really helpful and adds huge value to the investment”.

The 8 x Spikies came neatly packaged in one flight case with room for cables in the middle, and at 7.3 Kgs and with very compact dimensions,  they can be squeezed into virtually any place or space on the truss, stage or in the venue.

Consuming just 1 Amp of power … Spikies are great for anywhere where electricity is scarce, erratic, expensive … or any sort of ‘issue’.

In the first two weeks after delivery, the Mikel-Jes Spikes were deployed on 8 shows and lighting designer Berend Apollus comments, “They have made a big difference to how I can light a stage or a space … it is great to have so many choices at my fingertips”.

They were being loaded out of the warehouse during the interview for this story and they will be out on projects constantly for the coming months.

“I can see already that the ROI is going to be good, quick and efficient,” says Michael.

Projects on which the Mikel-Jes team have already used their Spikies include the 50th anniversary of the Safari Court Hotel – the largest in Windhoek – which featured an appearance by popular SA afro-fusion band Freshly Ground; a ‘Trophy Wines’ event for insurance company Old Mutual where they helped turn the room different colours and a Gospel evening at Family Foundation, where the client had seen the Spikies in action on another event … and demanded them for his!

“They are extremely versatile, and the ‘gobo look’ is great if you open the zoom, drop in the prism and then the flower effect”. Michael also likes the unlimited rotation especially when combined with a dimmer chase!

“It’s great to purchase a fixture that is an instant success like this,” concludes Michael.