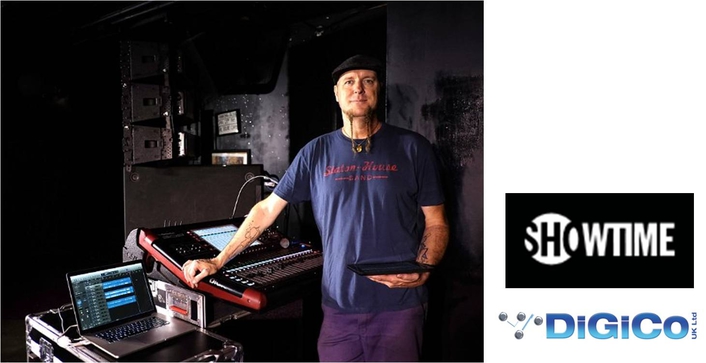 Creator Cameron Crowe’s return to music-themed narrative may not draw kudos from those who do make music move every night, but a very real DiGiCo SD9 console (and a cameo by an SD8) let the equally real music artists feel and sound like they were on stage

In recent years, the necessary legions of equipment movers known as roadies have evolved to become true technical wizards as live music has morphed into ever more sophisticated production events. For better or for worse, though, cinematic representations of them tend to fall short of reality, and that seems to be the consensus of critics and actual roadies of Showtime’s comedy-drama Roadies, which debuted earlier this year. However, the show is getting high marks on its efforts for the authenticity of the environment they work in, and a DiGiCo SD9 console played a major role in that achievement.

Marking a return to music-themed scripts by creator Cameron Crowe, whose 2000 film Almost Famous successfully captured the ebullience of the early days of rock as it became an industry, and produced by the ubiquitous JJ Abrams, Roadies asserts to take viewers backstage on tour to follow the lives and loves of its protagonists as they duck rolling road cases. But the music is quite real, featuring artists including the Head and the Heart, Halsey, Eddie Vedder, Reignwolf, Lindsey Buckingham and others, and they’re playing and singing every note live. Bill Lanham can attest to that. He’s one of the show’s technical consultants whose own role morphed into that of its FOH engineer, monitor mixer and multitrack recording engineer, and he manages all of them on a single console.

“The SD9 is amazing—it can do it all,” says Lanham, whose career began working stage backlines and who grew into live sound over time. “I’ve used a lot of consoles and I can tell you that DiGiCo is the one that lets you decide how you want to work.”

Lanham manages what has turned into a complex role on the show by bringing the stage microphones into two stage boxes, totaling 40 channels, and then splitting from those, sending copper to the production audio recordist and taking a MADI feed from the stage to a DiGiGrid MGB interface in the DiGiRack and console. From there it goes over Ethernet to a MacBook Pro running Apple Logic Pro multitrack recording software.

“The show does not use prerecorded tracks,” he says. “We usually pare it down to 32 tracks or less onstage and everyone is playing live. Having the SD9 gives me complete control over the audio coming from the stage, so I can mix it as though I was doing an actual FOH gig, but I can also send the band what they want to hear in the monitors and IEMs, and I can send submix stems to the production mixer. I can do all that easily because the SD9 lets me set the work surface the way I want it. I build it from the ground up. You don’t have to be an IT guy to run this console.”

Lanham says working a music show for television inevitably still puts the music secondary to the narrative. “There’s been a few times where they’ll ask us to move the PA for a better camera angle,” he says. “And the pressure is always on—the bands get maybe an hour to prep and soundcheck, and then they start filming. The costs are so high that everything has to work like clockwork. The SD9 has a lot of flexibility, so I had all my work-arounds all ready to go, if needed.”

DiGiCo’s broad acceptance in music touring has actually helped that: Lanham says that the FOH engineer for Halsey, which carries a DiGiCo desk on tour with them, was able to walk right in and set the console up from memory. “He didn’t even need to plug in a file,” Lanham recalls.

Steve McNeil can attest to the SD9’s flexibility. A veteran engineer who coached Lanham on the SD9’s operation, he also took over Lanham’s multifaceted role when Lanham had to leave for another project. “I covered for Bill when he got called away on tour, and I was able to pick up instantly where he left off, mixing performances by Gary Clark Jr., Robyn Hitchcock, Eddie Vedder, and Nicole Allen,” says McNeil, who adds that the SD9’s ability to be accessed remotely via an iPad was a huge advantage on the set.

“I was leaning down next to Eddie Vedder before one scene and I was literally taking his monitoring ‘order’ as though we were in a restaurant. He’d say, ‘Can I get a dollop of some sweetness?’ and I’d add some reverb in the monitor while standing right next to him. It was funny, but it made the production move along smoother and really shows what you can accomplish with the SD9.”

The SD9’s sound gets plenty of airtime on Roadies (though an SD8 was brought to the set to act as a prop onscreen for one scene). But, like most of television’s technical wizards, the console and its engineer stay behind the camera. Except once. “On Episode Three they moved the band during the shoot, so I ran out and rearranged the microphones during the scene,” Lanham explains. “They were waiting for me on the other side—with a release form they needed me to sign.”