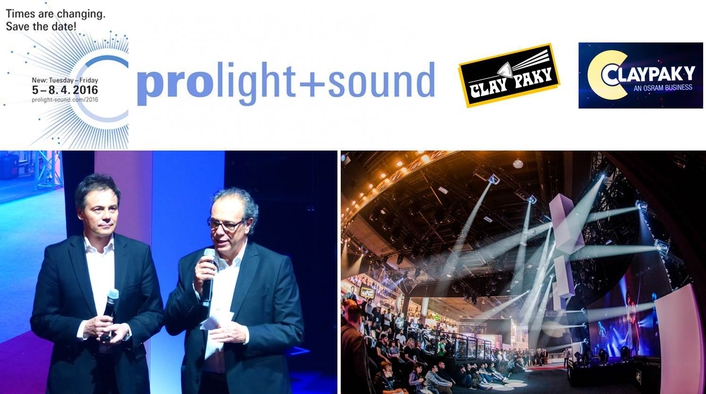 Clay Paky launched three new products for the first time internationally at ProLight+Sound 2016, all of which aroused considerable interest among industry professionals. The products were the stars of a demo/multimedia light show which accompanied the performances of some musicians and cover bands.

The Scenius Profile is the new beam shaper at the top of the Clay Paky moving head range. Its advanced optical unit and the 1400W OSRAM discharge lamp provide very high light output and an excellent CRI. Its framing system consists of four independent overlapping blades which create shapes of all sizes and proportions by working simultaneously on four different focal planes.

The Hepikos is a 700W washlight that combines low power consumption with colour quality, without compromise. Thanks to its PC front lens and narrow 5° beam angle, the fixture can also produce a sharp, thick beam, which may be used for striking, colourful aerial effects.

The SharBar is an advanced moving LED bar with features that transform it into a brand new multi-beam effect light. It fits six 30W powerful new OSRAM Ostar RGBW LEDs. The optical unit coupled to each LED consists of a motorized system with double mirror: this means each light beam can be pointed independently of the others or locked within a 60° (+/-30°) cone. Thanks to this ingenious, original optical unit, the SHAR-BAR can produce an effect similar to six separate lights working synchronously or asynchronously.

CLAY PAKY PARTY: LET’S CELEBRATE THE FUTURE
Clay Paky kicked off the celebrations for its first 40 years of history at ProLight+Sound this year. The Italian company was founded on 28 August 1976. Its fascinating history is dotted with many successes, in which genuine passion for show lighting and entertainment has always been its guiding light.

The anniversary celebration was held in Frankfurt and consisted of an open party at the Clay Paky booth at the end of the first day of the fair.
Pio Nahum, Clay Paky CEO, told the story of the company with pride and emotion, stressing that "Clay Paky must always look to the future. It must innovate continuously on the basis of its business know-how and wealth of experience to ensure a bright success for years to come.”
The celebrations were attended by hundreds of guests: trade professionals, friends and - above all - distributors, who have worked faithfully together with the company in the promotion of the brand worldwide.

A NEW LOGO FOR CLAY PAKY
Clay Paky's new logo was presented to the Press for the first time exclusively at a joint Clay Paky/Osram press conference. CEO Pio Nahum explained the reason for the logo: “This year Clay Paky is celebrating its 40th anniversary. This milestone is the perfect chance to update our corporate identity. The Clay Paky logo is a strong reference point for all lighting professionals, but a company that creates innovation sometimes needs to evolve its image. By adopting a more 'modern' design, the goal is to pave the way towards the future, always ready for new challenges.”
The new logo will come officially into use from the end of 2016.

SIX AWARDS FOR BEST PERFORMANCE
During the event, Clay Paky presented its distributors with "Ambassador of Light” awards.
“Best Distributor of the Year" was awarded to Ambersphere Solutions, Clay Paky's United Kingdom and Ireland distributor. ACT Lighting, distributor for North America, won the "Best Performance" award for the second year in a row. The "Most Progressive Award 2015" went to Dimatec, France. The "Most Loyal Distributor" award went to the German company Lightpower, for long-standing brand loyalty. The award for "Best Open Day" went to the Spanish Stonex, while the "Amazing Determination" award was given to the Greek distributor Omikron ProLighting. 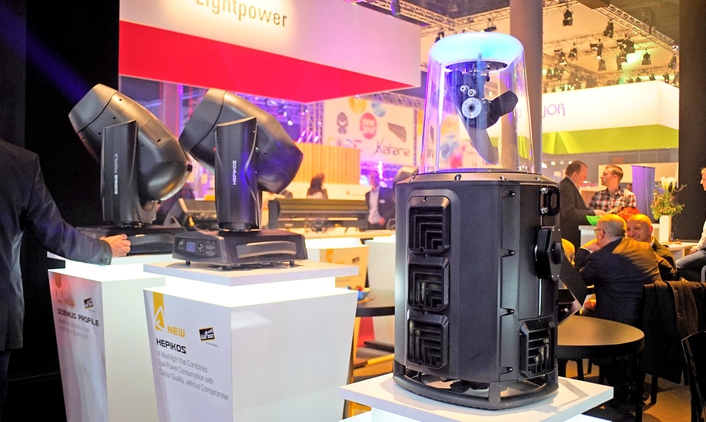 LIGHTING DESIGNER BJOERN HERMANN AWARDED FOR THE "SHARPY ORCHESTRA”
The Opus - German Stage Award, one of the most prestigious awards in theatre and stage production, was presented this year to Björn Hermann. He received the award for the production of the Fraunhofer Annual Meeting in 2015, which featured the especially creative use of moving light as a focus for the performance on stage. In his acceptance speech, Björn Hermann cited Clay Paky Sharpys as indispensable tools to achieve the desired result.
Björn told us: “We developed the idea of using fixtures as the actors, rigged on stage as if they were an orchestra. We wrote a storyboard, with the Sharpys playing the leading role, and then spent a year programming the beams and movements of each individual fixture.” Hermann remarked: “I chose the Sharpys as I needed a fixture that was fast with perfect optics to create a powerful beam. The exterior of the Sharpy also looks great, which was important as they were the stars of the show.”