Super Bowl Halftime Shows always come with challenges, and the daylight-into-sunset timing of this year’s entertainment made it “much more complex from a lighting standpoint,” Barnhart notes.  “We had fewer fixtures than normally because of the ambient sun and the small portion of stadium lights we used.”

It was Barnhart’s lighting design goal “to bring the kaleidoscopic color from the LED floor on the Coldplay main stage into the entire stadium.  That was the centerpiece of the creative approach: to make the stadium part of the show. That’s why we did a colorful card stunt with the fans and placed Color Bloc IIs on the railings.  With a daylight Halftime Show you see the fans and the stadium, and we wanted to bring the show into the stadium.”

He chose 36 B-EYE K20s for the pyro trusses/field carts upstage on the Coldplay stage; nine fixtures were placed on each of the four carts.  “You could see all the B-EYEs close up; they looked like floor lights,” he says.  “So we were able to draw up the video floor in close ups looking head-to-toe at Chris Martin.  The B-EYEs made the color palette on the floor appear in the close ups.” 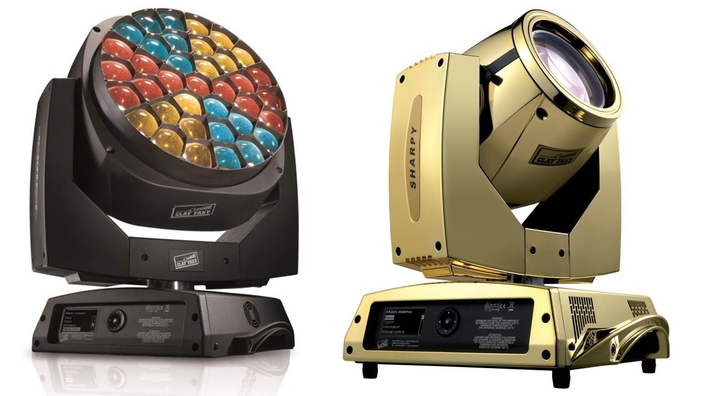 Clay Paky B-EYEs made their Super Bowl debut when Bruno Mars headlined the Halftime Show two years ago, notes lighting director David Grill.  “They’re great!  They give you a lot of options: large faces, beams, movement, effects.  The scale of the B-EYEs, with their large faces, gives mass quantities of color to individual pixels.”

He also likes the B-EYEs’ low power consumption.  “You can plug everything into one multi-cable,” says Grill.  “You don’t need piles of cables and piles of power.  That’s really useful when you have fast set ups.”

Francesco Romagnoli, Clay Paky Area Manager for North and Latin America, added, “It’s an honor to have been involved in so many Super Bowls, one of the highest profile television events in the world.  Mr. Barnhart and Mr. Grill always do great work with our fixtures.”