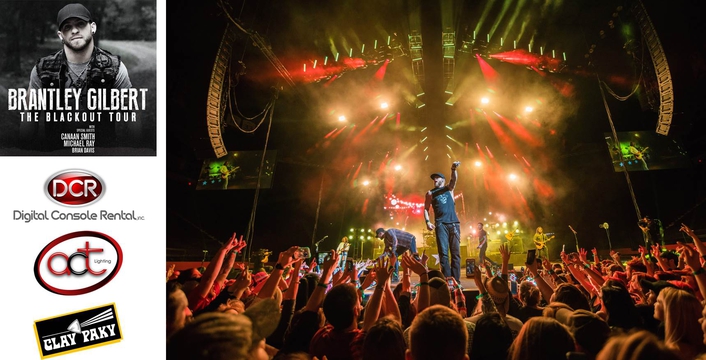 Howard Jones and Nate Alves, who codesigned the lighting for Brantley Gilbert’s Black Out World Tour, have selected an array of Clay Paky fixtures – including the new Scenius moving head spotlight – for the current leg of the arena tour.

Gilbert, the country rock singer and songwriter, kicked off the US and Canada leg of the Black Out World Tour playing to capacity crowds in Saginaw, Michigan.  After the tour wraps this spring Gilbert will take a breather before launching the Take It Outside summer tour.  The current lighting rig will be reprised for the summer tour.

Howard Jones, is president of DCR (Digital Console Rental, Inc.) in Nashville, which provides the sound, lighting and video for the Black Out World Tour.  He also designed  Gilbert’s previous two tours: Hell on Wheels in 2011 and Let It Ride in 2013-14.

“I’ve been with Brantley since early in his career, and he gives DCR a lot of latitude in designing his shows.  We oversee everything from overall show design to video content creation even down to the graphic design for the tours’ trailer wraps,” says Jones.

“When we designed the truss for all three tours we tried to touch on iconic symbols for Brantley.  The truss needs to be part of the design, not just hang lights,” he explains.  “We touched on his bad boy image with the brass knuckles rig for his first tour, then the rebel flag theme for Let It Ride.  This tour has a motorcycle theme with the handlebars and headlight downstage and the curved main body contouring the gas tank.  The fixtures we chose brought the truss to life.”

“The idea is to bring Brantley inside an environmental space and remove him from the arena,” says Alves.  “We wanted to keep the show energetic, very rock ’n roll, and it looks bigger than the budget allows.  We knew the number of trucks production wanted, and  the production budget for the tour was fixed. So using fixtures that did more than one job was important to us.  The fixtures we selected are versatile across their range.  People tell us it looks like we used a lot more gear than we actually carry.”

An early adopter of new products, Jones was eager to deploy DCR’s inventory of Clay Paky Scenius fixtures on this tour.  “We are among the first companies in the US to offer Scenius, which gives us an advantage,” he reports.  “Anybody can join the party later, but being early adopters sets DCR apart.”

Jones and Alves distributed 16 Scenius fixtures throughout the main body of the truss and placed 15 more in the downstage truss.  “We use them as the primary front light for everyone except Brantley,” Alves explains.  “Scenius has a great flat field and an amazing color temperature out of the box.  I’m really impressed by it.” 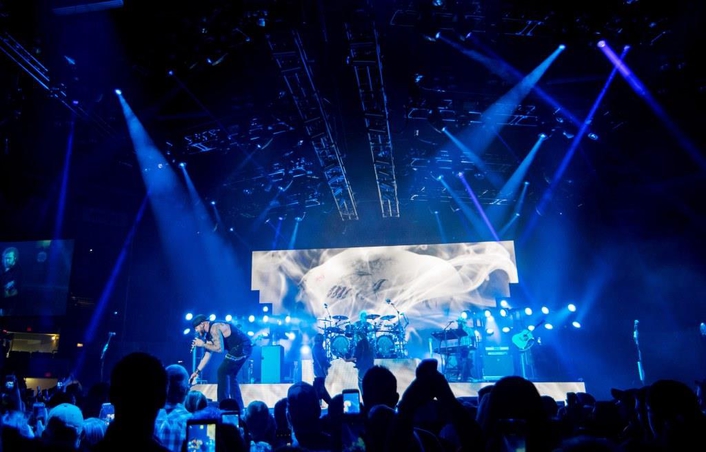 Scenius is a moving head spotlight at the top of the Clay Paky range.  Its advanced optical unit and new 1400W OSRAM discharge lamp provide a much higher light output than with previous generation 1500W lamps.  Its wide 8°-50° zoom make it perfect for every use.  A modern focus tracking system concentrates maximum luminous efficiency precisely on the effect users wish to project; the focus may be set to be fully automatic.

Scenius is known for its white light and color reproduction fidelity; its very high CRI is extremely unusual for a metal halide light source.  Colors cover a broad spectrum, even including pastel shades; two rotating gobo wheels, a rotating prism and interchangeable graphics wheel generate spectacular new effects.  The fixture can also be used in wash mode by inserting a newly-designed frost filter.

Even though Scenius is new to the US, Jones and Alves had no hesitation about using it.  “Clay Paky is known for this type of hybrid fixture,” says Jones.  “We used Scenius during three weeks of rehearsals where it met all of our expectations.”

The lighting designers also have 34 Clay Paky Mythos fixtures in the finger trusses over the stage.  “Mythos has really established itself in the industry,” Jones notes.  “For a show this size it gives us great flexibility as we switch between spot and beam modes.”

Thirteen Clay Paky Stormy Strobes CC are making their tour debut.  Eight color fixtures are on the main body of the truss; five regular Stormys are on the downstage truss.  “We use them for their strobe effects, color toning and as full-on audience lights,” says Jones.

Eight Clay Paky Sharpys are on the floor downstage left and right where the designers deploy their effects package.  “This is the third tour for the Sharpys,” Jones reports.  “They’ve become a staple.”

Francesco Romagnoli, Clay Paky Area Manager for North and Latin America, added, “We’re very excited about the new Scenius fixtures and thrilled that they’ve been deployed on such a high profile tour.”