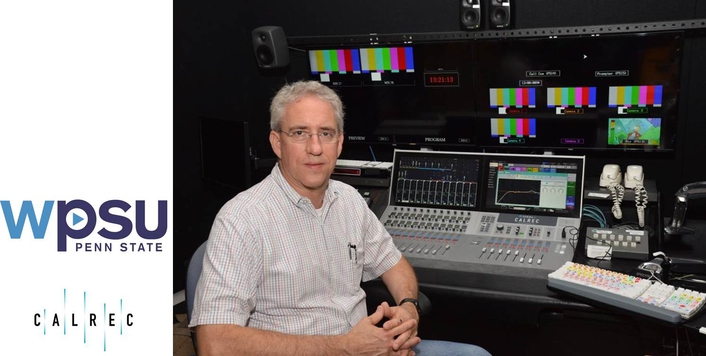 PBS affiliate WPSU at Penn State University has gone live with a brand-new Calrec Audio Summa digital mixing console. The installation is the realisation of several years of research and planning by WPSU Facilities Manager Kerry Trout, and the Summa is the latest link in WPSU's ongoing drive to upgrade and modernise its broadcasting facility.

"I became familiar with Calrec products 15 years ago, and I've always been impressed with the design, flexibility, and sheer power of Calrec consoles. But it's their fantastic sound quality that really puts them head and shoulders above anything else on the market," Trout said. "It was a great day when Calrec began working directly with educational institutions, which allowed us to bring it into our operation."

Under license by Penn State University and based in University Park, Pennsylvania, WPSU is a PBS broadcast station that has a relationship with the Penn State College of Communications. WPSU broadcasts the full PBS programming lineup and also produces a rich array of original programming for internet distribution as well as to a wide terrestrial swath of central Pennsylvania communities.

Through its partnership with Penn State, WPSU also offers valuable hands-on experience for Penn State broadcast students, giving them active roles in production and allowing them to work side-by-side with WPSU professionals in a live broadcast environment.

"One great thing about the Summa is that it gives us all of the power and sound of the bigger consoles but in a compact and modular footprint," Trout said. "Also, we know that the Calrec Summa will last at least twice as long as any other console, with the outstanding support we know we can expect from the Calrec team.

"Plus, the Summa is extremely intuitive and easy to use, which will give students a powerful tool for learning signal flow, processing, and audio design."

WPSU went live in late May with the new Summa, which is linked into the network's five studio spaces and serves as the core mixing console for the full live production lineup. With the start of the fall term in September, students will have the opportunity to learn the Summa.

"At Calrec Audio, a big part of our mission is to help foster and encourage future broadcast professionals," said Calrec Sales Manager Helen Carr. "Therefore, it's an honour to provide a Summa console for WPSU, which is not only a premiere PBS affiliate but also a first-class training ground for Penn State broadcast students.

"Like public TV stations everywhere, WPSU is providing an outstanding lineup of original, local programming on a limited budget. It's precisely the type of environment for which we designed the Summa, a compact and affordable audio-mixing solution that packs all of the power of our larger desks."