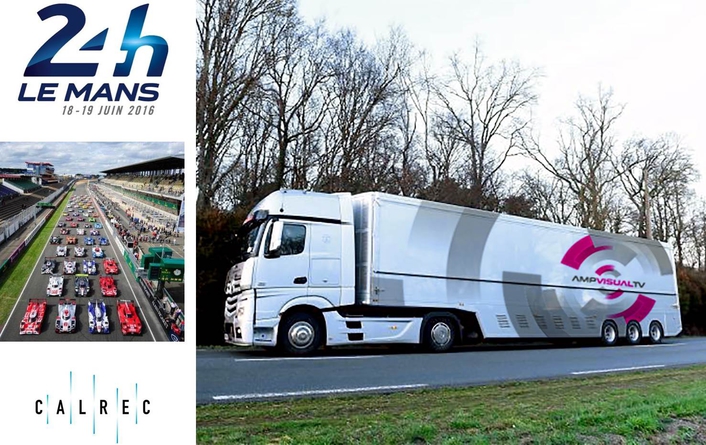 Calrec has entered the French broadcasting market with panache. Outside broadcasting (OB) giant AMP VISUAL TV has chosen the company's Apollo, Artemis, and Artemis Light audio consoles for its landmark new vehicle, marking Calrec's first sale in France. The new truck, the Millenium Signature 12 (MS12), will be the standard-bearer in the AMP VISUAL TV fleet and will make its debut for coverage of the 24 Hours of Le Mans endurance automobile race in June.

"With MS12, we had a unique opportunity to build the most versatile truck on the market. We wanted to be able to maximize the equipment for any size of international production. The flexibility and modularity of the Calrec desks made them a perfect fit for this vision. The consoles offer full redundancy to give us peace of mind for major events, and their plug-and-play operation simplifies productions and gives us even more versatility," said Emmanuel Le Marquand, audio operating manager, AMP VISUAL TV.

"Calrec is renowned for technology excellence in OB deployments, and the presales support we received was fantastic. We know we've made a great choice with Calrec."

In a departure from its chosen audio-console vendor after more than 15 years, AMP VISUAL TV has turned to Calrec Audio for MS12. The truck includes a 56-fader Apollo console, a 24-fader Artemis Light console, and a 16-fader Artemis sidecar that can be used to extend the other two. This offers AMP VISUAL TV the flexibility to use the audio equipment in a variety of different configurations both in and out of the truck. For instance, the Artemis Light can be removed and used in another location, such as a flight control room, and the Apollo can be extended by the sidecar to provide a total of 72 faders. MS12 can operate fully equipped when needed and support two productions at once, or it can run at 50 percent for smaller events.

"In a market dominated by one of our biggest competitors, the fact that AMP VISUAL TV has placed its confidence in Calrec is a huge milestone for our company. Not only is MS12 a showcase for leading-edge UHDTV broadcasting, but its built-in modularity is truly unprecedented for an OB truck of its size. This modularity is enabled in large part by the versatility of our Apollo and Artemis solutions."

About AMP VISUAL TV
As a specialist in TV coverage, AMP VISUAL TV provides services throughout the production process for live programs and those produced under live conditions. It has at its disposal one of the most extensive European fleets of OB vans for filming on location, and around twenty studios in the Paris region. More than 400 employees assist our clients in devising, designing and carrying out filming, transmission and broadcasting of programs destined for every screen format.