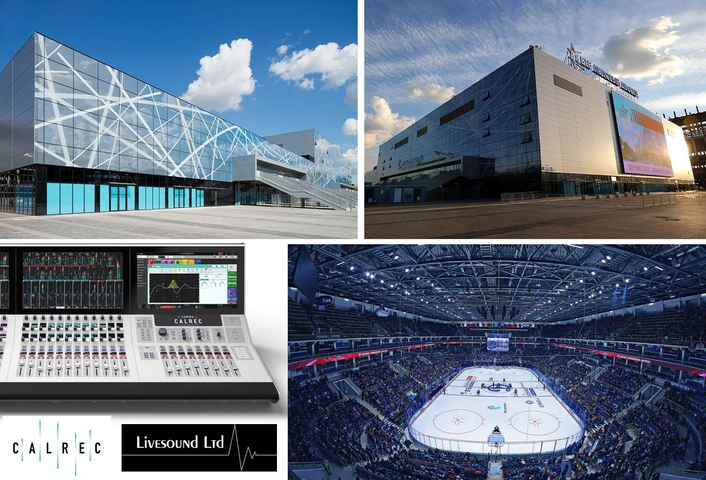 More fundamentally, Calrec's Hydra2 audio networking system enables audio from one or both ice arenas to be routed to a centralised OB truck terminal, where MADI, analogue, and digital ports provide a convenient access point for visiting OB units. Calrec's H2O software enables mic pre-amp gain to be controlled by visiting OB units regardless of the audio console in the truck.

"Until now we've operated separate sound systems for commentary, original venue sound, public address, and other applications based on the equipment of various vendors. But when we looked at the requirements for the VTB Ice Palace project, we realised that Calrec had the perfect solution for integrating all of these systems," said Andrey Mazurov, projects department head, Live Sound Ltd.

"Our customer was originally looking for two completely independent consoles and independent routing systems for each arena — but once they saw the networking possibilities of Calrec's Hydra2, they were hooked."

Italian OB service provider Telerecord took advantage of this simple connectivity when it provided broadcast feeds for the IIHF Ice Hockey World Championship. Using the Hydra2 access point, Telerecord was able to route audio from both ice hockey arenas to a single centralised OB truck equipped with a Calrec Artemis console. This setup was more cost-effective because the I/O and connections at the OB truck terminal did not need to be duplicated.

"A temple for ice sports fans everywhere, the VTB Ice Palace is a real masterpiece of design and a showcase of the latest technologies for live sports broadcasts," said Michael Reddick, international sales manager at Calrec. "I can't think of a more exciting project to mark Calrec's entry into the world of Russian ice hockey, and Livesound was the ideal partner to take us there. We look forward to working with Live Sound on plenty more high-profile projects in Russia."