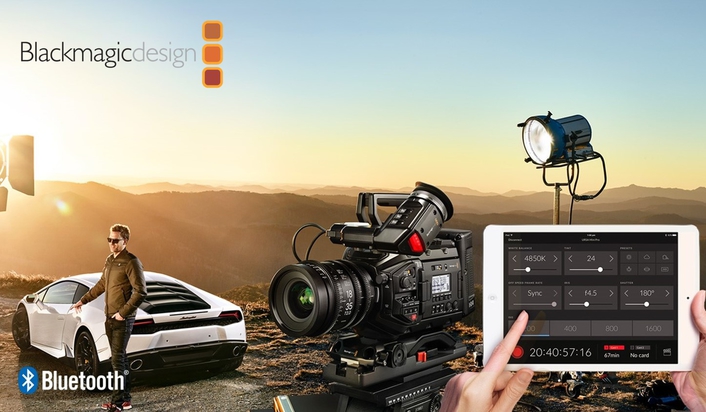 Camera 4.4 Update can be downloaded free of charge from the Blackmagic Design website. Once installed, customers can download the Blackmagic Camera Control iPad app from the Apple app store.

All URSA Mini Pro cameras feature built in bluetooth connectivity, which until now has not been enabled. The built in bluetooth will allow customers to to send and receive commands from up to 30 feet away. Once the camera is paired with the iPad, customers can remotely power URSA Mini Pro on or off, change all major settings, adjust and add metadata using a digital slate and trigger recording. The Blackmagic Camera Control app is perfect for customers that need to control cameras in hard to reach places such as on cranes, drones, in underwater housings and more.

To make URSA Mini Pro’s Bluetooth support even more flexible, Blackmagic Design has developed a new, open protocol and is publishing a developer API, along with sample code, for customers that wish to build their own camera control solutions. This free API and sample code will be available later this summer.

“URSA Mini Pro has become incredibly popular because of its amazing image quality combined with broadcast features and controls, built in ND filters and interchangeable lens mount,” said Grant Petty, Blackmagic Design CEO. “The new Blackmagic Camera Control app and open API means that the possibilities are truly endless. Customers are going to have the tools they need to build completely custom remote control solutions of their own design using the new Bluetooth support!”