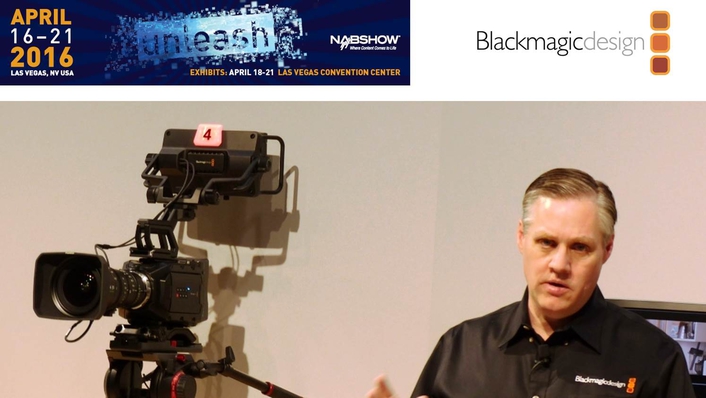 The Blackmagic URSA Studio Viewfinder features a large 7” high resolution screen and is perfect for camera operators working on live events at which they need to stand behind the camera and capture the action for hours on end. The all metal design is durable and features the highest quality variable tension mounting points available, as well as an articulated arm so the viewfinder can be raised, lowered, moved forward and backward. These mounting points can be set for the perfect amount of resistance so that customers can pan and tilt the viewfinder to whatever position they need.

The large RGB tally light on the rear of the monitor lights up red when the camera is on-air and orange for ISO recording. In addition, it includes customizable clip-on numbers that can be inserted for easy camera identification from up to 20 feet away.

When shooting a live event, it’s important to have physical buttons to quickly adjust settings on the fly. The Blackmagic URSA Studio Viewfinder features a physical dial, knobs and three customizable function buttons that let camera operators quickly adjust brightness, contrast, and peaking without having to hunt through menus while live on air. The customizable function buttons can be used for zoom, false color, edge focus detection, loading 3D LUTs and more. 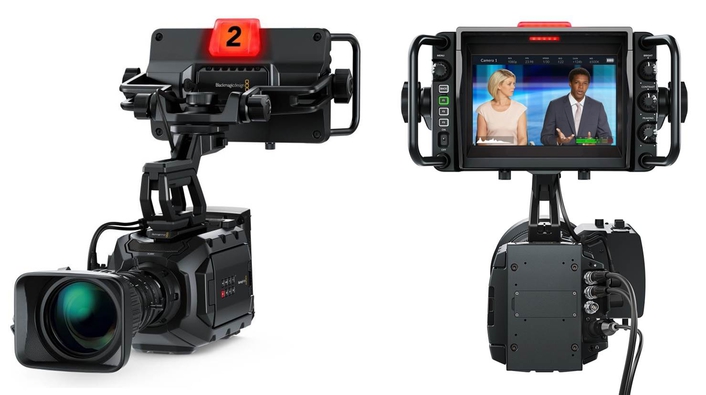 The Blackmagic URSA Studio Viewfinder displays frame guides that can show the location of a lower third, graphic, logo or ticker so camera operators can accurately compose and frame shots. In addition to viewing the built in camera HDTV, 4:3, 2.4:1, 2.39:1, 1.85:1 and thirds frame guides, customers can also create up to three black or white custom cursors that can have variable height, width and position, making it easy to match the location for all the graphics that will be added live or during later broadcast. Frame guides are an essential function for every viewfinder, especially during live production where graphics and other elements are going to be keyed downstream.

When attached to URSA Mini, the camera sends information via the SDI connection to the viewfinder so customers can see the critical information they need such as recording status, camera settings, battery life and more while shooting.

The design of the Blackmagic URSA Studio Viewfinder makes it familiar and easy to use for anyone that’s worked with other traditional studio cameras before, as the layout of the controls follows a familiar industry layout. The base of the viewfinder also features a standard V-lock bracket for mounting and detaching the monitor to the URSA Mini handle so it can be quickly set up and repositioned in seconds. This is especially important for camera operators at live events where they might need to set up the camera quickly or when they might want to quickly remove the viewfinder because the camera is going to be used with a shoulder mount.

Also available today is Camera Update 3.2, which is a free software update for URSA Mini that turns it into a true professional studio camera. The update enables features such as talkback, tally, camera control, color balancing, lens control and more from ATEM switchers. The update also lets customers set the camera ID, reference timing, and SDI output options that also make URSA Mini compatible with any live production switcher. In addition, customers can also use the headphone connection on URSA Mini for talkback communication with the director. 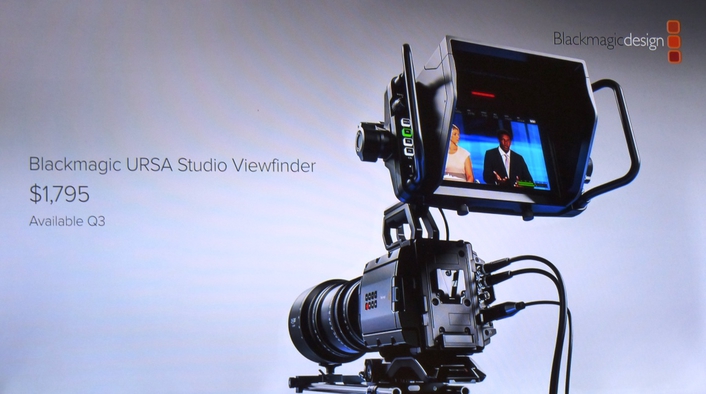 “The new Blackmagic URSA Studio Viewfinder and the new Camera Update 3.2 software update turns Blackmagic Design’s URSA Mini cameras into a fully professional studio cameras that are better quality than traditional video based studio cameras but are also fully designed for an Ultra HD future,” said Grant Petty, CEO, Blackmagic Design. “The URSA Studio Viewfinder is designed to make it comfortable for camera operators to work on long events. Now broadcasters can get the same kind of amazing digital film quality that they can now use on live events that previously only Hollywood feature films has had access to!”

Availability and Price
Blackmagic URSA Studio Viewfinder will be available in Q3 for US$1,795, from Blackmagic Design resellers worldwide.