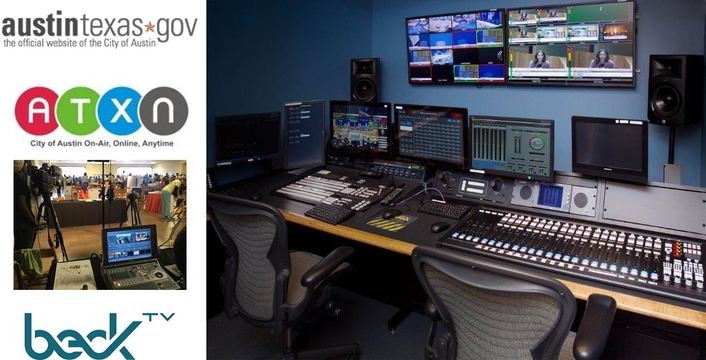 BeckTV, one of the United States' premier design-build systems integrators, today announced it has completed a system renovation at ATXN, the government TV channel for the city of Austin, Texas. The renovation included an overhaul of master control, the addition of a third control room, an upgrade to HD, conversion from tape to digital files, and a new network dedicated to video operations with enough bandwidth to stream the higher-quality signals. BeckTV's design enables ATXN to broadcast higher-quality programming much more efficiently than ever before.

"Our old control room was standard definition and outdated, which made for a process full of work-arounds and manual steps. Most of our equipment was no longer supported by the manufacturers, which made maintenance and upkeep difficult. And when there were issues, it was hard to get support and figure out how to get it working correctly," said Keith Reeves, ATXN station manager. "Now, thanks to BeckTV's expertise, we have a well-organized system that lets us broadcast in much higher quality, saves time, and frees our producers to do the jobs they were hired to do. And best of all, we're confident knowing that all of the equipment will work together and keep us on the air."

ATXN is responsible for uninterrupted coverage of all City Council, board, and commission meetings that take place at City Hall and various remote locations all over Austin — many of which are run by only one operator and can last more than 12 hours. To keep up with approximately 45 meeting broadcasts per month and 280 field productions per year, ATXN's goals were to connect master control to producer edit stations, get off of the corporate IT network, share storage between edit stations, improve the quality and ease of insertion of computer graphics, and banish videotape in favor of real-time ingest. ATXN also wanted to broadcast in HD quality.

After researching the basic equipment it would need, ATXN called upon BeckTV to design a cohesive system that would work reliably, withstand the demands of sustained use, and lend itself to one-person operation.

"BeckTV has installed hundreds of control rooms all around the country, and we were able to mine that expertise and use it to our advantage," Reeves added. "BeckTV listened patiently and ultimately designed a system that fulfilled our ambitious specs for delivering signals from the meeting rooms or studio back to the control rooms and then out to all the distribution points — including four different cable providers, closed-circuit TV monitors in City Hall, and three Web streams." 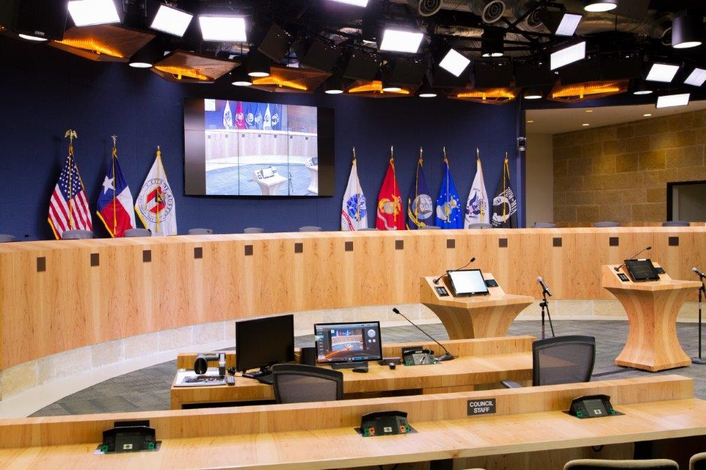 BeckTV designed three control rooms and a master control system that met all of ATXN's goals, with built-in automation that allows a single operator to manage the workflow. For example, with the new system, an ATXN operator can recall camera shots, call up CG text, and put the content on air all by simply touching a council member's picture on a touch screen. In another area of efficiency, BeckTV built a network that eliminates the need for producers to transport tapes or DVDs between the edit suites and the control rooms on different floors. Instead, the operator can simply grab edited files from a network folder and schedule them for playout.

BeckTV installed a new Ross Extreme HD router and distribution, patching, and QC equipment. The three control rooms rely on Ross Carbonite switchers using the Ross Legislative Control System (LCS), which allows ATXN to control 17 Sony PTZ cameras, the switcher, and Ross Expression CG all from one touch screen. A Wheatstone audio-over-IP console ensures that all mics are shared among the three rooms. BeckTV also installed Crispin automation for master control on-air operations, an EditShare Flow server for ingest, and two EditShare Geevs servers for on-air playback. An EditShare archive and RAID system allows ATXN's editors to access all content on the servers for postproduction editing and content creation. In addition, the system relies on Tightrope Media Systems for on-air billboards and Swagit software to stream three HD channels live or on demand over the Internet.

"ATXN televises more meetings than any other city in the country. Now ATXN has control rooms that can handle the demands of long, continuous shoots with a far more efficient workflow that is simple enough for one person to run," said Abel Sassenhagen, project engineer at BeckTV. "The whole idea behind our design is simplicity. In order to accommodate 12-hour shoots, we automated as much as humanly possible and built in triple-record backups just in case. The ATXN installation is an excellent example of what is possible in local-government broadcasting."