BeckTV, one of the United States' premier design-build systems integrators, today announced that it has completed a new HD production control room for the City of Frisco's Dr Pepper Ballpark and the Frisco RoughRiders, the Class AA Minor League Baseball (MiLB) affiliate of the Texas Rangers. The Texas ballpark is rated among the best in the minor leagues, and it undertook the project to complement a new 85-foot by 33-foot Daktronics LED video display. With design firm WJHW consulting on the project, BeckTV installed and took the new facility online within the month preceding the Frisco RoughRiders' April 9 home opener.

"When our new RoughRiders ownership group purchased the franchise in August 2014, we immediately set out to transform the in-game experience at Dr Pepper Ballpark, highlighted by a cutting-edge audio and visual entertainment platform," said Chuck Greenberg, RoughRiders chairman and managing partner. "We turned to BeckTV for our HD production control room project because of the company's impressive experience and the passion that the BeckTV team shows for its work."

BeckTV was engaged to supply and install a professional, high-end production control room that would enable delivery of advanced graphics to the giant video wall while simultaneously producing the television broadcast of the Frisco RoughRiders baseball games. With the addition of wireless cameras that can broadcast from anywhere in the ballpark, the production room now serves as an interactive hub where the team can engage spectators from any of the unique entertainment areas around the park.

The project was awarded to BeckTV late in February 2015, and the company started its on-site work on March 16. Installation and commissioning were completed within just three weeks, leaving room for training prior to Frisco RoughRiders' Opening Day 2015. For this project, BeckTV designed and fabricated custom consoles and wired the all-new control rooms. The company supplied and integrated components including cameras and lenses, wireless camera systems, and wired and wireless intercom systems, as well as a switcher, CG, video and audio router, replay server, A/V player, and a KVM system. The systems installed by BeckTV also digitally encode the produced program feed onto the existing in-house CATV where it can be distributed in HD to any TV within the facility including the suites, restaurants, lounges, team store, and throughout the rest of the park.

"Visually striking and engaging video presentations — both on the big screen and throughout the facility — have become an integral part of the experience at today's leading sports venues," said Brendan Cline, systems engineer and project manager at BeckTV. "The new HD production control room at Dr Pepper Ballpark gives the Frisco RoughRiders state-of-the-art tools for engaging fans in on-field action, and it is sure to play a central role in the ballpark's ongoing popularity." 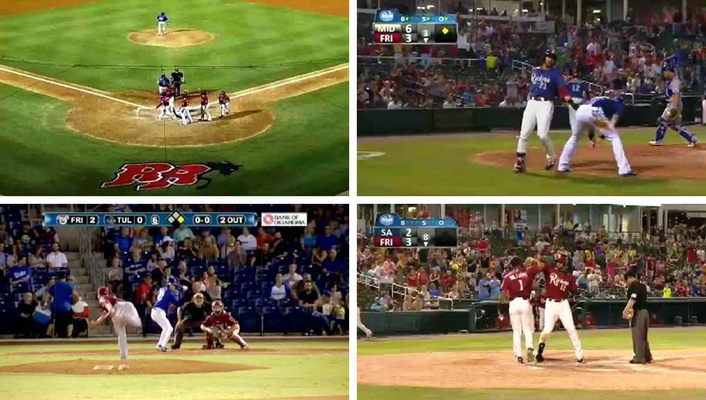