System integrator ARET, Lawo’s partner in Italy, presented at this year’s IBC a radio OB van with a brand-new concept for this category, making this truck the first of its kind. For this technologically sophisticated OB unit with Lawo IP installation, ARET recently won the “Outstanding Innovation in OB Engineering Award” of the BroadcastPro Middle East Awards 2018.

The vehicle was designed and built exclusively on customer specifications. ARET’s Middle East client required a special OB Van that could endure the harsh weather conditions of the region and quickly operate under any circumstance. One of the peculiarities of the vehicle, in fact, is that it can be fully operational with expanded or closed wall.

The heart of this radio OB van is based on Lawo IP technology: the main mixer is a 24-fader sapphire console with an 8-fader crystal as backup mixer. Both radio consoles are connected to the Lawo management and UI builder software VisTool, which allows to expand the mixers’ functionalities and control them from the adjacent radio studio by a touchscreen monitor. 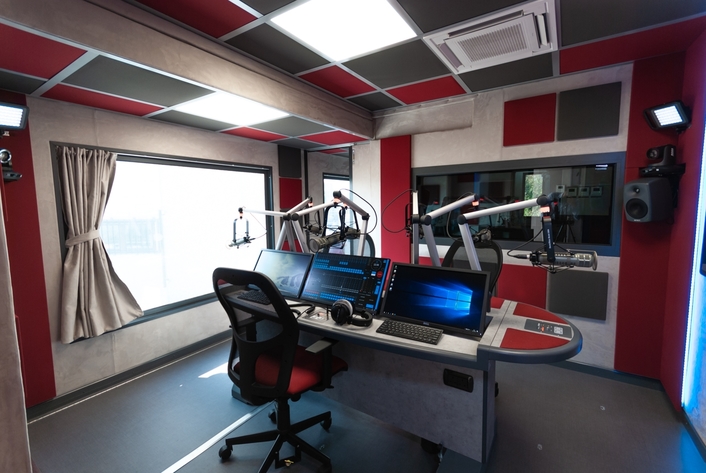 Inside there are two large operational areas which are connected by a corridor when the side walls are expanded. Two large studio windows are designed for supporting interaction between the host and guests on the radio program and the public outside the truck, like during productions on public squares, at concerts and in stadiums. Always with the purpose of creating more synergy with the public, the OB van is equipped with a PTZ camera positioned on a telescopic mast (with a maximum height of 8 meters) that allows shooting external images of the location of the crowd. 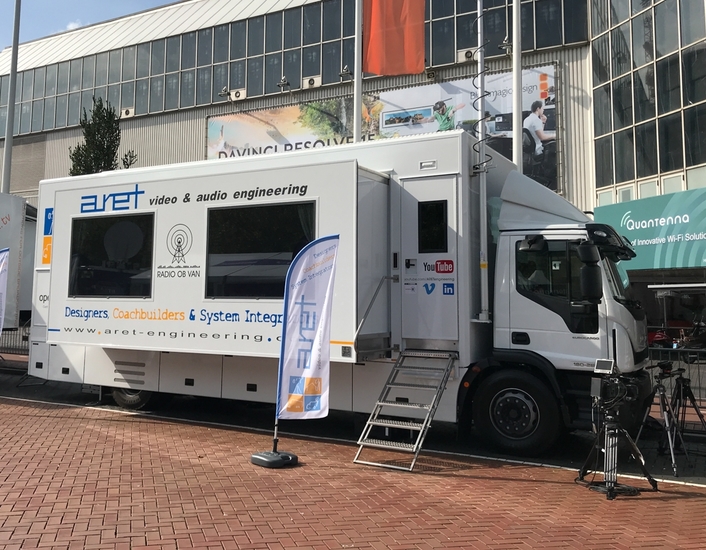 The truck provides rear and front entries, both positioned directly on the OB van’s main structure and not on the side expansion: this strategic placement of the entrances allows to access the internal areas both when the expansion is open and closed. The inside of the truck is divided into three different areas: By accessing the OB van from the front door, there’s a small antechamber that serves as a waiting area before entering the main studio. This entrance area prevents anyone that wants to access the OB van from disturbing the progress of the programming while the transmission is On Air.

The radio studio features a custom modular table that can accommodate a variable number of guests, depending on the configuration. With the closed expansion, it is possible to accommodate the host and up to three guests; with expansion, the number of guests can rise to six. The table is engineered to change shape and position as quickly as possible and can be quickly moved from one side of the room to the other. 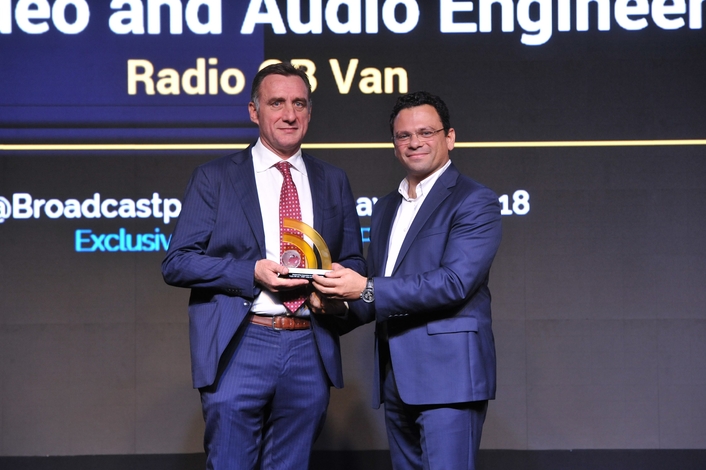 In the corners of the studio, a lighting system for television and PTZ cameras are used to light and shoot images of the host and guests while On Air. The full integration with the video switcher allows controlling the PTZ cameras directly from the console of the mixer. If necessary, through a touch-screen monitor placed on the studio table, the host can directly control the cameras, recalling shots and presets.

The images coming from the PTZ cameras can be seen live on the 49" monitor inside the studio that can also be used to view the signals coming from the multiviewer or the computers installed.

The construction philosophy of the OB van’s radio studio is the same used in typical recording studios, realizing a "box in the box": all the walls, ceiling, and floor are covered with unique materials, to maximize the performance. The walls and the ceiling of the technical room have the same composition, acoustic treatment and sound insulations properties such as those of the main studio. A small apparatus room in the rear, acoustically insulated from the technical area, hosts all the equipment and acts as a storage compartment.

Each area, including the racks, has a completely redundant air conditioning system. Besides, this OB van, as per ARET standards, has an automatic leveling and stabilization system that can be operated through remote control, and a logic system for controlling mechanical movements and transport conditions.