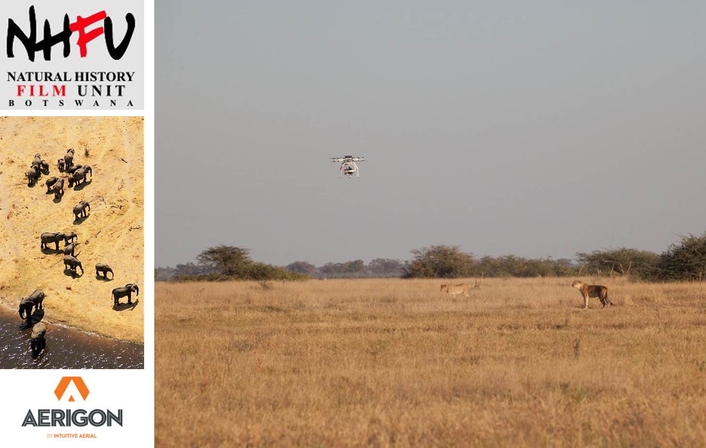 The Natural History Film Unit (NHFU), based in Botswana, relied on the AERIGON UAV to capture aerial images of predators and prey for BBC Natural World’s The Return of the Giant Killers – Africa’s Lion Kings. The result is ground-breaking 4K footage of lions as they track their buffalo prey in the wild and an incredible audience experience of nature. By providing the industry’s first professional airborne camera platform, AERIGON allows the filmmakers to capture overhead angles and perspectives with precision, efficiently and with minimal environmental impact.

“The AERIGON is unique in that it’s the most stable system out there,” said Brad Bestelink, Director and Producer at NHFU. “We chose it because it was the first to reliably fly a 4K camera, which is our main acquisition format.”

The NHFU used RED Dragon cameras on the project and AERIGON is the only serially manufactured UAV built for full-sized cinema cameras and lenses. With a total payload capacity of 35 lbs. AERIGON can carry over 20 lbs. of camera equipment, along with its gimbal. The AERIGON gimbal offers advanced stabilization for cameras and professional zoom lenses and complete FIZ (Focus, Iris, Zoom) controls. 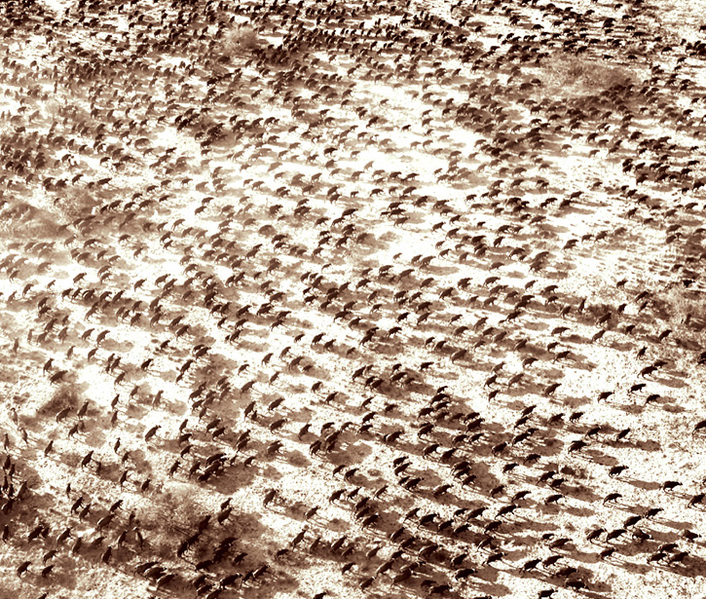 “Other drones look like Meccano sets with their wires hanging out and parts attached with tape,” said Bestelink. “Each of the AERIGON’s parts is a finished unit, meaning there’s less wear and tear on the system.”

Reliability and efficiency are crucial for Bestelink, especially for shooting in a natural environment where the crew needs to be ready at any moment to respond and move with the animals. “The lions aren’t waiting for us to assemble our equipment before they attack,” Bestelink explained. “The action happens only once and there’s no time to sit and fiddle. The AERIGON works for us because it’s plug and play.” 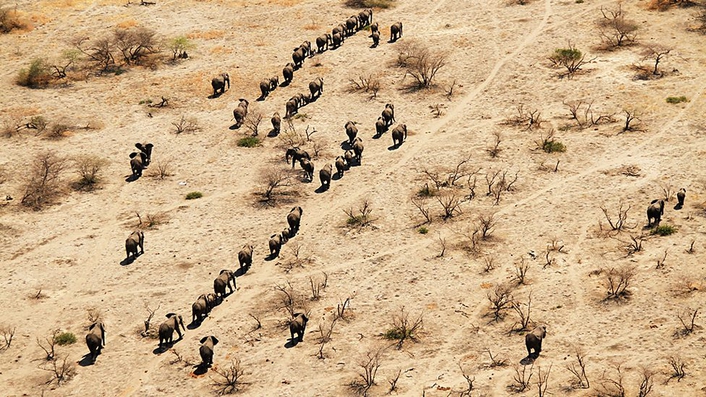 With AERIGON, Bestelink and his crew could move through the bush with the individual AERIGON gimbal and helicopter components already assembled. This allowed the team to get their cameras into the air and ready to shoot in short order.

Seeing Animals in their Natural Environment
Along with the BBC, the NHFU also produces shows for National Geographic Wild and Animal Planet USA, as well as other clients and projects, such as the recent Taylor Swift music video, “Wildest Dreams.” The company prides itself on filming only wild animals in their natural habitat. By shooting in 4K, 5K, and even 6K, the team is able to capture behaviour that has never been filmed before, including high-speed footage of large predators at 2K and 225 fps. 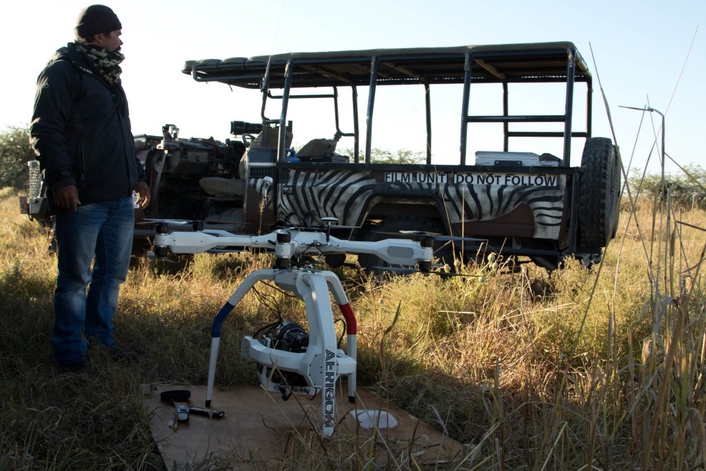 “We tell raw, real stories,” Bestelink said. “It’s a refreshing look at the natural world. We find that audiences prefer honesty to feel-good fantasies of wildlife. And, interestingly, when people see nature the way it really is, they end up caring more about animals.”

AERIGON has quickly become an indispensable tool for this type of observation-based storytelling with distinct advantages over other aircraft such as helicopters. AERIGON is much less obtrusive so that animal behavior can be captured without distractions or total disruptions such as downdraft. AERIGON is able to fly where helicopters cannot, is faster to deploy, requires fewer personnel, and is much more economical to operate. 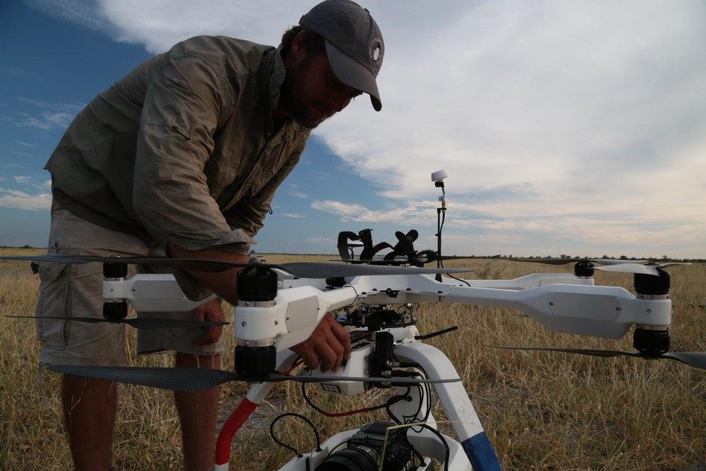 “We use the AERIGON to film where animals are interacting,” Bestelink said. “I don’t like to use aerials for the sake of aerials. They have to serve a purpose and function in the telling of a story. Most of the time, our aerials are matched and complement what we’re shooting simultaneously from ground positions providing a richer audience experience and a much better understanding of animal behavior.”

In one stand-out sequence, the team caught the moment where a new leader of the pride is established during a confrontation with a herd of buffalo as a young female lion takes the place of her mother. Only from the air can we see the full menace of what she is facing: it is not just a line of buffalo, but a massive herd of thousands. Likewise, while the audience can grasp that the Savute Marsh is difficult for the lions to cross, the true measure of the journey can only be seen from the air. 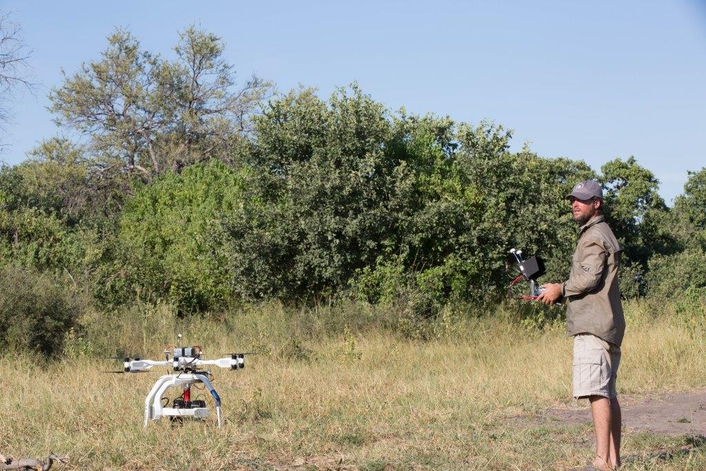 When asked whether he finds his work dangerous, Bestelink laughs. “Not really. I grew up in the bush. I find it much more frightening walking down a dark city street. Things happen out there that are natural. There’s no blame, no remorse, it’s survival. It’s a much more honest existence, in a way, and I think we lose touch with that, living in society and in cities.”

Return of Africa’s Giant Killers was released on Aug. 19 for BBC. It will be distributed in the U.S. on America Animal Planet in early 2016.