Welk Aviation has made a bold move into the professional unmanned aerial vehicle (UAV) market with the purchase of two AERIGON aerial remote camera heads (ARCH™) from Intuitive Aerial. The AERIGON, for which Welk Aviation has received an FAA 333 exemption, will provide an expanded palette of HD and UHD aerial camera capture for the helicopter company’s TV and motion picture clients. This is a significant development for Hollywood filmmakers and L.A. broadcasters, who now have access right in their backyard to the only professional ARCH capable of operating heavy broadcast and feature film-ready cameras and lenses.

The AERIGON is the first serially manufactured ARCH built for use with heavier cameras and lenses. With a manufacturer-approved payload capacity of 35 lbs., the AERIGON can carry over 20 lbs. of camera equipment, along with the gimbal. The innovative AERIGON Gimbal features a proprietary advanced stabilization system for cameras and professional zoom lenses, with full FIZ (Focus, Iris, Zoom) controls. This allows Welk Aviation to operate whatever equipment its clients favor, including cameras such as the Phantom Flex4K, Sony F55, RED Epic, and Alexa Mini.

“The AERIGON is revolutionizing aerial photography and adds a powerful new tool to our arsenal, allowing us to go where helicopters can’t,” said Patrick McKernan, UAV and Special Projects Production Coordinator at Welk Aviation. “It can fly down alleyways or split buildings in downtown L.A. It expands way beyond what we can do with a stabilized remote camera mount or a camera car. It gives news producers and film DPs the ability to get almost any shot they dream up.”

An FAA-certified helicopter pilot and instructor, pro skydiver, and SAG actor with credits on many feature films, McKernan followed the UAV industry for two years, waiting for the technology to catch up to his needs and expectations, before selecting the AERIGON as Welk Aviation’s go-to system.

“Without question it’s the best all-in-one cinema and broadcast UAV available,” said Larry Welk, Owner of Welk Aviation. “Our crew of professional pilots and photographers who specialize in this unmanned world made the decision after extensive research, not only because of the UAV but because of the team behind it.” 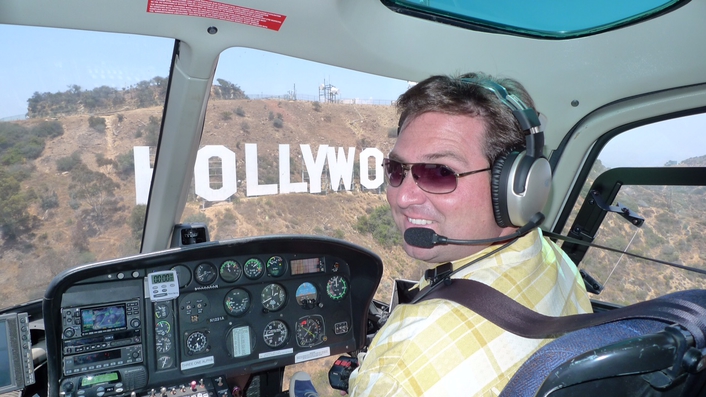 Embracing the future of aerial photography in cinema and broadcast
Welk Aviation offers a variety of services in addition to its news gathering for NBC Los Angeles and KTLA, including film and TV production, inspection and patrol of power lines and construction sites, and flight training. Given its FAA 333 exemption, Welk Aviation can use the AERIGON legally in all aspects of its work.

The requirements of each TV or motion picture project will dictate whether the company chooses to use the AERIGON or a helicopter. While helicopters can carry full-size camera gear and the personnel to operate it, handle windy conditions, and fly further and longer, the AERIGON will be used when a smaller, more agile vehicle is needed.

“Having remote access to the AERIGON means we can fly into situations where our helicopters can’t,” Welk explained. “It can fly under bridges, near power lines, around obstacles, and inside buildings whenever we need to gather HD or UHD footage. It’s a lot less expensive to operate and has a lower impact than a helicopter – we don’t have to close down two square blocks in Hollywood every time we want to get some footage with the AERIGON.”

Using the AERIGON to Train the UAV Pilots of the Future
“Professionals don’t have time to play with toys or someone’s science experiment,” said Eric Bergez, VP at Intuitive Aerial Inc. “Mid-size prosumer drones with their small payload capacities rarely meet the requirements for modern TV and film production. Until the AERIGON, precision capture using a UAV was just not possible.”

Broadcasters have been reluctant to embrace UAVs because they’ve been disappointed by unfulfilled promises and poor-quality aerial footage. This is where the AERIGON and Welk Aviation’s piloting experience in the film and TV realms makes all the difference. The company has developed an FAA-certified Part 141 flight training course for UAV pilots based on its proven training program for conventional helicopter pilots.

“We’re trying to set the standard for the industry and create a structured, safe, and knowledgeable environment by training the pilots of the future,” McKernan said. “I see so many UAVs being used in ill-advised ways. Safety has always been our paramount concern and the AERIGON goes above and beyond being safe, while meeting the quality standards for aerial camera capture.” 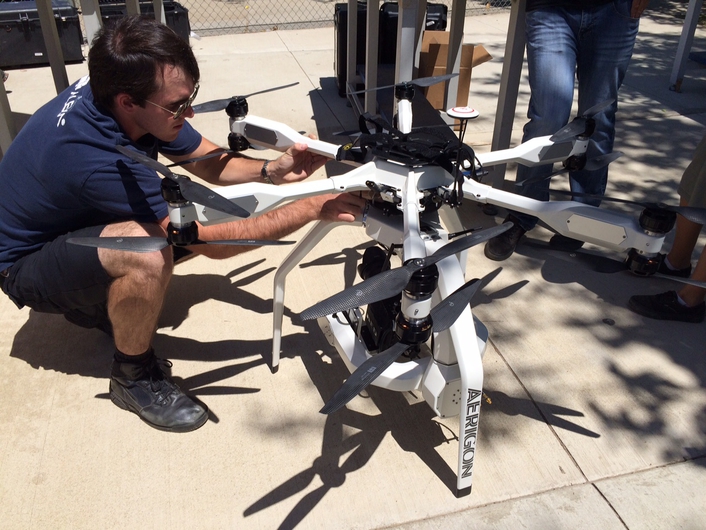 Along with the power, performance, and safety of the AERIGON, it was the modularity of the system that sold them.

“If we need to swap out a motor or arm, we can replace it with a new one within minutes instead of hours,” said McKernan. “For professional equipment, these kinds of details are essential. Intuitive Aerial is the only manufacturer that has a serial number system for its ARCH so that all parts are identified and can be tracked. The AERIGON doesn’t just look professional, it really is.”

“We’re at the dawn of a unique opportunity in broadcasting and film,” said Welk. “I like to compare it to the introduction of TV. Who knows how many new applications we’ll find using these aircraft? We’re already working on innovations for sports broadcasting and our production business will be enhanced and grow as a result of our relationship with Intuitive Aerial.”

“We’re excited that Welk Aviation chose to work with us,” said Bergez. “With them, we’re getting the endorsement of some of the best operators in the world, professionals with decades of experience in the feature film and broadcast news industry.”

About Intuitive Aerial Inc.
Intuitive Aerial is an international manufacturer of aerial cinematography systems for professionals. In addition to its aerial camera rigs, the company makes the AERIGON, the premium aerial remote camera head (ARCH™) for motion picture and broadcast applications. The AERIGON has been trusted to fly cameras on feature films such as Avengers: Age of Ultron and Into the Woods and on broadcasts such as BBC’s nature doc series, One Planet. Intuitive Aerial provides certification assistance and flight training for its customers worldwide.