Helicopter Film Services Relied on the AERIGON for Aerial Cinematography on Marvel’s Avengers: Age of Ultron 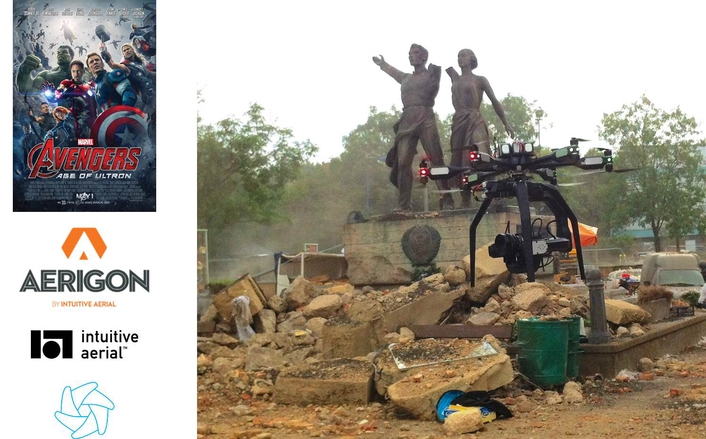 Industry-leading Pro Cinema Drone Provides Stable Platform for Capturing Live-Action Plates for VFX
The AERIGON™, an aerial remote camera head (ARCH™) from Intuitive Aerial, was operated by Helicopter Film Services to shoot aerial footage used throughout Marvel’s Avengers: Age of Ultron. The remarkable stability of the AERIGON platform meant that footage captured could be fed directly into ILM’s VFX pipeline. For the first time, filmmakers have access to an aerial system capable of controlling the best production cameras, such as the new ARRI Alexa Mini, regardless of weight, to shoot feature film-ready images with reliable precision.

“The AERIGON drone was able to fly at lower altitude than the helicopter, giving us more dramatic sweeping camera moves than we'd have been able to get otherwise,” said Christopher Townsend, Overall Production VFX Supervisor on Avengers: Age of Ultron. “It was quick and efficient to get it flying, with real-time visual feedback. The resulting footage was great, stable, and clean, which was an absolute necessity as we were using it as background plates, into which we added CG VFX elements.”

Helicopter Film Services (HFS) captured aerial footage on set in Hendon, U.K. for ten days during the production of the film. Its three-person crew flew the AERIGON carrying the RED Dragon.

“We had to get a stable shot the first time and the AERIGON let us do this,” said Jeremy Braben Aerial DP and founder of HFS. “Drones can leap about, but the AERIGON is the most stable drone we’ve seen without depending on post-stabilization. There isn’t the buzz or vibration with the AERIGON gimbal.”

“We could be working to the directions of three different people, all on the same day,” said Braben. “That made time in the air a premium during production.”

Capturing a bird’s-eye view of destruction
HFS created aerial view plates of a town before and after its destruction. The camera was aimed to cover off the set in tiles, so the plates would cover more space than the camera’s field of view. The VFX team built up a 3D model of the town using these plates.

“There were shots that we could only do with the AERIGON,” Braben said. “For one shot, we flew it from the top of a building, passed it through a portico, and brought it out the other side. You can’t really do that with a wire cam.”

Braben depends on a small team of experienced pilots. Pete Ayriss, who flew the AERIGON on the set of Marvel’s Avengers: Age of Ultron, is an RC championship pilot who has done a lot of 3D flying and has been piloting camera drones for five years. A camera technician assistant rounds out the crew. The AERIGON can carry over 20 lbs. of camera equipment, meaning that HFS can carry the camera equipment Braben favours, such as the latest ARRI Alexa Mini.

“It’s when we add a zoom lens to the camera, that the AERIGON becomes the only cinema drone capable of doing the job,” explained Braben. “The weight shift of adding one of these lenses to the camera doesn’t affect the balance. With the AERIGON we can choose lenses that fit, are light, and that productions like.” 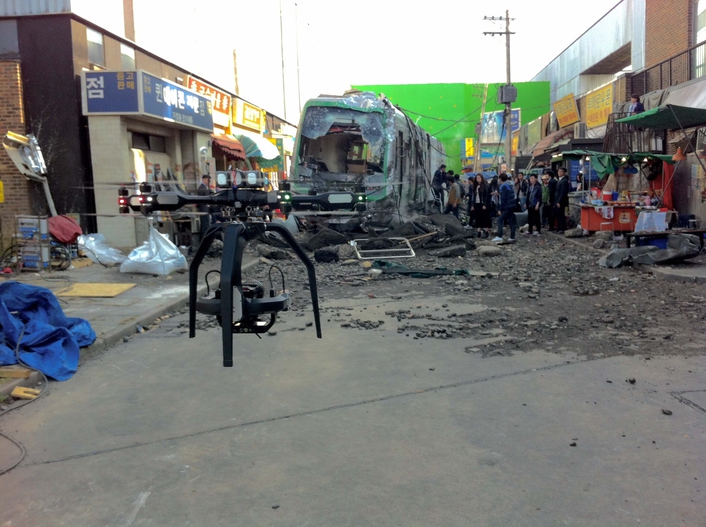 Braben relies on three lenses: the Angenieux Optimo 15-40 mm zoom, the Zeiss lightweight LWZ 14.5 to 45 mm, and the Zeiss Master Anamorphic Primes. Whatever lens and camera he chooses, the AERIGON gimbal and controller give him full FIZ (focus, iris, zoom) controls.

Combining two passions
Braben was a ground DP for years before becoming an aerial cinematographer. He also had a love of aviation and got his private helicopter pilot’s license. Combining his two passions – flying and cinematography – led to the creation of Helicopter Film Services in 1993. He closely watched the development of drones, wondering whether they could fit into his business. It was seeing the shots that could be obtained from drones that made him want to include them in his business. But he knew he had to find the right system. 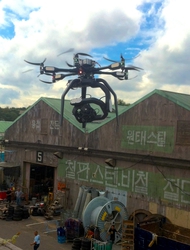 “Because we’re at the top end of film production, we work with high-end cameras and need a professional cinema drone that provides stable images,” Braben explained. “The AERIGON is that drone.

”With decades of experience using helicopters, wire cams, tracking vehicles, and, now, drones, Braben has thought a lot about how drones can best fit into production shoots. From this knowledge base, he is able to provide impartial advice about which equipment to use on a production.

“Because we can do any or all of these things, we can offer an unbiased opinion about what is the right piece of equipment for a particular shot,” he said. “On production, we assess whether a drone is a viable option.”

While other systems have their benefits – for example, a helicopter can go longer distances, fly at higher altitudes, carry heavier camera payloads, and hover – a professional cinema drone is flexible and can be operated for a fraction of the cost of a helicopter. It also moves in three dimensions, overcoming the limitations of using a crane, dolly, or wire rig, which are fixed in one dimension. HFS has done commercial work for Jaguar, Range Rover, and Aston Martin, among others.

“Drones are definitely having an effect on lower-budget productions that require an aerial shot,” Braben said. “You’re seeing this happening in television. There’s definitely an artistic advantage to getting some shots with drones that, until now, have been almost impossible to get.

”Then there’s the effect the AERIGON is having on feature film productions, with HFS using it extensively on Avengers: Age of Ultron, Into the Woods, and upcoming films such as Now You See Me: The Second Act, Mission: Impossible – Rogue Nation, Spectre, and The Huntsman.

“Drones allow filmmakers to design really creative shots and achieve them,” Braben said. “I love having the ability to realize shots with the AERIGON that others perceive as impossible. With the AERIGON, we have more flexibility and a more diverse palette to work with. We get shots that everyone’s thrilled about.”

About Marvel’s Avengers: Age of Ultron
Marvel Studios presents “Avengers: Age of Ultron,” the epic follow-up to the biggest Super Hero movie of all time. When Tony Stark tries to jumpstart a dormant peacekeeping program, things go awryand Earth’s Mightiest Heroes, including Iron Man, Captain America, Thor, The Incredible Hulk, Black Widow and Hawkeye, are put to the ultimate test as the fate of the planet hangs in the balance. As the villainous Ultron emerges, it is up to The Avengers to stop him from enacting his terrible plans, and soon uneasy alliances and unexpected action pave the way for an epic and unique global adventure.

Marvel’s “Avengers: Age of Ultron” stars Robert Downey Jr., who returns as Iron Man, along with Chris Hemsworth as Thor, Mark Ruffalo as Hulk and Chris Evans as Captain America. Together with Scarlett Johansson as Black Widow and Jeremy Renner as Hawkeye, and with the additional support of Don Cheadle as James Rhodes/War Machine, Cobie Smulders as Agent Maria Hill, Stellan Skarsgård as Erik Selvig and Samuel L. Jackson as Nick Fury, the team must reassemble to defeat James Spader as Ultron, a terrifying technological villain hell-bent on human extinction. Along the way, they confront two mysterious and powerful newcomers, Pietro Maximoff, played by Aaron Taylor-Johnson, and Wanda Maximoff, played by Elizabeth Olsen and meet an old friend in a new form when Paul Bettany becomes Vision.