4Ears and Mono get closer to the audience with DiGiCo 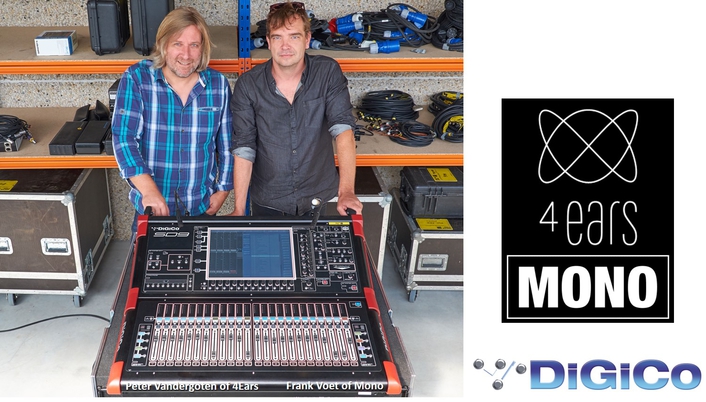 Peter Vandergoten of 4Ears and Frank Voet of Mono are more than just sound engineers. They are closely involved with their artists during production rehearsals and both deliver a full kit of microphones, wireless systems and mixing consoles to the bands they work with, which currently include Bazart, Adamo, Oscar and the Wolf, SX, Netsky, Absynthe Minded and Warhola. With most of the acts they are involved with, they become an extra band member and the gear they choose is crucial for connecting with their audiences. This is why both companies recently invested in DiGiCo SD9 consoles, supplied by the manufacturer’s Belgium distributor, Amptec.

“I was new to the DiGiCo family, but was immediately convinced it was the right way to go when the Stealth Core 2 update was announced for SD9,” says Frank. “Stealth Core 2 dramatically increases processing power from the existing 48 channels and 24 busses, to 96 channels and 48 busses, with multiband dynamics, dynamic EQs and DiGiTubes on all inputs and outputs.

“I also really appreciate the DiGiCo philosophy of adding horsepower to existing products every couple of years and not changing the product line-up itself, which could devalue your previous purchase. But the main reason I chose DiGiCo is the outstanding support and clear and fast communication from both Amptec and DiGiCo.”

For Peter, this is the second SD9 he’s purchased after decades of working with DiGiCo consoles. He has been a loyal user since the D5 and D1 were released, and values the fact that DiGiCo products are designed by actual sound engineers.

“Both Amptec and DiGiCo have a Rock ’n’ Roll spirit and understand the demands of today’s live sound industry really well,” says Peter. “I really like the SD Series’ ergonomics, which allows the user to completely personalize the console layout, while DiGiCo’s macro system allows even further customization and fast operation.

“Other features I rate really highly are the extensive automation options, Snapshot system and the seamless integration of Waves Soundgrid for plugin processing, and simultaneous recording and virtual soundcheck.”

Since Peter works as a FOH or monitor engineer depending on the project, it is really important for him that the SD9 is equally suited for both tasks. Frank, meanwhile, is travelling around the globe with bands like Netsky, so it is not always possible to bring his own console.

“DiGiCo consoles are available for dry hire all over the world,” says Frank.

“And they allow no-brainer session transfer between all SD Series consoles,” adds Peter. “When you add all that up, they really are the perfect solution for us.”