Sony and Vatican Media trial 8K capture with the UHC-8300 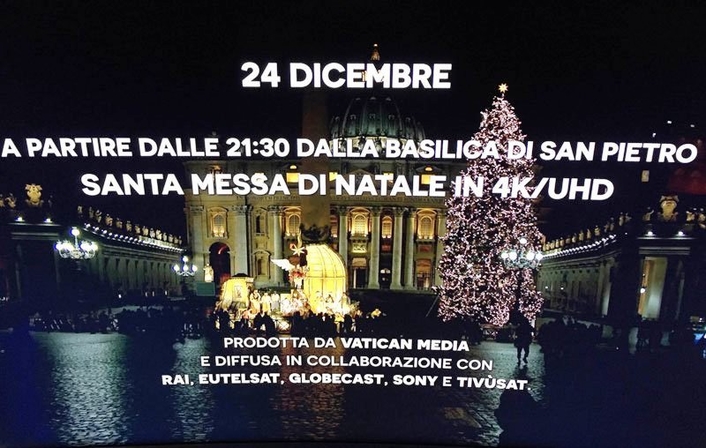 Vatican Media and Sony Professional Solutions Europe once again came together to continue their joint effort to study and evaluate future technology possibilities for capture and archive. For the first time on December 24th 2017, at 9.30pm in Rome, during the Christmas Eve Mass, presided by Pope Francis from St Peter’s Basilica, a trial capture in 8K took place.

A single Sony UHC-8300 camera equipped with three 1.25-inch 8K sensors positioned in the Basilica  captured the most poignant images of the liturgical ceremony. The UHC-8300 camera system, introduced during IBC 2017, can be used not only for 8K production, but also for 4K. It’s able to generate 8K, 4K and HD signal outputs simultaneously applying different colour spaces and multiple High Dynamic Range flavours. Real time cut outs from an 8K picture to a 4K image provides flexible framing when capturing large shots, enhancing the creativity and ultimately leading to a better programme. For this current test, an UHC-8300 and two PWS-4500, 4K live server recorded and captured 8K 120p images, which were not part of the, now regular, 4K HDR live production that was taking place simultaneously. 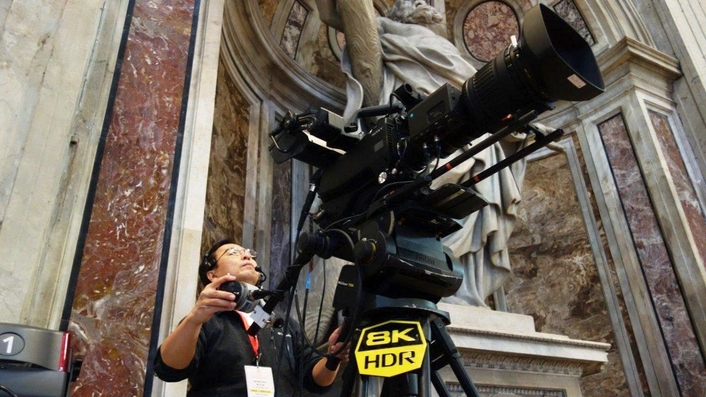 Sony and Vatican Media trial 8K capture with the UHC-8300

This experiment in 8K continues the long-standing partnership between Vatican Media and Sony Professional Solutions Europe. From the beatification of Pope Paul VI and the Canonisation of Pope John XXIII captured in Sony 4K, to the live worldwide broadcast of the Ceremony of the Closing of the Holy Door by his Holiness Pope Francis, in Sony 4K High Dynamic Range.

Mons. Dario Edoardo Viganò, Prefect for the Secretariat for Communications of the Vatican, stated: “In 1960 the games in Rome marked a key moment for the experimentation in worldwide live broadcast of TV events which then became standard during an ecclesial event like the Vatican Council of 1963. Today we witness a papal event - the Mass of Christmas Eve -, which stimulates and precedes the wider adoption 8K technology. It is curious, but history is like this: important occasions often have the ability to foreshadow modernity. This 8K trial we will carry out at the Vatican in collaboration with Sony is fully part of the mission of the Holy See's Secretariat for Communication. The test, thanks to the commitment of the Vatican Media team, allows for the production of high quality documentary material for our archives and therefore for the historians of tomorrow. It also follows the path traced by the Vatican media reform called for by Pope Francis, who continually urges us to adapt our communication system to the needs of the contemporary digital environment to better support the delivery of messages to the four corners of the planet.”

"At Sony, we’re always finding new ways to empower amazing storytelling and help our customers meet the demand for stunning capture in 4K. Sony is supportive of Vatican Media and their mission to deliver the highest quality images to their audiences. Our 8K sensor technology offers the capability to capture for 4K production and is a leap forward in imaging technology. This 8K test, supported by our engineers and technical support teams, will push the boundaries of image innovation, as well as pursuing flexibility and creativity in capturing for today’s 4K productions” , commented Richard Scott, Head of Media Solutions, Sony Professional Solutions Europe.

"While 4K production has become the norm for high end productions, the roadmap for 8K still requires investigation, but Sony and Vatican Media have always worked together to pioneer and test new technologies and formats in their infancy,” commented Benito Mari, Country Sales Manager Media Solutions, Sony Professional Solutions”.

On December 24th the Christmas Eve Mass, presided by Pope Francis in St. Peter's Basilica, was broadcasted live via satellite in Ultra HD on Rai 4K on channel 210 of the Tivùsat free satellite platform. This initiative was in collaboration with Eutelsat, Globecast, Rai and Sony Professional.

The event marks the international debut of Vatican Media, the new brand that identifies all of the Vatican’s media productions.

A world-class team made up of Eutelsat, Globecast, Rai, Sony and Tivùsat provided its resources and technological capabilities to bring the celebration directly into Italians' homes with the highest quality of images through Eutelsat's HOTBIRD satellite. The event was broadcast simultaneously on Rai1 and on Rai1 HD through digital terrestrial and satellite, as well as globally through the usual circuit used by the Vatican.