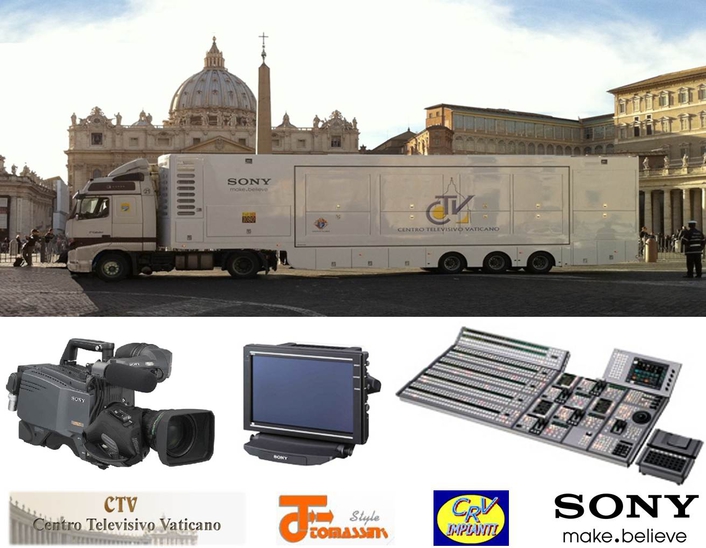 Sony Professional's HD mobile unit delivered to Vatican Television Center
Since 1983, CTV has broadcast the Pope's pastoral ministry and other activities of the Holy See, each year covering about 200 events from inside the Vatican as well as the Pope's travels in Italy and abroad. Events of such importance need the support of extremely reliable technology where quality and versatility are guaranteed. CTV footage is picked up by international broadcasters, news agencies and documentary producers around the world, all of which will now have more access to superior high-quality content. To cope with this demand an OB van with full HD capability was delivered to the Vatican in November 2010.

The HD outside broadcast van Sony has created for CTV is over 45 feet long, 8 feet wide and 13 feet high, and features a double expandable layout for extra space in the production zones. Its four operating areas include the audio room, equipment room, primary and secondary production control with VTR and camera control. Primary production control is equipped with an MVS-8000G video mixer for maximum flexibility and integration in the handling of incoming and outgoing signals, and sixteen HDC-1400 series HD fiber optic video cameras for optimum performance and ergonomics.

The cameras are fitted with innovative 7-inch OLED studio viewfinders capable of delivering outstanding colours and luminosity. The cabling system in the van can accommodate up to 24 cameras.

All of the platforms are full high definition and ready for future 3D applications. The system can also handle video and audio signals in different formats and convert them into multiple standards.

Federico Lombardi, director general of Vatican Television Center, commented: "The long-standing partnership between CTV and Sony, which has grown with our investment of this OB van, is strategically important to us. By staying at the forefront of television technology, Sony ensures that CTV remains current now and in the future, allowing us to continue offering the highest quality service to television networks around the world. It goes without saying that events at the Vatican and the activities of the Holy Father are matters of exceeding interest to a vast international audience."

"The design and development of the van was a deeply satisfying experience in both human and technical terms," added Stefano D'Agostini, CTV's technical director. "The Sony team and CTV achieved a truly unique level of harmony during this project. The outcome was like a ‘made-to-measure suit’ by a master tailor. The particular needs of CTV were perfectly met by Sony's new high-definition van."

"The mission of Sony Professional is to pinpoint the business needs of clients and offer technological solutions that aim for production efficiency by optimising investments," emphasised Gildas Pelliet, chairman and CEO of Sony Italia. "The relationship between Sony and CTV is based on a close partnership developed over time, that we are sure will continue into the future. We are proud to have helped build a state-of-the-art, full HD mobile studio that is fully prepared for tomorrow, designed with innovative, reliable solutions that will raise CTV's production standards to the highest levels."

Benito Manlio Mari, head of Sony Italia's media solutions business, commented: "We have worked with Vatican Television Center for more than 20 years and are proud to be partners with a broadcaster renowned around the world for its extremely high-quality productions. We have built a joint project team with CTV so we can best integrate the expertise of both parties and develop solutions using the best technology on the market."

The body of the van was designed and produced in collaboration with Tomassini Style, while the A/V system was wired with CRV Impianti di Luigi Nicola Carvelli.

Vatican Television currently broadcasts around 200 live programs every year, including celebrations in St. Peter's Square, the Pope's recitation of the Angelus and his accompanying talks, and some live concerts.

The Knights of Columbus covered nearly a quarter of the $6 million cost for the new broadcasting van. Carl Anderson, the fraternal order's Supreme Knight, said he was grateful for the opportunity to help the Vatican broadcast the Gospel message. Citing the example of Jesus' own public speeches and the journeys of the apostles, he said there was “an unbroken Catholic tradition of bringing Christ to the greatest number of people possible, in the clearest manner available.”

High-definition television, Anderson said, is becoming a important forum for ideas and culture. He observed that while technology and social conditions change, and lead the Church to propose its message in new ways, the message itself is unchanging.

“It is our hope that this new technology in the service of evangelization will serve as a conduit,” he announced, “bringing to every corner of the earth the word of God ... in the most technologically clear and advanced manner that has ever been possible, and transforming the lives of countless people.”

Archbishop Claudio M. Celli, president of the Pontifical Council for Social Communications, reported that his office had not yet chosen a name for the new high-definition broadcasting service.

But he was effusive about the technology's potential, calling the update “the latest act … to create frank, open dialogue” on a “technologically sophisticated plane.” Archbishop Celli also mentioned a possible future project, geared toward consolidating multiple Vatican news sources into one.

After a training and start-up phase, during which Sony Professional provided top-notch assistance wherever needed, the new mobile unit was up and running in December 2010.