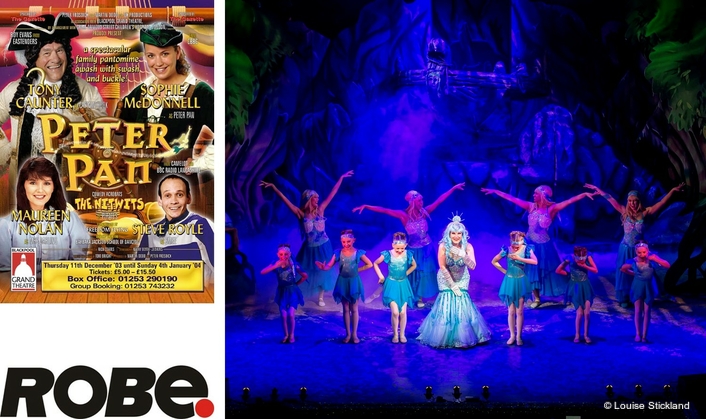 Panto (pantomime) season in the UK and Ireland brought another crop of side-splitting hilarity and slapstick to stages up and down the countries, with gags, double entendres and innuendo flying faster than foam pies from a Super Soaker Zipfire, delivered by a range of crazy eccentric gender-defying characters … following – sometimes vaguely – classic folk tale narratives. One of the most exciting and high-profile presentations for this season was UK Productions’ Peter Pan at Blackpool Grand Theatre, directed by Anthony Williams and lit by Andy Webb.

Andy has a lot of experience in lighting the trippy, hallucinogenic world of pantos, which requires some classic theatre treatments, but also leaving room for experimentalism and fun. He has also worked at the Grand Theatre before, a stunning original Frank Matcham designed house – and now a Grade II Listed building – dating back to 1894 that is exceptionally tight for space when staging complex contemporary productions.

Andy explained how he wanted to light Peter Pan differently from a standard panto as the storyline “had the latitude for us to be much more ‘musical’ in approach”. His idea was to emphasise and build up the characters and locational compositions rather than relying just on the slapstick - which was there, but more understated and thoughtful that you’d expect!

Consequently, lighting went the same way, offering a lot more multi-layered cues, depth and texturing than might be found in traditional panto. Also, being Peter Pan, there was the great dramatic vehicle of flying to add excitement to the performance!

Three Foy flying tracks over the stage and one in the auditorium above the audience additionally affected how Andy was able to light. Making those wires disappear was a priority so the characters convincingly looked like they were really flying.

Robe T1s were used for a lot of texturing and scenic gobo work like creating window frames and shimmering magic effects utilising the animation wheels. “Almost every scene had some sort of movement effect – subtle or obvious – from the T1s, and it’s been great being able to use their functionality to assist this process,” he stated. 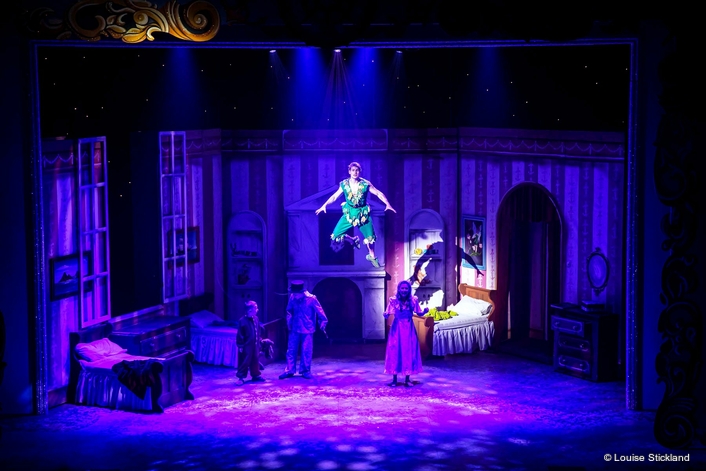 The show featured a couple of big bold audience interactive parts, several iconic rock ‘n’ roll moments in the second half, and one of the jokes was even related to lighting as Captain Hook air guitared with a PAR can during the “One Vision” Queen medley.

The core rig was built around 12 x Robe T1 Profiles for the hard-edged lights, ten over the stage on LX Bars 1, 2 and 3, with two either side of the pros arch, crossing to light the stage apron.

This was the first time Andy’s used this particular fixture on one of his own shows. “The flexibility of the T1s definitely allowed me to push the envelope further,” he enthused.

Andy and everyone else on the production team plus the house crew were impressed by the proper silent running of the T1.

Apart from that, he “loves” the smooth and refined colour mixing and that this gave the scope to mix in plenty of pastel and more understated colours that are often absent from panto – known for its psychedelic spectrum of primaries!

Twelve Spiiders were distributed equally across LX bars 1, 2 and 3 for a nice even stage wash. “They work perfectly in tandem with the T1s,” Andy commented. 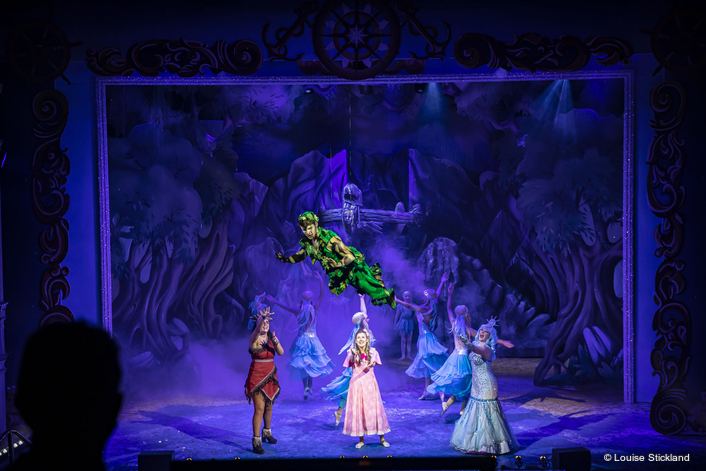 Six ParFect 150s on LX3 were rigged either side of centre creating two 3-finger ACL-style fans – particularly effective for scenes where there is a set centrepiece like the treehouse in the Lost Boys camp scene, and they are also good for more minimalist effects like sunlight shooting across the tree branches.

Twenty ParFect 100s were scattered around the rig, mainly on the side booms and ladders, with a pair on the end of each LX bar for illuminating the set borders and legs, with six on the FOH bars to light the production’s false pros.

Two DL4S Profiles were rigged in the upper balcony positions, used for texturing the front cloths and for projected and animated effects like clouds onto the skyline for the city scenes.

Two CycFX 8 moving LED battens were utilised to up-light the house pros arch and they also flipped out into the audience when needed as blinders, while a pair of ParFect S1 2.7K (warm) and 6.0K (cold) whites cut in from the downstage booms, replacing what would traditionally have been a fresnel position, chosen for their high-quality even LED wash characteristics.

In addition to the 50 or so moving and ‘intelligent’ Robe lights which all worked extremely hard and were supplied by Cambridge based rental company CEG, Andy hooked into a selection of Blackpool Grand’s house rig generics – Source Four Profiles, PARs and fresnels.

Over 300 lighting cues were programmed onto the Avolites Tiger Touch II console operated by the house crew for the run of shows which ended on January 5th 2020.

Andy’s biggest challenge this year was having just 17 hours of programming and tech time on site, with no previews and straight into opening night. Knowing the kit and the venue with the optimum positions etc., all helped enormously to deliver a show to the standards required. 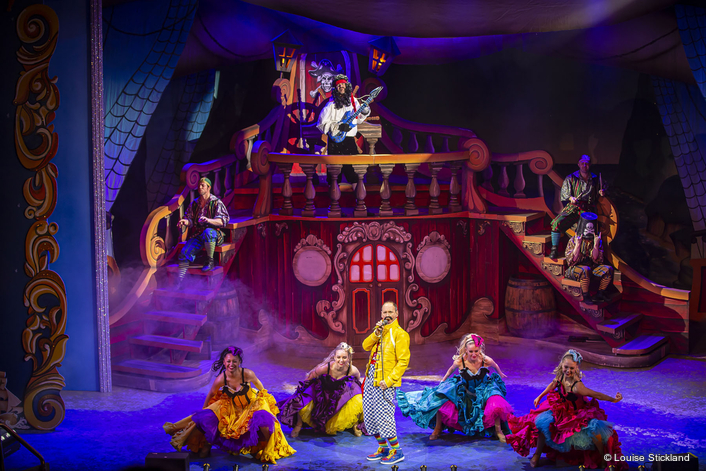 “As a panto lighting designer, you must be able to react quickly, think on your feet and often totally out-of-the-box and beyond normal comfort zones. Having an adaptable lighting rig like this to hand is essential to delivering a show to the best standards,” he commented.

The most difficult element to light was the auditorium flying … with 90% of the rig being concentrated onstage, so the two FOH T1s and the DL4S profiles combined worked flat-out during these scenes. Serious time was spent programming multiple cues to follow Peter Pan around, and with the T1’s zooming out so wide, Andy was also able to use some of the fixtures on LX1 without blinding the audience!

Andy recalls his delight on opening night hearing one young audience member declare “OMG he’s flying!” fully believing the optical magic as Peter Pan zipped out into the house for the first time!

“That’s what we do it for! One comment like that makes all the hard work, stress, long hours – not to mention some great teamwork and camaraderie – so worthwhile!”