The unmistakable buzz of Manchester International Festival (MIF) kicked off with a choreographed bell ringing art piece, BELLS FOR PEACE, created by Yoko Ono at Cathedral Gardens in the heart of the city

tube uk provided a clear, precise quadrophonic sound system for this very special work, commissioned by MIF19, to ensure that the multiple layers and intricacies of the sonic impressions were heard with optimum clarity.

Yoko Ono, appearing on a giant video screen during the event, gave instructions to the thousands of people who had gathered to join in a mass bell ringing with handbells that had been issued to them on arrival. This was accompanied by a soundscape by composer and sound designer Max Ringham and three large tuned bells rigged in custom towers dotted around the event site. 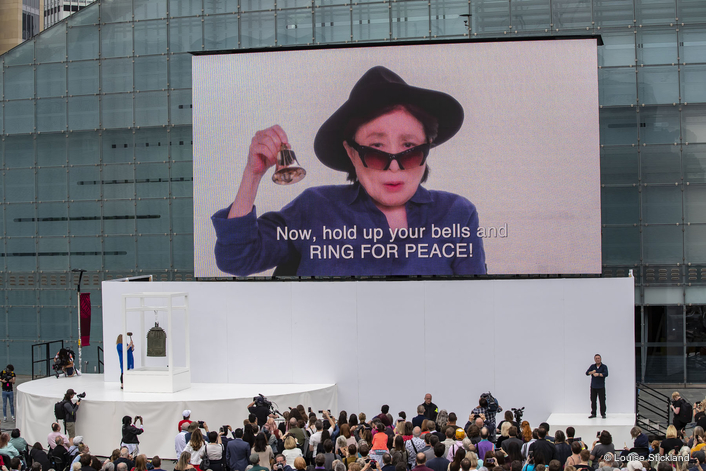 This beautiful cacophony of bells was joined by impressive chorus-like peals from the powerful baritone bells of the adjacent Manchester Cathedral.

tube’s Melvyn Coote and his team relish working with MIF, and the many innovative, different and interesting sonic opportunities it offers where their audio geekery and ability to think – and hear – laterally can provide incredible solutions! 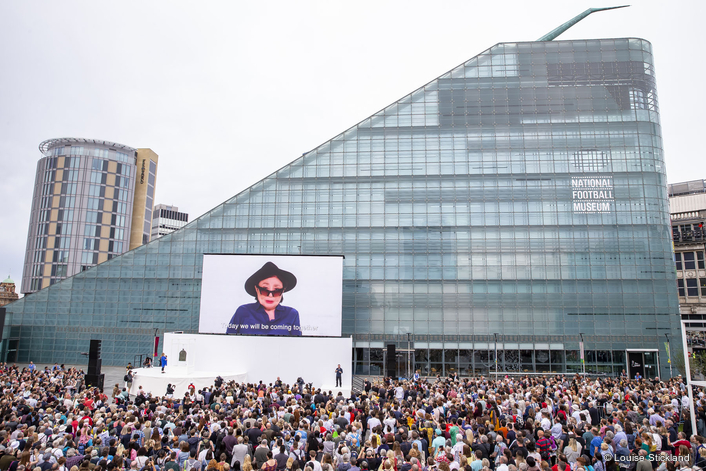 While this event was relatively straightforward in terms of sound system design, working with an artist like Yoko Ono on something as unique as this, was “demanding, exciting and inspirational,” stated Melvyn.

Melvyn specified a d&b sound system to cover Cathedral Gardens, comprising a left and right system in front of the stage with four stacks of surround sound to create the immersive quad effect across the designated area. 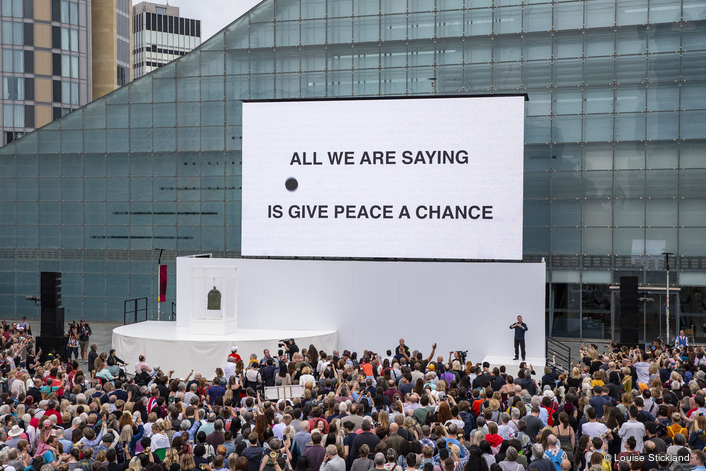 The playback system was a QLab 4, with 12 channels running out of that to a Yamaha CL5 console, with two RIO 3224 stageboxes for the PA and several broadcasting feeds, as the event was live streamed by several media platforms. Melvyn uses QLab as it is the best solution for dealing with the details of multilayered compositions.

tube spec’d Sennheiser SK5212 series for the presenter mics onstage, complete with brand new DPA 6066 headset mics - they have recently invested in 50 of these, among the first in the UK to do so. Like many, they have enjoyed great success with the 4066s especially in the corporate and theatre world. 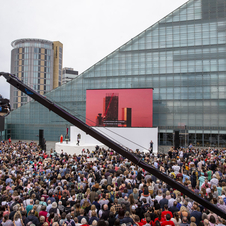 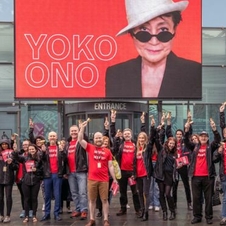 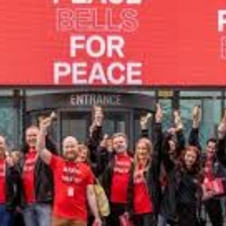 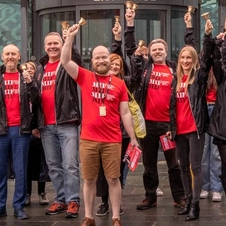 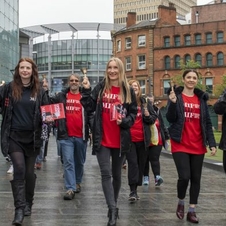 They provided four Sennheiser SKM5200 handhelds for the hosts and three for mixing the tuned bells in the towers, which were fitted with condenser heads, chosen for their clarity and detail.

The video content was synched to the music track, so the timecode was sent from QLab to the video servers and that triggered the screen content.

The tube team ensured that the PA made minimal impact on site, and while there was no disguising the need for black boxes, the stacks were kept neat and streamlined.

The front left and right arrays were ground stacked and made up from 10 x d&b V8s, four V12s, four V-Subs and four B2’s, all running off three D80 amps.

The four surround stacks were located in each corner of the site, made up from (in total) 16 x Y8s, eight Q-SUBS and four B2’s and powered by 8 x D12s.

While this was carefully calculated to deliver perfect acoustics for the Cathedral Gardens site, improvisation and luck – in levels and directionally - were involved when the voluminous church bells joined the performance, but this played out almost perfectly in terms of presence and having an impact. 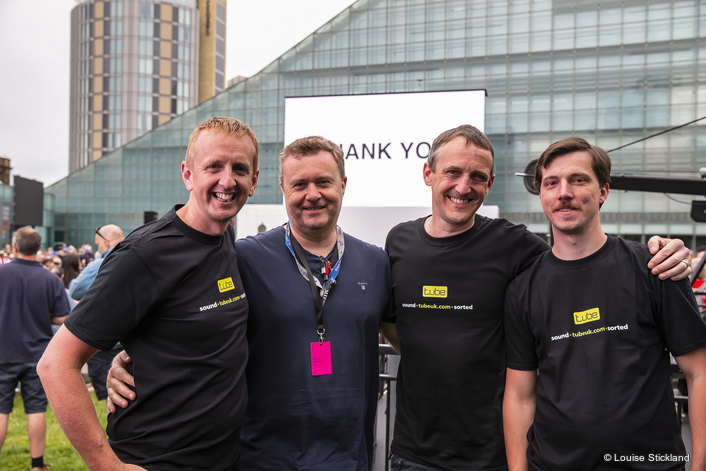 It brought an ephemeral highlight to an extremely emotionally compelling and ultimately uplifting and highly inclusive collaboration.

The FOH operator was Gareth Davies and tube’s techs were Darren McMahon and Ashley Burrage. Melvin was head of sound and coordinated this and the many other shows that tube is servicing throughout MIF19, in a major logistical and technical operation with challenges – and nimble responses – that keeps the whole company extremely busy through the periods and beforehand with all the prep.

In addition to BELLS FOR PEACE, tube provided sonic solutions and sound systems and crew for 18 major shows in and around Manchester through the duration of the Festival, plus numerous smaller ones, a major undertaking for the locally-based company “that we are very proud to be a part of! We love all the challenges and the chance to work on some amazing shows with highly creative people,” confirms Melvyn.

On the opening weekend alone tube was active in 20 different venues and performances which were enjoyed by between 10-12,000 people a day; from art, discussions and debates to staged spectaculars like BELLS FOR PEACE.

That same first weekend, tube also supplied full audio to a 4000-delegate conference at Manchester Central presented by Maharajji Prem Rawat who also spoke about the global importance of peace.