‘What if Women Ruled the World?’ was created by Yael Bartana with a team including British playwright Abi Morgan, Royal Court Artistic Director Vicky Featherstone and the set was designed by Saygel and Schreiber with lighting by Jackie Shemish

Audio specialist tube uk has invested in a new Sennheiser D6000 radio mic system … which debuted on the world premiere of Israeli artist Yael Bartana’s compelling live performance experiment ‘What if Women Ruled the World?’, which played for four nights at Mayfield depot at the 2017 Manchester International Festival (MIF).

With a stark Kubrickesque Dr Strangelove post-apocalyptic war room setting in the raw, vast and long-derelict Mayfield depot, historically the aorta of a thriving train station serving the city, a professional cast was joined by a group of female experts – scientists, activists, politicians, thinkers – to confront and solve a global nuclear emergency … as the clock ticks.

As this incisive and insightful work was also multi-track recorded each night, potentially for a future film project, tube’s Melvyn Coote decided the time was right to purchase the new leading-edge radio technology from Sennheiser.

Sound for the piece was designed by Tel Aviv based Daniel Meir. 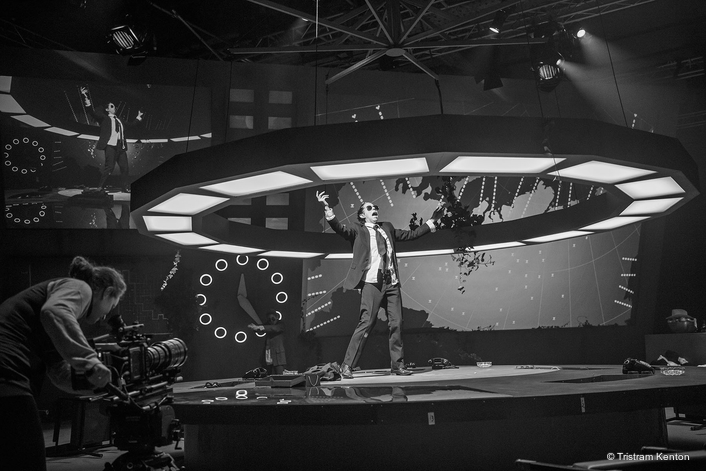 It was absolutely crucial – it needed to be crystal clear, totally realistic and also have warmth and fullness … in a huge barn-like, highly resonant – and hugely charismatic - environment. The conversations, debates and statements that provided the drama, comedy and intensity of the situation had to be heard.

As the set-up evolved in discussions with Daniel, well known for his work in the world of films and sonic art and performance, Melvyn ordered the 12 beltpack transmitters and 6 x D6000 dual receivers complete with all their infrastructure which he describes as “revolutionary” in terms of technology.

They were used on this production in conjunction with DPA4061 mic heads which were attached to the 10 performers. tube’s radio mic and RF tech for the show was Liam McShane.

The superlative RF performance of the D6000 is made possible by utilizing hardware selective RF filters at the RF input stage of the receiver.

It provides true equidistant frequency spacing - eliminating the need for complex frequency intermodulation calculations - by utilizing hardware isolators at the RF output stage of the transmitters. Using linear amplifiers, this reduces the intermodulation to being virtually non-existent. 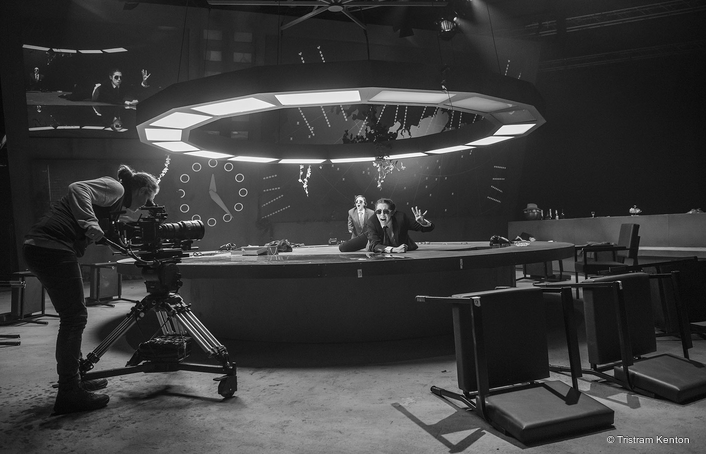 “Intermods and intermod spacing have long been issues in all types of live audio scenarios” explained Melvyn, “so this really IS a ground-breaking development for Sennheiser to make this available in their 6000 range. Transmitters can be placed exactly where they are needed, and we can now fit 21 transmitters into the same TV channel frequency space, that would previously only support 10 or 12”.

Converting the signal immediately to digital in the transmitter also enhances the overall quality and texture of the sound – particularly noticeable in spoken work scenarios. It removes the need to apply any compression technology, broadcasting full bandwidth audio from the mic into the receiver and throughout the rest of the system.

The D6000 also runs on rechargeable batteries. Melvyn reckons that tube consumes approximately 15,000 standard batteries a year running radio systems, so this will be hugely more environmentally conscious as well as cost-efficient.

The duration of each battery charge has also been maximized in design – around 5 hours is standard with this system - and a highly accurate indicator will tell the radio mic technician exactly the status of each beltpack. 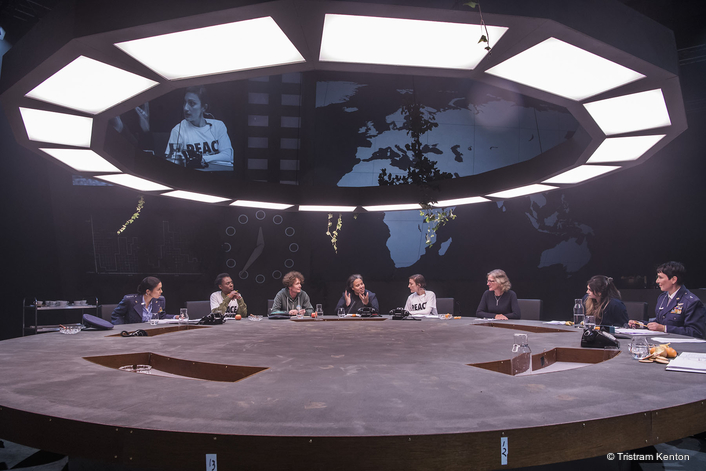 ‘What if Women Ruled The World’ was the first time that tube has worked in the Mayfield depot, which has been a regular venue for the constantly growing biennial MIF event since at least 2013, and remains otherwise unused.

Daniel Meir mixed the soundscape and effects, while tube’s Martin Wallace took care of all the mic mixing and integrating the two sonic elements – vocals and surround sound effects – using a Yamaha CL5 mixing console. This was running over Dante and fully integrated with the Sennheiser D6000 system.

The loudspeakers and amplifiers were all d&b, running AES digital links straight to the amps to keep the signal digital.

The challenge in the system design was delivering a clean and clear sound to the audience seated in a big, damp, dark and highly reverberant room … built in the early 1900s as a storage facility beneath the station!

Twelve d&b Y8 elements in a left-centre-right configuration were flown in front of the seating tribune, with a rear surround ring of E8s, plus E6 front fills, all run off d&b D80 amps. Under the stage one B2 and two Y-SUBs provided some serious low frequency atmospherics. 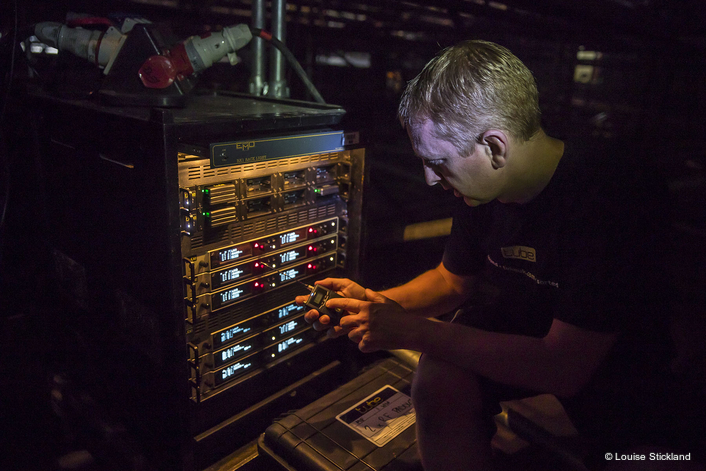 Along the long, shadowy entrance area were four E8s either side on scaff poles and four Y-SUBS a side on the floor, creating a sinister surround experience as the audience entered the space.

Everyone involved in the production has been impressed with the sound.

Daniel, whose dynamic career includes designing sound for documentary and feature films and interactive media installations as well as many creative art projects, has really enjoyed working with the tube team on the show, commenting, “They are a great team of people - very knowledgeable and the system has been excellent to work with … it’s delivered everything we needed”.

For Melvyn, “It’s been an incredible experience working on this thought-provoking show and helping to realise Daniel’s sonic creativity and Yael Bartana’s amazing vision. I am extremely pleased with the Sennheiser system. The success and acclaim garnered by the production has definitely underlined that it was the right decision”.

‘What if Women Ruled the World?’ was created by Yael Bartana with a team including British playwright Abi Morgan, Royal Court Artistic Director Vicky Featherstone and the set was designed by Saygel and Schreiber with lighting by Jackie Shemish. It played for four nights at Mayfield and was commissioned and produced by Manchester International Festival, European Capital of Culture Aarhus 2017 and Volksbühne Berlin. 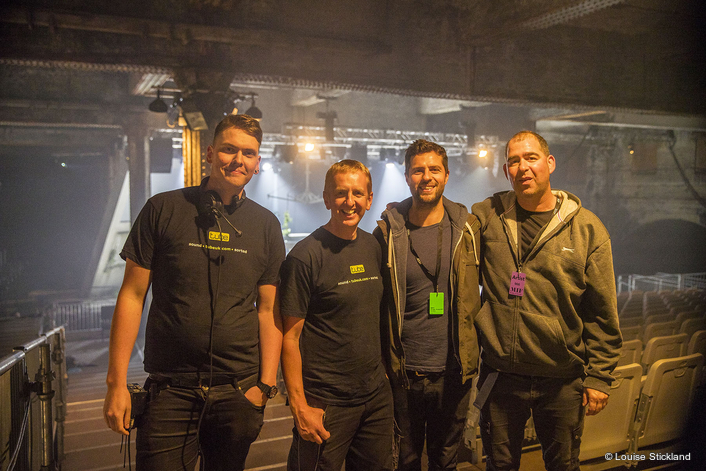 Manchester and London based tube is involved with a wide range of art, performance and music projects and, over the course of the MIF17, has supplied audio to around 30 productions, performances, installations and interventions.

What if Women Ruled the World
Sennheiser
tube UK