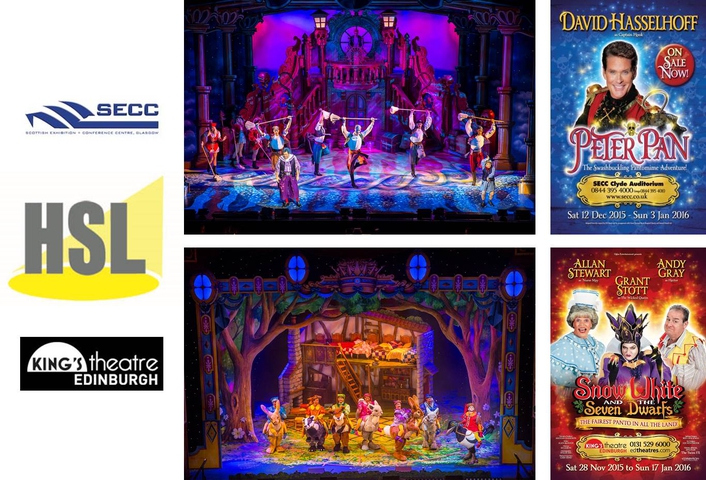 It has been another glorious panto season for HSL, supplying lighting for over 30 productions all across the UK predominately for premier panto producer, Qdos during the 2015 / 16 festive period, plus rigging and a Kinesys automation system for the largest show, Peter Pan at the 3000 seater Clyde Auditorium in Glasgow.

Nineteen trucks packed with kit left HSL’s HQ in Blackburn, Lancashire – with Swansea and Cardiff sharing transport - loaded up with a combination of moving lights, LED fixtures, strobes, follow spots and generic luminaires, together with cabling, power distribution, control and effects and atmosphere generators. Equipment flew out the door to keep pace of the barrage of excellent slapstick, innuendo and lavatorial one-liners bringing side-splitting humour and entertainment to thousands.

The first truck was loaded up at HSL on 13th November … and the most hectic weekend saw 11 trucks filled and dispatched over 3 days.

HSL’s team of Qdos panto project managers was headed up by Jordan Hanson, who looked after eight shows, Sean McGlone who co-ordinated seven productions, Emma Nolan and Andy Chatburn who handled a pair and John Slevin, who masterminded Glasgow.

They dealt with 14 different LDs in total, including Ben Cracknell and Matt Clutterham, who each designed four glittering productions.

The art of lighting panto requires a careful fusion of precise key lighting, crazy trippy colouring and dramatic effects to compliment the onstage action which popular songs of the moment, incisive political satire, slick fast-fire dialogue, glitz, glamour and visual extravagance … together with some touches of pure traditional theatrical magic … continue to enthral wide audiences. The Qdos shows in particular … are known for their high production values.

Glasgow once again hosted one of the highest profile shows of the host of Qdos productions this year with “Peter Pan” starring David Hasselhoff and The Krankies, with a lively and colourful lighting design by Tim Oliver.

HSL supplied trussing and rigging for this one – a bare stage arena style venue -  which started with the installation of  a large mother grid from which sub-trusses, rigging and an extensive Kinesys automation system to create the flying system needed for all the LX and drapes bars. Also integrated into this were the Foyes performer flying tracks.

The lighting rig was spread across 5 overhead LX bars, an advance truss and assorted positions around the front circle balcony and the side pros booms, with the HSL supplied elements combined with a quantity of Source Four profiles from the house.

Seventy moving lights from a plethora of manufacturers were specified by Tim, all used to great effect, starting with 12 x Martin MAC Vipers, four on the circle front and the rest on different overhead bars which were used for most of the extensive gobo work and projecting animations onto the stage. 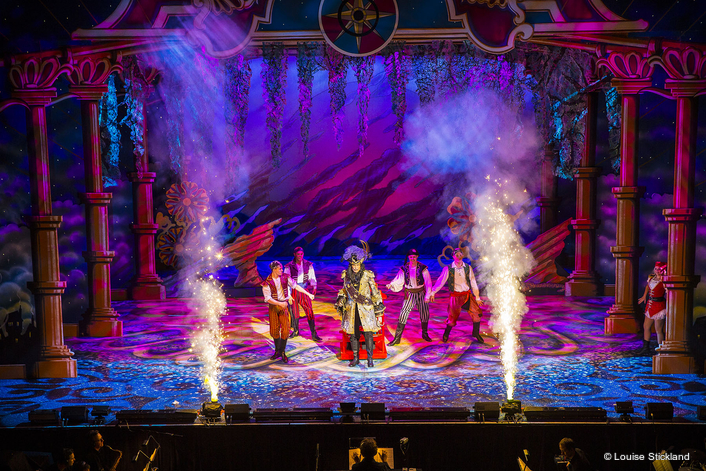 Eleven Robe MMX Spots  - some concealed in set pieces and on the floor, possible due to their small size – were also used for gobos and texturing and spotting, and 10 x Robe MMX WashBeams were perfect for picking up a lot of the high speed pick-ups and ‘local’ spotting. Two MAC 2K XBs on the front truss helped with coverage across the forestage area.

Twelve Clay Paky Sharpy Washes overhead and at the back were used for the quick zappy moments, while 10 x Philips SL WASH 350 LED units – two on the advanced bar and the rest on the overheads - lit the set portals and provided general LED illumination for the multiple cloths that dropped in and out throughout the performance.

Robe CitySkape LED floods with frost filters were spread out along the lip of the stage and utilised for front lights and to graze up the portal legs, while twenty-three i-Pix Satellites on LX2 picked out the tops of the portals.

PixelLine LED battens running across the front of the stage were used as blinders at various points together with two more units on LX2 that pointed directly downwards.

Robe CycFX8 moving LED battens at the back were used for colouring the upstage cloths and 9 x Philips Nitro strobes on LX Bars 2 and 3 were worked both as classic strobes and as powerful washes onto the forestage. 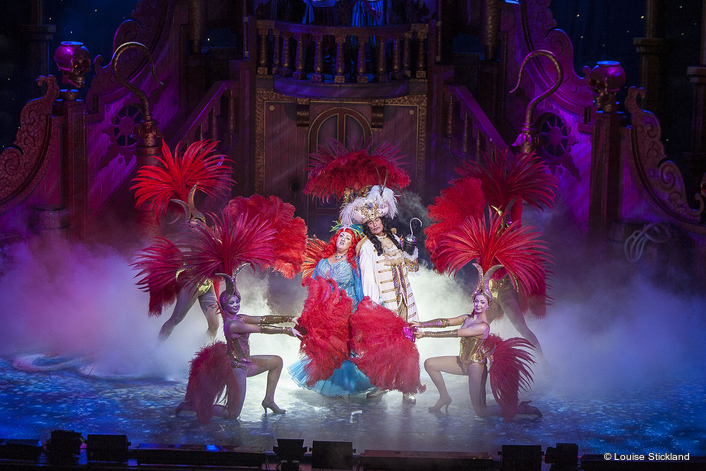 The portals also had a series of inbuilt LED practical lights and fibre curtains embedded in the legs that were controlled via the lighting console, and HSL supplied an upstage and a downstage starcloth to add more layers of sparkle.

All the lighting was programmed onto a grandMA2 light, with MA OnPC at the dimmers running in full tracking backup, and the show was operated for the run by Chief LX Gareth Smith, who tech’d the lights with Deputy LX Trix Banionyte.

On the east side of Scotland, lighting designer Ben Cracknell brought his vibrant magic touch to “Snow White and the Seven Dwarfs”, one of the longest running of this year’s Qdos productions, starring the superlative and hilarious panto trio of Allan Stewart, Grant Stott & Andy Gray.

Ben’s production LX Nick Mumford co-ordinated the kit list  and all the logistics with HSL, and on site, he, Ben and Ben’s programmer Alex Passmore worked alongside Kings Theatre’s head of lighting Stewart McGill and their LX crew to install the HSL kit which was combined with the theatre’s own lighting system. This was hung on their counterweight bars overstage and a number of other positions including pros booms and the front of the circle balcony.

Stewart has seen almost everything imaginable shoehorned into the Kings Theatre for pantos over the years, including six white Shetland ponies one year for Cinderella, and this year the special FX were a flying Reindeer and sleigh and a massive T-Rex animatronic, which, together with the substantial Dwarfs House truck occupied a large portion of the already tight side and backstage space.

The multiple scene changes were created with the assistance of numerous cloths flying in and out. 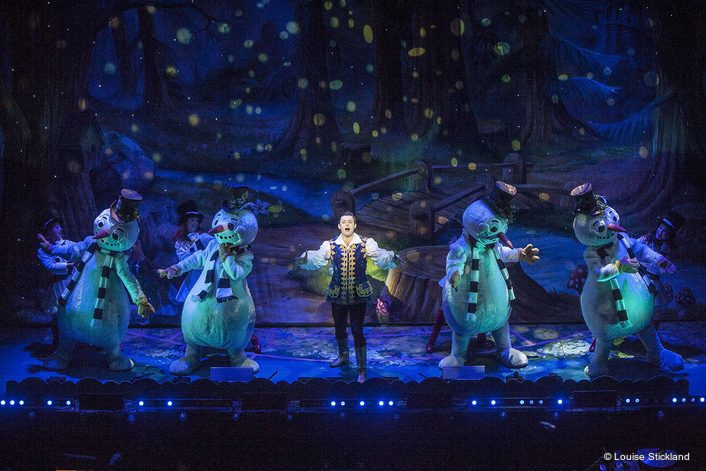 Four main LX bars were utilised for overhead lighting, all with A bars giving eight in total, plus the house flood bar at the back which is loaded with Chauvet COLORado Batten 144 LED units. The production also made the most of all the in-house FOH profiles and a splattering of house PARs and generics.

HSL supplied Vari*Lite V*L3500 Spots, with two rigged on the balcony rail and two either side of the pros. Sixteen Robe LEDWash 600s were split into fours and hung on each of the LX bars, used for all the general washes and 10 x Robe 600E Spots were rigged three on 3 of the bars with one in the centre of the upstage bar for spotting and specials.

That was it for moving lights! A great tribute to Ben’s imagination, Alex’s programming skills and the products themselves which were worked hard and used in a real ‘multi-purpose’ context.

Philips Showline eSTRIP 10 battens nestled along the front of the stage where they were highly visible and used for numerous effects including ‘dancing’ along to the music and the slapstick, and a couple of Atomic strobes kicked in at various times.

Smoke and haze was part of the HSL package along with four Chauvet Geyser vertical smoke machines, two on Bar 1A pointing downwards and two in the pit shooting upwards as the magic mirror appeared! Another Geyser LED smoke jet was ensconced in the cauldron, proving highly effective in setting the mood for Snow White’s evil step-mother to concoct the poisoned apple!

Two of HSL’s Robert Juliat Lancelot follow spots were installed for the run – manually humped up several flights of stairs – but well worth the effort as they worked brilliantly for highlighting artists.

This was all combined with around 50 house PARs and 50 profiles plus the upstage house LED flood bar, all controlled off their ETC Geo console by Stewart for the run. 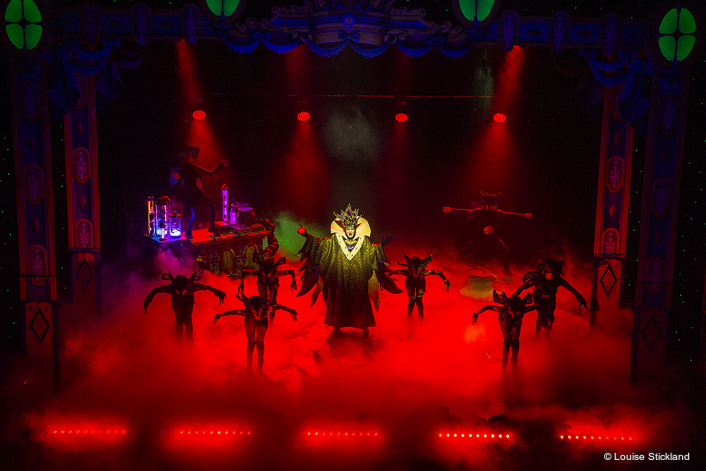 The majority of the gear returned to HSL the first week of January, with Edinburgh being the last to finish on 17th January.

Jordan comments, “It was a massive team effort by all of us which galvanised our communication skills and our aptitudes for logistics.

“The real challenge was amassing all the info from the various different LDs and production LX’ – around 40 people in total – about what was actually needed where and when. This huge amount of info had to be processed in time to order all the special elements like gobos and allow the time for these to be fitted into the relevant fixtures, liaising with the trucking and dispatch, etc.!

“It was quite a brain-teaser, but everyone worked hard to make it as smooth and efficient as possible. It was a great achievement, and we also enjoyed working with an excellent team from Qdos led by Mark Sherwood … on some properly world-class pantos”.