For the long-awaited inauguration of the Elbphilharmonie concert hall located on the harbour-side in Hamburg, a massive light and video setup was installed. It all culminated with a spectacular show in the evening of January 11. As a crucial part of this show, no less than 500 pcs. of P-5 and P-2 wash lights from SGM were applied.

Hamburg’s new concert hall is one of the largest and most acoustically advanced in the world. It is popularly nicknamed Elphi. The 108 metres/354 ft. tall building consist of two sections. The new glassy construction resembles a hoisted sail, water wave or quartz crystal, which is constructed on top of an old warehouse building. A terrace placed in middle, ties the new and the old sections together. This is where most of the P-5s were installed. Furthermore, all balconies on the upper part were also equipped with P-5s.

The overall concept was thought-out by the global agency, Jung von Matt. Their task was to visualise the concert taking place inside the opera house on the outside of the building in real-time. Jerry Appelt was the responsible Lighting Designer that ensured that the light was synchronized with the music and video content displayed on the bottom part of the building.

All lighting was supplied by PRG and their Account Manager for the event, Michael Casper, here explains why they chose to apply P-5s over other wash lights for this event: 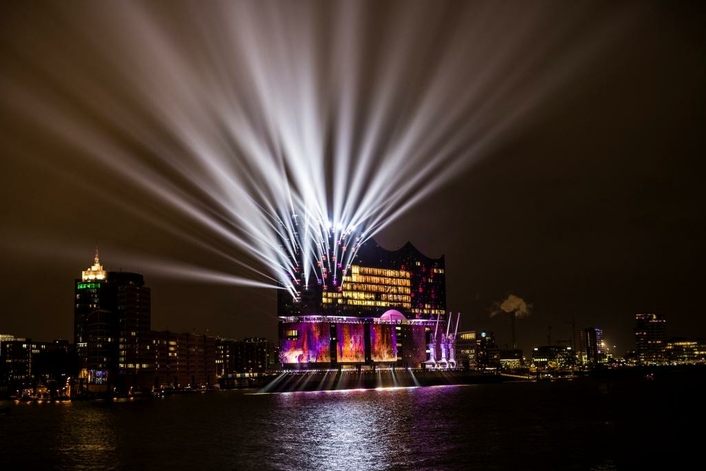 "They are water resistant, bright and reliable – that's why we have a lot of them. They absolutely live up to all our expectations. The role of the P-5s was to bathe the new part of the building in deeply saturated colors, changing dynamically in time with the music. They certainly delivered that - and even more.”
The result of all the different elements coming together as whole truly was a breathtaking experience.

About SGM
Originally founded in 1975, SGM has over 40 years of experience in designing and producing lighting technology. Highly specialized in LED and IP65-rated lighting solutions, SGM has embarked on a journey to become the world’s leading manufacturer of LED lighting.

While consolidating its position as an established player in entertainment lighting, SGM is intensifying its focus on architectural lighting and outdoor-rated lighting solutions with heavy investments in R&D. As a result, the spring of 2016 marked the birth of a whole new range of IP66-rated lighting fixtures for permanent outdoor installation.