CSR Lighting: An SGM Head for all Occasions 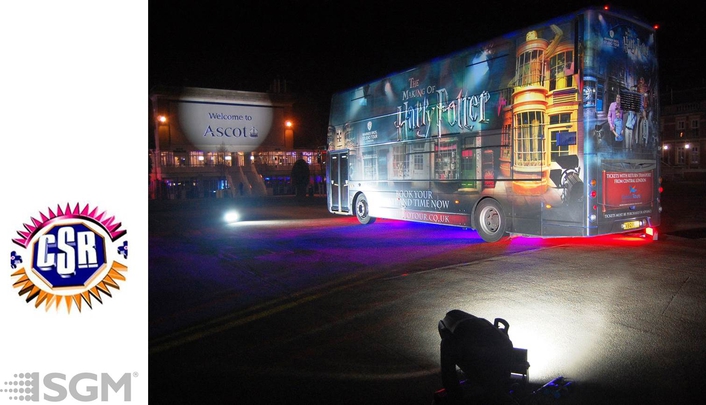 CSR’s G-Spot in use with Frontline who themed the Ascot Racecourse Pavilion and Grandstand recently, and lit the bus
When Gary Willn reviewed the varied roster of work being serviced by his long running company, CSR Lighting, he sensed that the versatility of SGM’s LED portfolio would not only provide unique solutions for him, but also his many dry hire customers.

The Nuneaton-based company opened their account by ordering a batch of P-5 LED washlights. “I have an enjoyment of outdoor projects and SGM’s IP-rated products are wonderful — taking the industry to the next level,” he says.

Aside from providing RGBW colour washes of building exteriors he has also found great application of the fixture for permanent side stage washes on theatre shows, using the white light through the 43° lens. “On the other hand we also undertake a lot of corporate work and for these a complete colour mix, or mix of pastels and whites, is essential.”

He said that in the regular ‘Chance 2 Dance’ student shows staged in theatres across the UK, they have systematically replaced the larger moving lights with the P-5s.

But it was for an event, spread over eight acres of parkland, that Gary decided to increase his SGM inventory. “I bought another six P-5s and at the same time ordered six of the Q-7 [combined flood, blinder and strobe]. I was trying to find an alternative for a cyc wash and light bar for use in different places. And this solved the problem.”

While CSR Lighting has largely been using the Q-7s as a wash, for dry hire customers it is the strobing function which is proving popular.  “The Q-7s are also extremely popular for exhibition work because of its colour temperature; you can set it up ahead and it will hold the colour full on while its low power reduces the cost of electricity.” The warm white and blue are particularly popular for car shows, he says.

CSR then purchased a third fixture, adding the IP65-rated SGM G-Spot to its fleet, initially because he had some E-sized gobos which were compatible. “The great thing about G-Spot’s use outdoors is because it is a sealed unit we don’t need a protective dome, which means we can achieve a spot-on focus without having to do so through the dome. It can pour with rain — without troubling the G-Spot at all.

“On top of that it has a great light output from a low power source and I don’t have to clean it when it comes back, other than externally; it’s winning new business because it’s answering problems people didn’t even know they had!” In fact, since their initial purchase, CSR Lighting have added a further four of the award-winning G-Spot.

One notable high profile show was the Birmingham Freshers Ball where both G-Spots and P-5s were used. “The clients were blown away by the rich colours of the P-5. They tested it against 700W discharge fixtures and found it to be way brighter.

“As for the Q-7 I am chuffed to bits because of the different modes in which it can be used, whereas G-Spot has surprisedeveryone.”