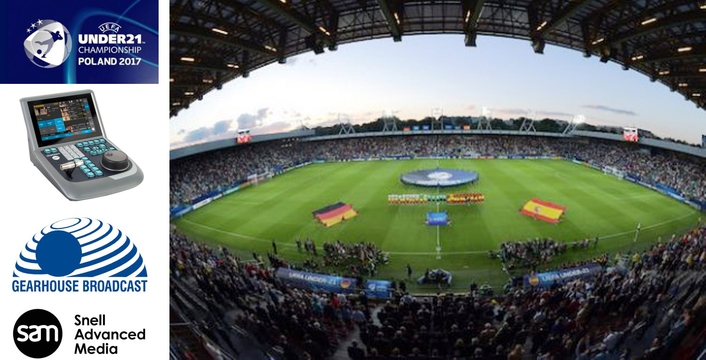 UEFA has delivered the world’s first uncompressed UHD remote production trial during the 2017 UEFA European Under-21 Championship Final, held in Poland in June, in collaboration with Snell Advanced Media (SAM) and system’s integrator, Gearhouse Broadcast. During the Championship final game, the IP system – which replaced a traditional OB set up - delivered live camera signals from the Marshal Józef Piłsudski Stadium in Krakow, Poland to UEFA who were located at BT Sport’s facility at the Queen Elizabeth Olympic Park in London, around 1600km away, ready for live edit and playout.

On the trial, André Nel, UEFA’s Senior Broadcast Engineering Manager, said, “This successful test represents a major milestone for UEFA as we continue to innovate and explore remote production solutions ahead of the incredible challenges that future finals and UEFA EURO 2020 – with matches played in 13 different countries – will present.”

Working closely with Gearhouse Broadcast, to ensure the system design would result in smooth integration with the rest of the workflow, SAM delivered to UEFA a complete Proof of Concept (POC) IP-based remote production system.

Live UHD signals from five Sony HDC 4300 4K/HD cameras at the stadium were sent via a specially installed and commissioned pair of fully redundant 100GB Ethernet links. The signal was delivered to a production control room provided by BT Sport in London with a Director, Vision Mixer, PA, Graphics, Audio Supervisor, LiveTouch operator and Producer. The SAM LiveTouch server was used in a 2 in/2 out UHD configuration to play UHD replays, packages and graphics.

Robert Szabó-Rowe, EVP and General Manager, Live Production and Infrastructure at SAM, added, “This project is a real milestone for remote production, and we are very proud to be part of it. It is the first time that uncompressed UHD signals have been delivered over such a distance with ultra-low latency. The production team didn’t see any perceived difference to sitting in an OB truck on location.”

UEFA – the Union of European Football Associations – is the governing body of European football. It is the umbrella organisation for 55 national football associations across Europe. Amongst UEFA’s priorities are to promote the spirit of football and fair play, while also ensuring there is a zero-tolerance towards racism and discrimination. UEFA is in regular contact with all its stakeholders involved in European football and offers support and safeguards its member associations for the overall well-being of the game.

SAM has the vision to deliver business-transforming solutions across the media production ecosystem. Our future-ready systems enable broadcasters, content owners and service providers to evolve their business models to succeed in the consumer-driven era. We understand that it’s not only about the future – to get there, today’s needs are also paramount; our smart, agile technology maximizes efficiency and productivity in today’s rapidly changing media landscape