Mobile production at the highest level 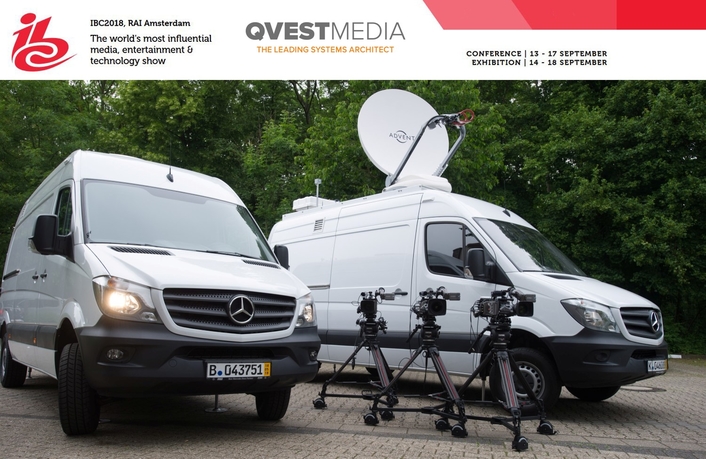 Qvest Media, one of the world’s leading systems architects and ICT integrators for broadcast and media technology, has designed, developed and equipped an OB van and a DSNG vehicle with advanced 4K/UHD broadcast technology for the Berlin-based international news agency Ruptly. One of the first missions for the two vehicles was the 2018 World Cup in Russia.

Qvest Media solved the special customer requirement of being able to drive both special vehicles with a normal car driver’s licence by employing an innovative body and lightweight construction method, which was developed in close cooperation with its partner Carrosserie Akkermans. Both vans are based on a Mercedes Sprinter and weigh less than the maximum of 3.5 tonnes without making any concessions in terms of fully-featured technical equipment. As a result, even 4K/UHD productions can be realised at a high quality level using the compact fleet. The crew has three acquisition sets consisting of ARRI’s Amira UHD cameras, CueScript teleprompters for the presenters and various Canon lenses.

In addition to live coverage of news, events and sports, this also enables cine-look productions of reports and documentaries. Beside a 4K/UHD video mixer from For-A, the vans also feature a Yamaha audio mixer and a 4K ingest and playout server from AJA. This way, a balanced cost/benefit ratio is ensured without having to leave out any of the required features.

“This project shows once again that a high level of technical quality can be achieved with competitive budgets even when space is at a premium”, says Norman Tettenborn, Principal at Qvest Media, adding: “No outside broadcast is like any other. So versatility always plays a central role in the design of OB vehicles.”

Additionally, the OB van and DSNG can be coupled to form one integrated production unit. This is made possible by the integrated real-time network MediorNet from Riedel. The decentralised router distributes audio and video data without delay in the workflow between the OB van, DSNG van and the integrated stageboxes; the live feed is broadcast via the fully redundant NewSwift uplink from Vislink. 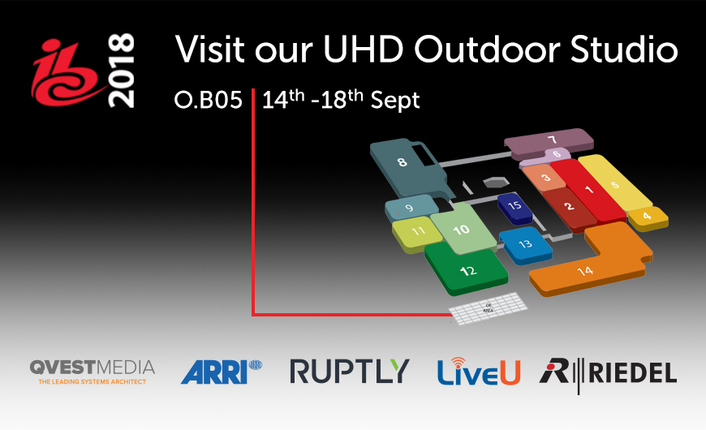 Thanks to a generator that can power both vehicles, the Ruptly mobile production team can broadcast live from almost any location quickly and independently.

Ahmet Cakan, CTO of Ruptly: “Qvest Media has done an amazing job. The vans passed the baptism of fire during the World Cup in Russia without a hitch and made our reporting considerably easier.”

Together with Qvest Media and other partners, Ruptly will present the two vehicles at this year’s IBC in Amsterdam (stand 0.B05).

About Ruptly
Ruptly is an award-winning global multimedia agency headquartered in Berlin, Germany.
Launched in 2013, Ruptly provides real-time and archive visual news content to media brands worldwide, from large broadcast networks to online content providers. Ruptly offers readily-edited video packages through video on demand, operational facilities through broadcast services and direct access to global events via live streaming. From 360° videos of spacewalks, to aerial views of current events by drones, Ruptly pushes the boundaries of video journalism, using the latest in broadcast and newsgathering technology. The agency won the titles of “Best B2B News Site” in 2017 and “Commercial Team of the Year” in 2018 by the prestigious Drum Online Media Awards.

About Qvest Media
Qvest Media is a world-leading systems architect and ICT integrator in the fields of broadcasting and media technology, specialising in the television, media and telecommunications industries. The company, headquartered in Cologne, has additional locations in Europe, Middle East and Southeast Asia. With a powerful spectrum of services consisting of Consulting & Development, Systems Integration and Service & Support, Qvest Media offers 360° expertise in the design, development, implementation and operational support of media technology infrastructures. With its business unit Managed Technology, Qvest Media supports media organisations along their entire digital transformation process by covering everything from technology infrastructures to services and technical operations offered within streamlined and future-oriented payment models. In addition, Qvest Media ranks among Europe’s largest trade and distribution houses for technology in the fields of Professional AV, IT and Broadcast with a commercial portfolio of around 250,000 products as well as partnerships with nearly all major manufactures from the media and IT industries. Qvest Media is also one of the biggest suppliers of dry-hire equipment and systems solutions for live broadcasting of events, sports and entertainment. Today, the customer base includes eminent international broadcasters, telco providers and media networks such as ARD and ZDF, Sky, RTL, Al Arab, SRG, Al Jazeera, tpc switzerland ag, Mediacorp, beIN SPORTS, Dubai Media Incorporated, SES ASTRA, Etisalat, Turner Broadcasting, etc.