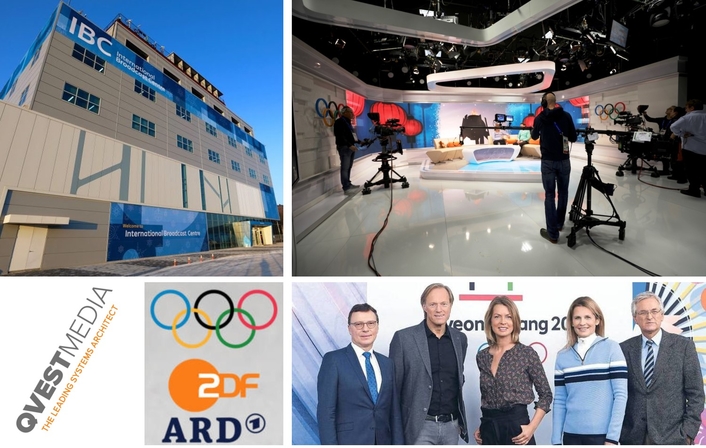 Qvest Media supplemented the technical resources for German public broadcasters ARD and ZDF for transmissions from the Winter Games in South Korea. As previously with similar major international sporting events, Qvest Media has supplied systems components for a temporary period based on the latest AV, IT and media technology that enable a seamless production workflow for both broadcasters between Pyeongchang in South Korea and Leipzig in Germany.

The Winter Games in Pyeongchang began for the global public on 9 February 2018. By this date, the technical departments of ARD, ZDF and Qvest Media had already worked together to create the technological base for live coverage of the Winter Games. Qvest Media accordingly supplied the broadcasters with the latest AV, IT and media technology from its rental pool in order to set up a networked, live production platform in the International Broadcast Center (IBC) in Pyeongchang and in the National Broadcast Center (NBC) in Leipzig. “A special challenge with these Winter Games was the extremely short planning and lead time,” explains Henning Miehe, Key Account Manager Rental Solutions & Services at Qvest Media. “Following the award of the project, we had less than four weeks in which to agree with the teams from ARD and ZDF on the technical details, plan deployment and make the logistical arrangements for the delivery of the system components.”

ARD and ZDF used the equipment supplied by Qvest Media to set up a live production platform specially designed for the requirements of live sports production and collaborative work using a robust systems architecture, fast and intuitive production workflows and high levels of data redundancy and availability. In essence, Qvest Media contributed completing components for a live ingest and playout installation, a post-production environment with non-linear craft editing workplaces for audio and video processing, a central storage system as well as multiviewer systems for production control and transcoder engines for format conversion. Furthermore, ARD and ZDF were able to access a turnkey system from Qvest Media for real-time graphics.

In the run-up to the Winter Games, Qvest Media supplied ZDF with a comprehensive Avid Interplay system for permanent integration with the Mainz-based broadcaster’s mobile production unit (MPU). File ingest into the Avid environment is effected via XT Access from the EVS network. This enables the production teams to import and provide video material using Avid Interplay. The material can be accessed and edited from the eight non-linear editing workplaces equipped with Media Composer workstations, before being transferred to the EVS playout server via Interplay Transfer Engines. In addition, Qvest Media temporarily extended the MPU to include AVID NEXIS E4 engines with total storage of 360 TB.

In order to further optimise the file-based workflow between audio and video editing, ZDF opted for an integrated Avid solution here as well. So, it was for the first time that Qvest Media equipped the broadcaster for the Winter Games with Pro Tools HD and an Avid S6 console for language synchronisation and film audio editing.

Following the Winter Games, the equipment will remain another month in Pyeongchang, where it will be used for the Paralympics beginning on 9 March 2018.

About Qvest Media
Qvest Media is a world-leading systems architect and ICT integrator in the fields of broadcasting and media technology, specialising in the television, media and telecommunications industries. The company, headquartered in Cologne, has additional locations in Europe, Middle East and Southeast Asia. With a powerful spectrum of services consisting of Consulting & Development, Systems Integration and Service & Support, Qvest Media offers 360° expertise in the design, development, implementation and operational support of media technology infrastructures. With its business unit Managed Technology, Qvest Media supports media organisations along their entire digital transformation process by covering everything from technology infrastructures to services and technical operations offered within streamlined and future-oriented payment models. In addition, Qvest Media ranks among Europe’s largest trade and distribution houses for technology in the fields of Professional AV, IT and Broadcast with a commercial portfolio of around 250,000 products as well as partnerships with nearly all major manufactures from the media and IT industries. Qvest Media is also one of the biggest suppliers of dry-hire equipment and systems solutions for live broadcasting of events, sports and entertainment. Today, the customer base includes eminent international broadcasters, telco providers and media networks such as ARD and ZDF, Sky, RTL, Al Arab, SRG, Al Jazeera, tpc switzerland ag, Mediacorp, beIN SPORTS, Dubai Media Incorporated, SES ASTRA, Etisalat, Turner Broadcasting, etc.