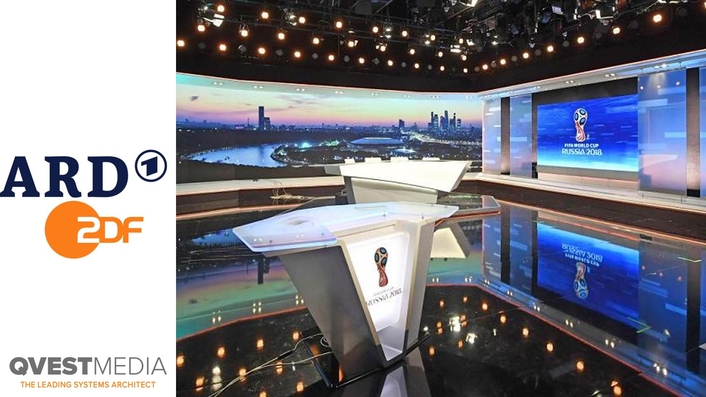 The public broadcasters ARD and ZDF are relying on dry hire equipment from Qvest Media to broadcast the World Cup from Russia. As before during the Winter Olympics in South Korea and earlier international sporting events, the internationally active systems architect and rental provider will complement the broadcasters’ technical infrastructure with IT, AV and broadcast technology and provide their technical teams with advice.

Among other things, the large distances between the twelve World Cup stadiums in Russia – the distance from Kaliningrad to Ekaterinburg, for example, is over 3,000 kilometres – prompted ARD and ZDF to expand their National Broadcast Centre (NBC) at SWR in Baden-Baden into the central studio for the World Cup. A stable connection between the SWR site and Russia is ensured by two redundant 10-GBit lines, which are used for 45 video lines alone. Agile production teams from the broadcasters are deployed locally in Russia. Qvest Media is equipping SWR’s mobile ENG crews with Sony PXW-Z450 and PXW-FS7 MK II camcorders and Fujinon lenses, among others. For live interviews, reporters also have at their disposal a pool of various wireless Sennheiser microphones and radio links, directional microphones from RØDE, tripods from Sachtler and other grip equipment from ARRI, Chrosziel, Bebob and Quickpole.

Qvest Media uses modern equipment for live sports productions to meet the temporary additional demand for media technology for centralised production in Baden-Baden. Central ingest, highlight editing, playout and replay are done with an installation of EVS components. These consist of IPDirector, XTAccess Ultra Performance servers and servers from the XT4K series, which can be flexibly used for ingest and playout.

Editors access raw video and audio material using four Avid NEXIS E4 shared storage solutions with a total storage capacity of 480 terabytes. One of the four high-performance storage facilities was already in use at ARD and ZDF. 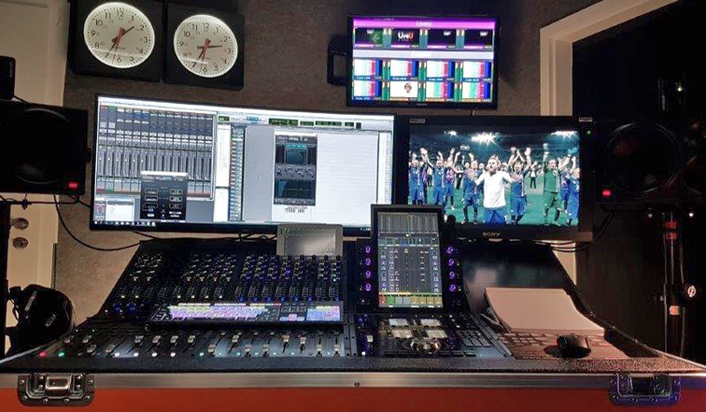 The Avid S6 System in Baben-Baden

For audio post-production, ARD and ZDF had already invested in two Pro Tools Ultimate systems including Avid S6 consoles for the Winter Games. These are now also being used for the World Cup.

For format conversion, the public broadcasters rely on Kudos equipment from SAM. UHD/HD conversion is done by an AJA converter. Qvest Media also complements the video monitor walls in the central studio in Baden-Baden. Evertz VIP-X multi-viewers are used for the interaction of the displays. Qvest Media ensures an efficient system configuration for the numerous workstations by means of an additional KVM matrix including workstation modules from the manufacturer Guntermann & Drunck, which supplements the stock of ARD and ZDF. 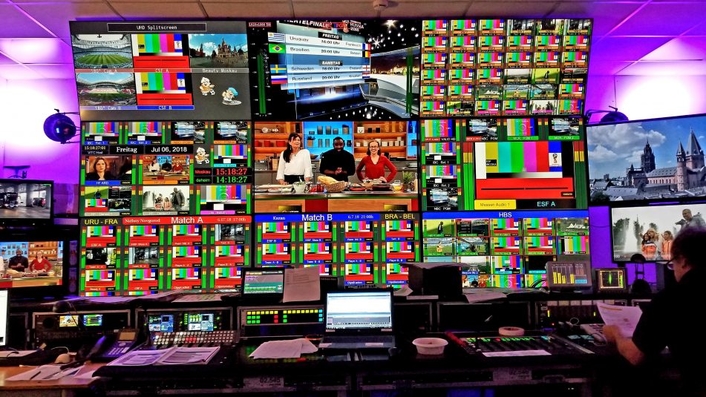 “Since the 2006 World Cup in Germany, ARD and ZDF have relied on our expertise and equipment for support at major sporting events”, says Henning Miehe, Key Account Manager Rental Solutions & Services at Qvest Media. “We are very pleased with this long-standing trust in Qvest Media, but we are aware that this must not be taken for granted and has to be earned anew at every major event.”

Once the World Cup is over, the technology will undergo an in-depth functional and quality check and be returned to Qvest Media’s rental pool. Selected equipment is then also offered for sale at special rates through Qvest Media Sales.

Qvest Media is a world-leading systems architect and ICT integrator in the fields of broadcasting and media technology, specialising in the television, media and telecommunications industries. The company, headquartered in Cologne, has additional locations in Europe, Middle East and Southeast Asia. With a powerful spectrum of services consisting of Consulting & Development, Systems Integration and Service & Support, Qvest Media offers 360° expertise in the design, development, implementation and operational support of media technology infrastructures. With its business unit Managed Technology, Qvest Media supports media organisations along their entire digital transformation process by covering everything from technology infrastructures to services and technical operations offered within streamlined and future-oriented payment models. In addition, Qvest Media ranks among Europe’s largest trade and distribution houses for technology in the fields of Professional AV, IT and Broadcast with a commercial portfolio of around 250,000 products as well as partnerships with nearly all major manufactures from the media and IT industries. Qvest Media is also one of the biggest suppliers of dry-hire equipment and systems solutions for live broadcasting of events, sports and entertainment. Today, the customer base includes eminent international broadcasters, telco providers and media networks such as ARD and ZDF, Sky, RTL, Al Arab, SRG, Al Jazeera, tpc switzerland ag, Mediacorp, beIN SPORTS, Dubai Media Incorporated, SES ASTRA, Etisalat, Turner Broadcasting, etc. www.qvestmedia.com